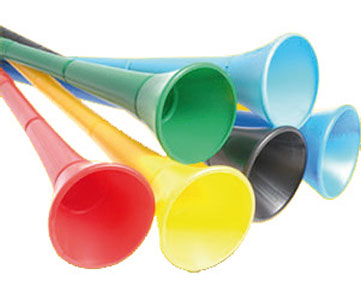 Soccer has a worldwide reputation for having the loudest spectators. In Brazil matches are accompanied by the beat of samba drums, in Switzerland it’s the ringing of cow bells, in Britain it’s raucous singing and in South Africa, well it’s noise in general.

Soccer has a worldwide reputation for having the loudest spectators. In Brazil matches are accompanied by the beat of samba drums, in Switzerland it’s the ringing of cow bells, in Britain it’s raucous singing and in South Africa, well it’s noise in general.

This noise even transcends to everyday life. The blasting of vuvuzelas for example alerts Grahamstown residents to yet another strike long before there’s a picket in sight.

A vuvuzela, which needs no description or introduction, is also known as a blowing horn and is said to be rooted in South African culture although there is some dispute over this.

In 2001 South Africa’s Masincedane Sport began to mass-produce what was a tin horn into the gaudy plastic version we know so well today.

There have been many appeals for the banning of these racket-makers in stadiums as some players and (the more reserved) spectators have found them a distasteful distraction.

The defence? Vuvuzelas are a part of South African culture. It’s obvious that the lovers outnumber the haters of these flatulent cylinders, as sales are fast increasing as the World Cup gets closer.

The official Vuvuzela Company has received large orders, some for more than a million horns. On a smaller scale, Pick n Pay is marketing a 120 decibel pillbox-shaped horn as “the first mini vuvuzela” a handbag friendly alternative.

The kuduzela, an only slightly less popular horn, has recently been mass-produced also in the multi-coloured, plastic form and bought by FNB as a promotional gift.

This twirled tweeter was modeled on the traditional kudu horn used to call people together for gatherings, imbizos and, more relevantly, battle.

According to David  Mabunda, chief executive of SANparks, the kuduzela will call South Africans and international guests to the “symbolic battlefield of soccer”.

The whistle is another common earsplitter and has lately reinvented itself in the shape of, you guessed it, a soccer ball.

However, many talented  windbags don’t even need the actual device to whine merrily away for up to 90 minutes.

Despite its lack of  necessity it is still very popular although overshadowed by its cumbersome cousins. Wind emitters aren’t the only noise devices within South Africa’s culture of sound. Drums are an important part of African tradition.

In Mike Rossiter’s Drums in Tradition he refers to Africa as the Drum Continent “because nowhere  else in the world has a greater range or type of drums”.

The skill required for this moving  musicmaking seems to be profuse with rhythmic pulsations vibrating along stages and streets alike.

The  drum’s popularity looks set to hammer on in the sound scene indefinitely but it seems to lack the appeal  that blowing on an elongated tube has for most South Africans.

It’s part of their celebration and of their culture, let them blow their vuvuzelas.” It remains to be  seen how our international guests will feel about 30 000 vuvuzelas worth of South African culture smacking their eardrums at the speed of sound.

How to use a vuvuzela

Blowing a vuvuzela requires a certain amount of lung strength and mouth dexterity. Your first time is sure to be a failure, so success requires practice (an unfortunate procedure requiring more heinous hooting). Keep a glass of water handy to replace the spittle you may lose. Vuvuzela supplier Boogieblast offers these directions:
•Put your lips inside the mouthpiece and make a ‘raspberry’ sound (the sound you would make if blowing on a baby’s belly).
•Relax your cheeks and let them flare out as your lips vibrate inside the mouthpiece.
•As soon as you get that blasting sound, blow harder until you reach the trumpeting crescendo.
The sound it makes
Up close a vuvuzela sounds like a trumpeting elephant but from afar many vuvuzelas blowing together sound like a swarm of angry bees. If done incorrectly the sound emitted can only be likened to that of a small, wet fart. There are rumours that the horn can be musical.

How to use a kuduzela

A kuduzela is blown the same way as a vuvuzela. Although traditionally kudu horns have openings on the side near the tip so that you would use them as you would a flute, kuduzelas have openings on their tips to make usage easier. The kuduzela emits a similar sound to that of the vuvuzela as up close it also sounds like a trumpeting elephant. However, it lacks the angry insect buzz when played in a group.

How to use a World Cup whistle

The only difference between a normal whistle and a Fifa Confederations one is the shape of the barrel (and the price tag). Soccer whistles work exactly the same way normal whistles do. The noise of a whistle is shrill and high-pitched compared to that of the ’zela family. In unison with others it is effective in creating the swarm of mosquitos atmosphere.

How to use a drum

A drum requires something to be banged against it, a hand, a stick or even a vuvuzela(a more sensible- and eardrum-conscious use for the screeching tube perhaps). Drums emits a loud, reverberating beat which in a stadium might achieve what the droning ducts have not and inspire Bafana Bafana to victory.