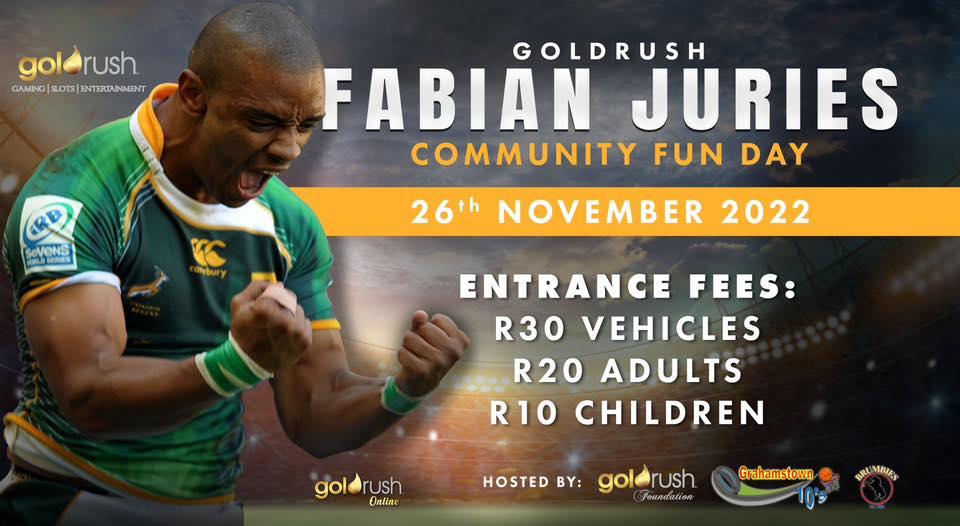 The legendary Fabian Juries Community Fun Day will kick off at the Oval Sports Ground at 8.45 am on Saturday, 26 November, featuring ’10s’ rugby and netball teams from nine community areas in the city.

The tournament is hosted by the Grahamstown Brumbies Rugby Club, part of the South Eastern Districts Rugby sub-Union (SEDRU).

The event, first held in 2013, is designed to bring Makhanda’s communities closer together, encourage youth to play sports in local clubs, and raise funds. Besides the National Arts Festival, this is arguably the most well-attended community event in the city.

The purpose of sport

Speaking at Thursday’s event, Eastern Province Rugby Union president Maasdorp Cannon, said the purpose of sport was twofold, first for recreation and for secondly it is driven by the “desire for liberation”.

Cannon, who is based in Makhanda, said the struggle against Apartheid was driven by sports people from the 1960s up to the 1980s. “No one internal political organization can claim the right to liberation – no one except the people themselves. And at the centre of it were sports people.

“I grew up in Grahamstown and am still living in Grahamstown. I never thought of the possibility of leaving my drug-infested area. We can only challenge social ills if we are a united front. Even if it means that we challenge the governance of the town.

“I’m not a politician – I’m very much a sports person. But, I learned my politics in sports when we said there should be no normal sport in an abnormal society.

“Apartheid is still very much alive. Nowadays, it’s expected of all of us to compete on equal terms with people who have the resources. But, I am still saying there can be no normal sport in our abnormal society,” Cannon said.

“Is South African rugby transformed? I am asking that question and I’ve answered that question. And I say no, it’s not transformed. Because if you look at it systemically, it’s based on a system of race. If support of the Springboks is the measurement of a standard, then I say we are all selling out,” he said.