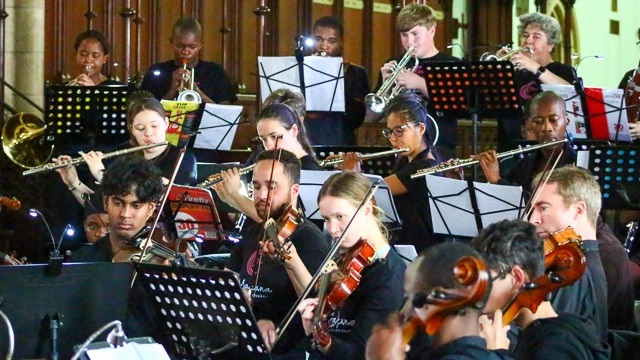 Members of the Makana Community Orchestra at the inaugural concert. Photo: Sue Maclennan, Talk of the Town

Load shedding did not deter the newly-formed Makana Community Orchestra at their inaugural concert on Sunday, 13 November 2022, at the Cathedral of St Michael and St George.

Musicians sat in the dimly-lit Cathedral with battery-powered lights shining on their sheet music. Just after noon, the historical building showed off its resounding acoustics as the Orchestra treated the substantial audience to a stunning 45-minute show, including film music, boisterous marches, some Haydn and a sax and clarinet quintet.

The Orchestra comprises young and old community members from east and west of Makhanda and as far as Peddie, all playing alongside each other.

“What you see before you belongs to you,” said the Conductor and Head of the Music Department at St Andrew’s College, Johan Pretorius. “This community project is by Makana for Makana.”

Head of the Music Department at Rhodes University, Dr Boudina McConnachie, said she had the idea to start the orchestra years ago. When she received seed funding from the Dean of Humanities’ discretionary fund in September this year, the Orchestra committee immediately sent call-outs for prospective members.

Kingswood College director of music, Nici Coleman, the principal trumpeter in the Orchestra, received a call-out in September. Four of her learners and four fellow Kingswood teachers are now in the Orchestra.

Practice sessions commenced soon after the call-outs and occurred every Friday evening.

“It’s become the best way to end my week,” said Coleman. “Although everyone is exhausted by Friday evening, by the time our practice is over, I am so happy I went and look forward to the next one. I feel the same about Sunday’s concert – it was so successful; I can’t wait to perform in the next one.”

According to McConnachie, the seed funding covers the transport of members and a stipend for the conductor, who is responsible for music selection and leading practice sessions, among other responsibilities. “However, from next year, the orchestra will be self-sustaining, with profits from the concerts covering these costs,” she explained. The audience turnout for the inaugural concert exceeded expectations.

Probably the most remarkable aspect of this Orchestra is the benefits it provides – for both the audience and the members.

McConnachie hopes that the Orchestra inspires more youngsters to take up an instrument, which will feed the Rhodes University Music Department.

Coleman has similar hopes regarding our youth. “Our Makana kids don’t often get the opportunity to see a symphony orchestra, which is a pity since we teach them about orchestras at the school level. With our own community orchestra, they can now experience it through watching a show which could even inspire them to want to be in it,” she said.

As music director, Coleman said she never gets to play with her learners, but the Orchestra has provided this opportunity. “I get to play with them, and they get to play with me. They get to see how I perform in a ‘professional’ setting and learn from that. While I, on the other hand, must make sure I maintain that ‘professionalism’ in front of them because I am aware that they are watching me and emulating me,” she said.

For all those who missed the inaugural concert, or those who attended and thoroughly enjoyed themselves, McConnachie has assured that these concerts will become a regular event on the Makana calendar. “We plan on having one in March next year, so watch this space!” she said.