Take a bow, you SEPs! 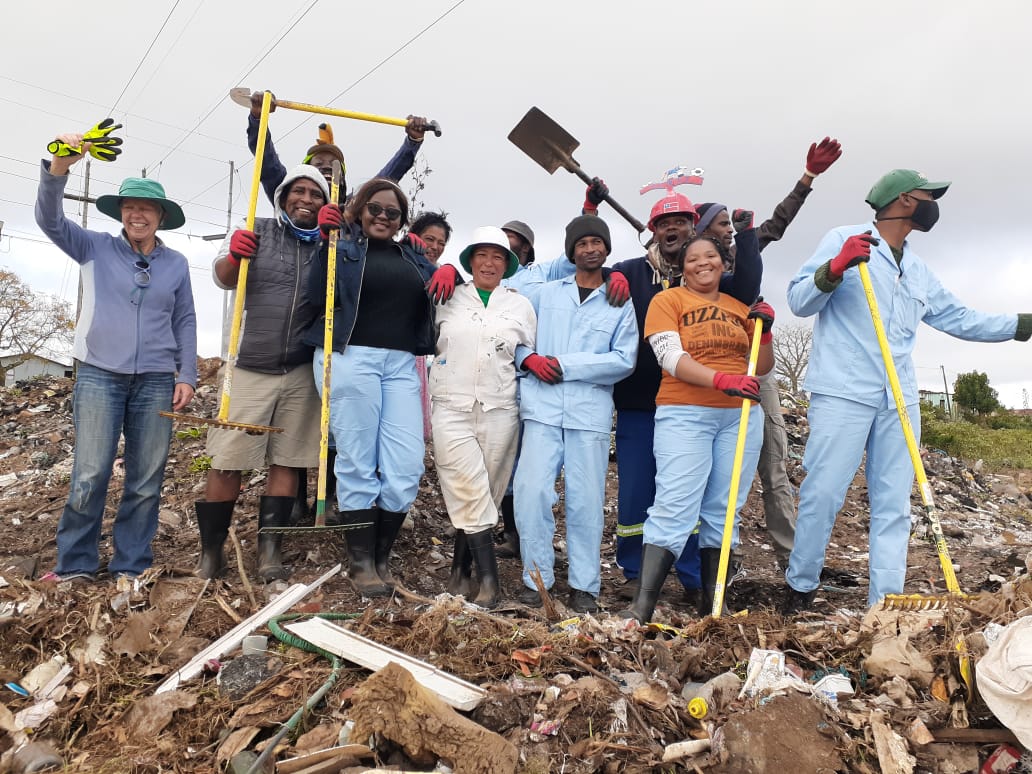 Slowly, incrementally, an army of more than 2000 young Makhandans – funded by the Government and managed by the National Arts Festival, the Assumption Development Centre, Awarenet and Assitej – is rejuvenating our city.

In the wake of the Great Depression, from 1933-1939, US President Franklin D Roosevelt’s New Deal public works programmes provided support to improve the lives of millions of farmers, the unemployed, the youth, and the elderly.

And, in the wake of the Covid-19 pandemic and South Africa’s ‘lost decade’ of corruption and economic contraction, the SEP is doing something similar in our city.

Sadly, the programme will end in March 2023, but the extraordinary evidence of their efforts is already hearteningly visible.

The SEF was announced by Minister of Trade, Industry and Competition Ebrahim Patel in June. It has created 50 000′ common good’ jobs in rural and semi-urban communities around the country. It is one of the strategic interventions under President Cyril Ramaphosa’s Employment Stimulus package, announced under lockdown in October 2020.

Over 1600 of 2000 SEPs are managed by the National Arts Festival (NAF) based at the Monument. NAF has brokered internships for the workers until March next year for R23.19 per hour. The interns each work up to ten days a month.

He said the massive influx of young SEP workers came from all walks of life, from people with Master’s degrees to those with a Grade 4 education.

“We are split into various groups: Some collect all the rubbish; some are qualified in removing invasives from all the waterways (and also clean those areas); some are specialists who fix potholes; some – qualified electricians, painters and plumbers – have been deployed in the schools.”

The project’s impact on the interns

“Logistics is complicated. But businesses like Buco have been loaning us their vehicle the whole time. People have been very gracious and giving wherever we have worked,” he said.

“It’s been incredible when people who haven’t had a job for ten years get paid. All of a sudden, they’re getting a paycheck at the end of the month. And it’s made such a difference in 1600 people’s lives in Makhanda.

“And they are all making a difference. They have pride in the work they do.

“At times, people stop on the road and ask, ‘How many people does it take to hold a spade?’ But you must understand we have untrained people we are training,” he said.

When the project ends at the end of March, Haakonsen said 1600 more people would go into the community to help to pass the message on about throwing away rubbish – putting it in the right place.

“We will have qualified people to help fill the potholes – jobs that will always be needed. We have people that are qualified to go and help in the schools.”

“We are starting vegetables with Umthathi Training Project out in Extension 7 and cultivating vegetable gardens in all the schools. We have begun feeding schemes at the Black Power Station and Umthathi. We have vegetable nurseries, and we are trying to get irrigation schemes up and running and then supply them with seedlings.

“We are also starting markets so that people with excess in their gardens will have a place where they’ll be able to sell vegetables and arts and crafts.”

The need for tools and materials

Eighty per cent of the budget is spent on wages, and 20% goes on everything else – vehicles, fuel, plastic bags, tools, and materials. The project uses approximately 1500 plastic bags per day to collect refuse.

“We use the budget for these bags. But also for the tar that goes into fixing the potholes. It’s to pay the specialists we have on the ground,” Haakonsen said.

But, each intern is supplied with overalls and gloves.

Pride in the project

“You cannot believe what’s coming from some of the areas we are working in. If you go up Raglan road and see at the bridge there the work that our staff have done, it’s absolutely incredible.

“I’m extremely proud to be part of this project. And of the people we have working for us, they are trying. So when you see them, I’m just asking, please encourage them.

The SEP is working on the badly damaged road around Graeme College. “We have the expertise and the people who can fix the roads.

There’s no labour cost involved, but the project needs materials. “We’ve put together a R120 000 budget for the materials to fix the roads in that area, from Miles Street, through to the cricket nets, the whole of Templeton and a little bit on Selborne.

“We cannot just go in, dig out the pothole and fix it. Water is a huge problem. Every single drain is blocked. When you see the manhole covers taken off and hundreds of white pea bags on the side of the road, that’s all the ground that’s come out of the stormwater drains.

“It’s pointless for us to go in and fix the potholes without fixing the structure of the road.

“That’s why you see many people on the side of the road and a few people fixing the potholes. We have trained people, qualified people that do the pothole repairs. And we are teaching and empowering other people.

“At the Black Power Station, we have a composting and chipping factory that processes all the stuff – including invasives – coming out of the drains. We will be selling that compost!” Haakonsen said.

“And we have trained a team to recycle plastic bottles, glass, and other recyclables. We are hopeful we’ll get a proper little chipping machine for all the plastic extruders so we can start making recycled paving blocks for the sides of the roads.”

NAF’s Nicci Spalding is also helping to coordinate the trial SEF project. She said it was not an “ideal project as we are guinea pigs”.

“One of the best things we have going for us is to go, ‘Yes, we’re going to give it a go rather than not. It’s well outside of what the National Arts Festival would typically do. And there’s lots of stuff that we’re getting wrong.

“But, we’re four months in, so hopefully, we were correcting that.”

“We do appreciate getting feedback. But the guys on the ground need encouragement. Sometimes, they’re not doing the right thing – nobody’s perfect, least of all us.”

“There isn’t a section within the city that we don’t touch.

“One of our biggest pushes is to get past the cleaning into the maintenance of the project. ‘What can a group of people who take control of their environments achieve after that?’

“If you start to break the cycle of unemployment, what then becomes possible in terms of investment – what with a little bit of business training and a little bit of upskilling, can a person then be empowered to achieve. That’s the way that this project is going. We’ve got a nine-month window to break the back of it – and hopefully, we get into the next phase of the project.

“But it is going to be a very bumpy ride. And we have to prove ourselves every step of the way. And the communities do have to prove themselves.

How can we help?

“The buy-in from the community has been big wherever we go – from Extension Seven to Ghost Town to Fitzroy. People drop things off things – and they ask, how can we help? What can we do?” Spalding said.

“One of the things that we can’t do is raise cash. We have opened deposit accounts with the three big hardware stores in town. So BuildIt, Cashbuild, and Buco all have deposit accounts you can deposit straight into.

“Or if you have excess garden tools, that’s one of the biggest things we need. They can be dropped off at 3 Queen Street at our warehouse opposite the taxi rank.

“If somebody has an area you want us to work in, we would be delighted to do that. For example, St Andrews has donated money to fix roads in their area.”

We are not an infrastructure company!

Spalding said SEP was “not an infrastructure company” and was not trying to “take over anybody’s work. We have tried as much as possible to work with the Municipality. We don’t want it to be seen as confrontational.”

“At the moment, we can see tasks we can fix, and we have an MOU with the municipality to outline the scope of work and what we’re capable of doing. We have very competent people working with us, but we know the scale of the budget and what it can tackle.

“Our funds do not come from local government budgets – we support the municipality’s work. There isn’t a step that the municipality isn’t aware of. We’re not an infrastructure agency, but we do care,” Spalding said.

Previous ArticleWater supply improves – for now
Next Article Behind the camera: A creative director in Makhanda