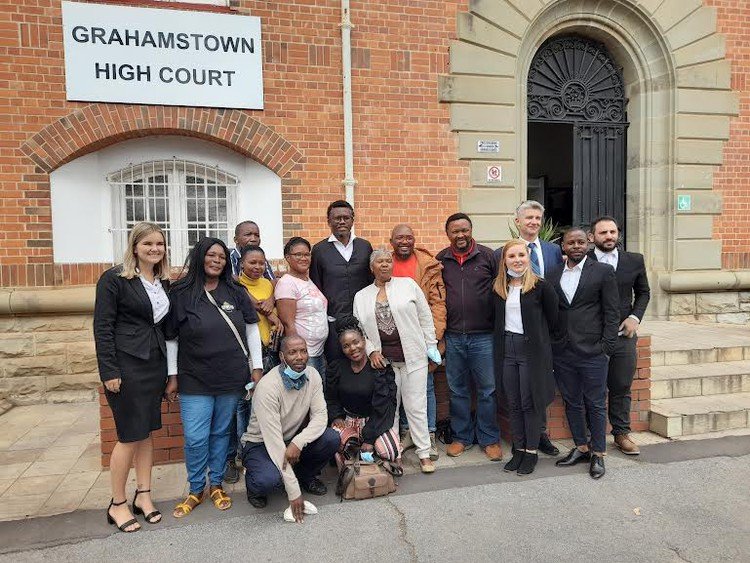 Lawyers and parents of children affected by the lack of textbooks and stationery, outside the Grahamstown High Court in March this year. A jurisdiction rationalisation committee has recommended that the main seat of the high court be moved to Bhisho. Photo: Lucas Nowicki

A committee set up to ‘rationalise’ areas under the jurisdiction of South Africa’s high courts has recommended that the main seat of the Eastern Cape High Court, currently in Makhanda, be moved to Bhisho.

Local lawyers have warned that this will limit the area of jurisdiction of the Makhanda division, drastically reducing the amount of work coming to our court.

A similar proposal to move the main seat of the Eastern Cape High Court to Bhisho was made in 2009, but Makhanda waged a successful two-year battle against it. The campaign united the city with local government, schools, lawyers, NGOs and 10 000 diverse signatories to a petition protesting the move.

The interim report of the ‘Committee on the Rationalisation of Areas Under the Jurisdiction of the Divisions of the High Court of South Africa and Judicial Establishment’ argued that “ordinarily, the main seat of a provincial division of the High Court is located in the capital of the province”.

A local attorney said they expected an official gazette would be published on Friday, but for now, the interim report and details have been posted to the Department of Justice website: https://www.justice.gov.za/legislation/invitations/invites.htm

Page 70, paragraph ‘m’, of the report recommends relocating the main seat of the high court to Bhisho.

Comments and submissions on the interim report can be submitted by 31 January 2023 to Makena Z Moagi (Email: MakMoagi@justice.gov.za) or Adv Seakamela (Email: SSeakamela@justice.gov.za).

At a Ward 4 and 8 community engagement meeting at City Hall on Thursday, 10 November, a participant said the issues of failing infrastructure and lack of water services “are definitely fuel to the argument” to move the high court.

“Every law firm in this town is losing revenue. A change in jurisdiction areas will impact the town economically.”

She said the Magistrates’ Court could run for just two or three days a week, depending on the water supply at the height of the crisis.

“Services are inaccessible after lunch or by 11 am on no-water days at the Magistrates’ Court. To their credit, staff at the High Court work full days and make contingency plans to keep the court functional,” she said at the meeting.

Dr Sizwe Mabizela was Deputy Vice Chancellor of Rhodes University and chair of the High Court Action Committee at the time.

At a victory press conference in 2011, Mabizela said the proposed move had united Grahamstown across party and racial lines. “It really was something wonderful to observe; just about every dimension of Grahamstown was behind this.”

He called it a victory for “the power of constitutionalism” when members of the public put their views across to a democratic government that “actually listened”. He said a personal representation by Anglican Archbishop Thabo Makgoba to justice minister Jeff Radebe had appeared to swing the minister’s mind about the matter.

The minister had been open to discussing the high court issue and had listened intently. “He wanted to understand,” the archbishop had told Mabizela.

Attorney Brin Brody, also a member of the action committee, thanked the Minister of Justice, Mabizela, committee member Margie Keeton, and the archbishop. “The legal profession is highly grateful to them; they saved Grahamstown,” Brody said.

Mabizela thanked the media for educating the general public about the possible consequences of the proposed Bhisho move “and illustrating how disastrous it would have been. “The media played a vitally important role,” Mabizela said. “I don’t think there will be any future intention of moving the High Court from Grahamstown.”

Committee member Margie Keeton cited the proposed bill’s outcome as “evidence that the government can listen, hear, and change its mind”.

In a previous press statement in 2011, the Grahamstown Attorneys Association wrote that relocating and rebuilding the courts would cost taxpayers between R300 million and R400 million. Considering inflation, Grocott’s calculated those costs would be closer to R1 billion by 2022.

The 2011 press statement also said Grahamstown’s loss would not benefit Bhisho, as many of the people working in Bhisho lived in East London anyway.