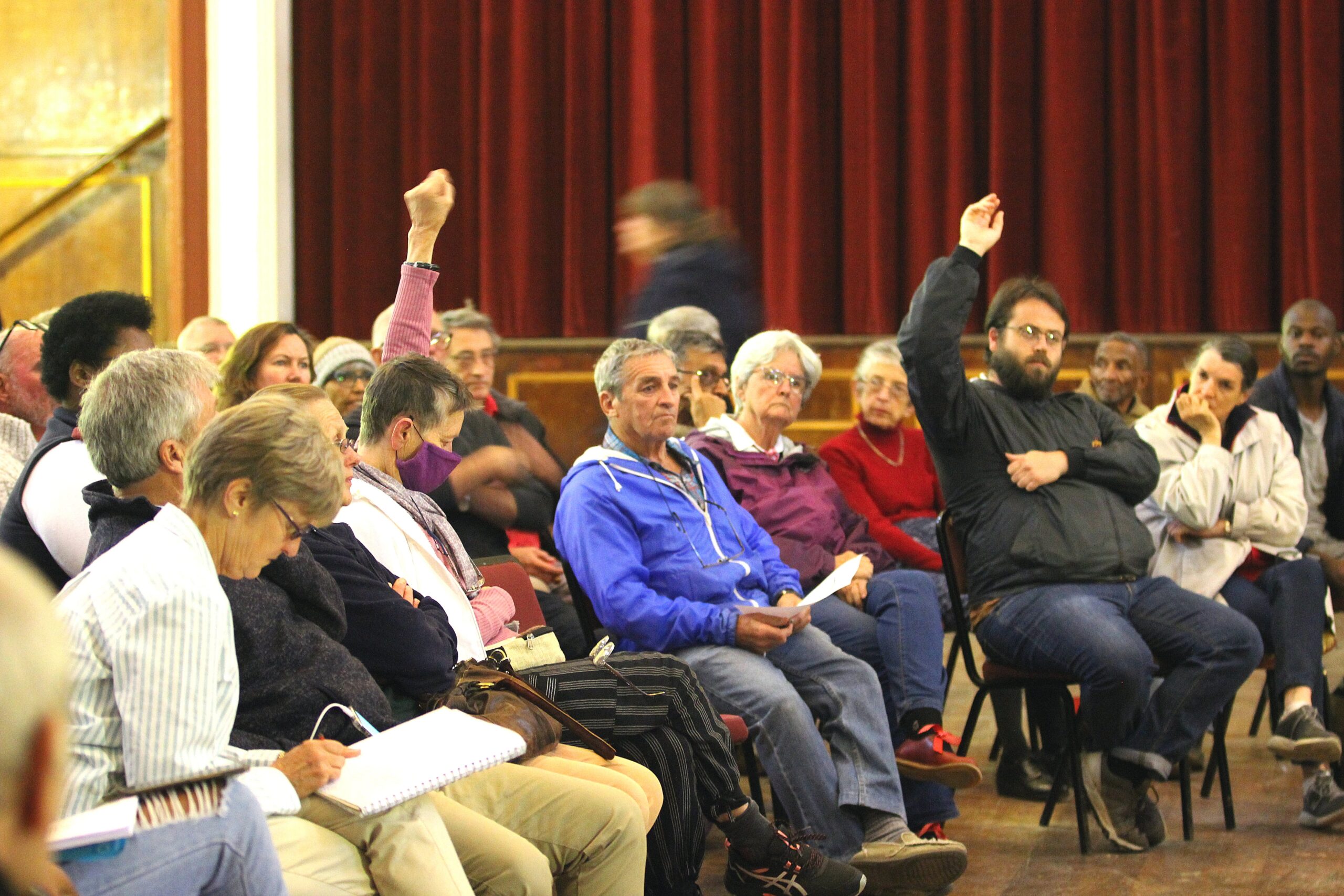 At the meeting, Peter Sturrock said it was “an absolute insult” that nobody from the municipality’s department of water and engineering was at the meeting.

Commenting on the Ward 8 WhatsApp group, Helen Holleman said the no-show “shouted loud and clear, ‘We don’t care about you lot'”.

“But I think I also hear their inaction saying, ‘We’re scared’,” she said.

At the meeting, Ward 8 councillor Cary Clark said she asked the same questions repeatedly in Council meetings. “I feel like I’m banging my head against a brick wall. I put in motions and questions that don’t get submitted. I don’t get responses.

“This is exactly why I wanted the powers who make the decisions on the ground to be here to be able to answer exactly the community’s questions.”

The months-long water crisis dominated deliberations at the meeting.

“Without water, businesses can’t operate. Schools can’t operate. Nothing can operate until we get this right. It’s bigger than us. Which is why we’ve escalated it to the Department of Cooperative Governance and Traditional Affairs (COGTA),” Clark said.

“Council meetings are supposed to be open. Unfortunately, at the last council meeting, the Speaker had an open and then a confidential session. So community members and the press left – and then he introduced the issue of water, which should have been open to everybody.

“One thing the Speaker did say was that they would apply for disaster funding regarding the water crisis. That is Makana’s plan.

Clark said she suggested to the Speaker that he start a water workstream full of knowledgeable locals with engineering expertise and who have worked in the municipality before and know the system.

Clark said that while she understood why ratepayers might want to boycott, it was illegal.

“If that’s the route you’re going to take, just don’t end up on the wrong side of it. This is not a protest meeting; it’s just a feedback meeting.

Ward 4 councillor Geoff Embling said that of the R20 million a month Makana collected in rates and taxes, the bulk of it went towards the wage bill.

“Our biggest problem is wages, we’ve got about 700 employees, and the money gets blown on wages. We get municipal infrastructure grants and other funding streams, but they are specified for big projects. So you can’t go and fix little potholes here or electrical cables.

“Unions basically control the municipality – anyone shouts about wages, they’re going to be shut down. It becomes a political problem. We can’t suddenly fire half the staff and then use the rest of the money for service delivery.

To their credit, staff work full days and make contingency plans in order to keep the court functional, she said.

A commission into the “Rationalisation of Jurisdictions of the Eastern Cape High Courts” will publish an interim report in early December, Asmal said in a Facebook post.

“There are calls from some for a revival of the discussion to relocate the seat of the court. The issues of failing infrastructure and lack of water services are definitely fuel to that argument.

“Every law firm in this town is losing revenue. A change in jurisdiction areas will impact the town economically,” Asmal said.

She wanted a realistic time frame for the resumption of water services.

In response, Clark said she had requested the presence of the municipal leaders to give these answers.

“I can’t talk on their behalf. We fight in Council – we asked the same questions,” she said. “I work for the Municipality, but I am not defending them.”

“The minutes of this meeting will go to the hierarchy at the municipality so that they are aware of all your questions that I can’t answer.”

“It is time to stand up before we lose the high court, the schools, the university, or the businesses that have been here for generations that are looking at closing or are closing or have closed already.

“Otherwise, we might as well pack your bags and go,” Clark said.

A delegation to the Municipal Manager

Peter Sturrock suggested that a delegation – “independent of councillors, ward committees or anything like that” – go to the municipal manager’s office within the next few working days to demand a meeting with him.

“We must not leave until we get a meeting with him and put some of the grievances of this meeting across,” he said.

A group of residents signed up to be part of that delegation.

However, Tainama was then awarded another contract for Makana’s Bulk Sewer Phase 1. While the project is marked ‘finished’ in the committee report, a councillor said residents had complained that some sewage pipes were still not connected.

Makana Infrastructure director Asanda Gidana said Tainama could not be discounted from bidding for the second tender for legal reasons as they feared litigation.

“The reason the director gave was they were scared that the contractor would sue them if they didn’t give them the tender. I find that very problematic and very suspicious. Because surely any sensible organisation, if a contractor does not finish a job that they were contracted to do, you don’t give them another tender for another job,” she said.

Embling agreed. “It is absolutely ridiculous that the company would mess up and be chosen again. The reason is that municipality had failed to send some documents in time, so legally, the company was allowed to reapply. But then, who chooses the contractor?”

Clark said councillors were not involved in the awarding of tenders. “What we have done over and over again is to question why proper due diligence is not done when contractors are approved or before they actually win the bird. Where were you before? Why did you leave? Did you leave under a cloud? What happened there?” he said.

I want a shower!

One participant said residents were “g*tvol”.

“I was able to shower last Sunday morning – since then, nothing.”

“But, all this technical detail does not solve our problems. What can we as residents do to stand up and do something constructively to force the powers that be to listen to us.”

“When will we draw a line and say enough is enough?”

In response, Clark said she would throw the question “straight back at you guys”.

“I think it’s going to start with Peter and the delegation that goes, and the response from that will determine how you react. It’s gotten to a point where everyone in this town needs to stand up and say, enough is enough.”

“As councillors, we are hamstrung. I can’t tell you don’t pay rates. I will say you should advise the senior Makana management that a lot of people are out there saying they are not going to continue to pay rates and taxes,” Clark said.

Philip Machanick suggested another strategy was to place the water infrastructure under the supervision of the court. “You do this by setting particular conditions of things that must be done and then getting the court to appoint a special master — the person appointed by the court to supervise the court order. But we would be excellent legal support for that because appointing a special master is a difficult process; you’ve got to persuade the court that it is not intruding in the space of government (and is observing the separation of power),” he said.

“The other thing is that the ANC majority here is wafer thin. So we must remember that the ANC is not super popular among the electorate here. We could produce a monster petition with 20 000 signatures and mobilise people for a big protest if we could reach out to members of the township community. There are 35 000 people in the Facebook Anti-Crime group. That’s a lot.

“We need to find a way to do it as a community effort, not just as a particular organisation – it needs to be very broad based,” Machanick said.