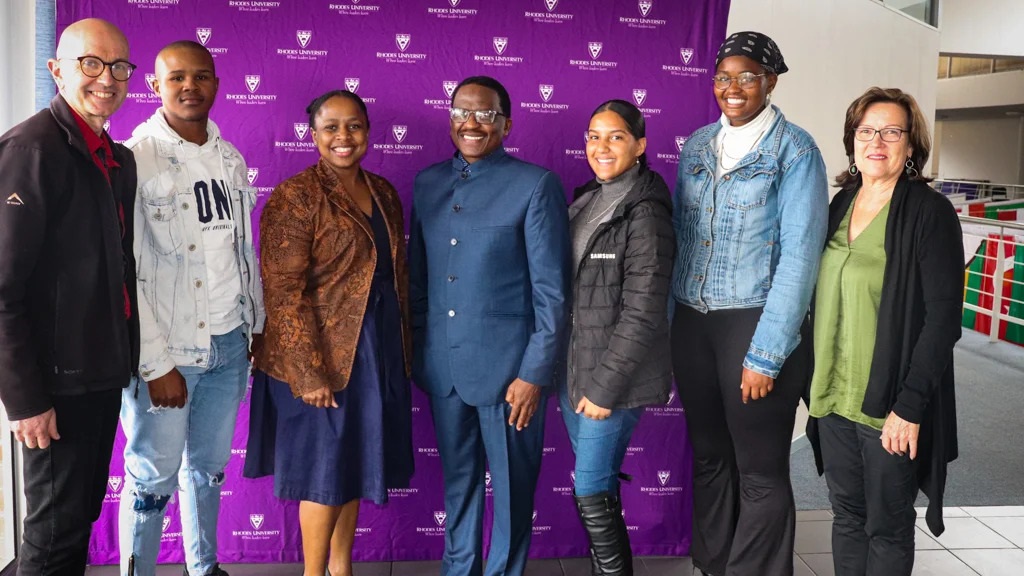 A representative of the Nedbank Eyethu Community Trust, which currently supports 45 students to do bridging courses at Rhodes University, said on a recent site visit that the programme gave her “goosebumps”.

Nedbank Eyethu Community Trust representative, Bulelani Ntuli, said she was exceptionally pleased with the partnership between Rhodes University and GADRA Education. “What I have witnessed here today, seeing the beneficiaries of our support as an organisation, and the eagerness from the Rhodes Vice-Chancellor, Dr Sizwe Mabizela and project leader, Diana Hornby, gives me goosebumps,” she said.

Nedbank has supported the fund since 2019 and allocated R1.35 million for the current academic year towards the bridging course.

Speaking at the site visit, Mabizela said the Nedbank funding enabled learners from Makhanda local schools to improve their matric results at GADRA Education and get an opportunity to do one or two modules at Rhodes University.

“Nedbank supports such an important programme as it creates opportunities for young people to realise their dreams. We can never give up on our young people. My dream is to make Makhanda a centre of educational excellence. I hope we can also partner with Nedbank in sustaining the quality of teaching in Makhanda,” Mabizela said.

GADRA Education (the holding organisation of Gadra Matric School) partnered with Rhodes University in 2015 to assist with the vision of Pathways to the Future, spearheaded by Mabizela, upon his inauguration. The initiative addresses unequal access to quality education in Makhanda through various programmes.

One of the students, Mawande Kwitsani, was doing grade 12 at Ntsika Secondary School in 2021. He is upgrading his History subject at GADRA and taking Politics and Psychology at Rhodes University. “Dr Westaway was going around schools last year talking about the bridging programme, and when I received my results, and they were not good enough, I knew I would have a second chance with GADRA,” Kwitsani said.

The 18-year-old said he was grateful to Nedbank for funding his studies. “I am now learning how to structure essays, and if it were not for this programme, I would have too much pressure when I get to University next year. It helps make my transition to Rhodes University smooth,” he said.

Tyrah Sybil-Joykonck, who hails from Cape Town, is upgrading two subjects (Business and Geography) at GADRA. She is also doing Politics at Rhodes University. “The experience from this programme has been so exciting. It allowed me to know and meet the standards Rhodes University expects from its students and has helped me think outside the box. My marks have also been amazing at GADRA,” said 19-year-old Sybil-Joykonck.

Asisipho Lokwe from Joza is upgrading Maths and Physical Science at GADRA and doing Zoology and Cell Biology at Rhodes University. Her initial dream was to do Pharmacy at Rhodes University; however, she was rejected due to an unsatisfactory matric performance. “Dr Westaway told me about the bridging course I started this year. It has greatly helped me and taught me how to manage my time. I will be better prepared next year when I am a full-time student at Rhodes University,” she said.

Mabizela said the students would be given credits for their modules at Rhodes University when they come to study full-time in 2023. “Investing in education is investing in the future. The Rhodes University bridging programme is a tried and tested, impactful means of getting young people from a position of deficit education to socially engaged, environmentally concerned young graduates who can enter the green economy, either as employees or entrepreneurs.

“The programme has been specifically designed to enable young people with immense potential to embark on their university studies by initially doing one Rhodes University credit while also improving their NSC at the GADRA Matric School,” Mabizela said.

Previous ArticleGet out and run and/or ride to the sea!
Next Article Municipalities are failing to provide clean water: citizens are stepping in to fix the problem