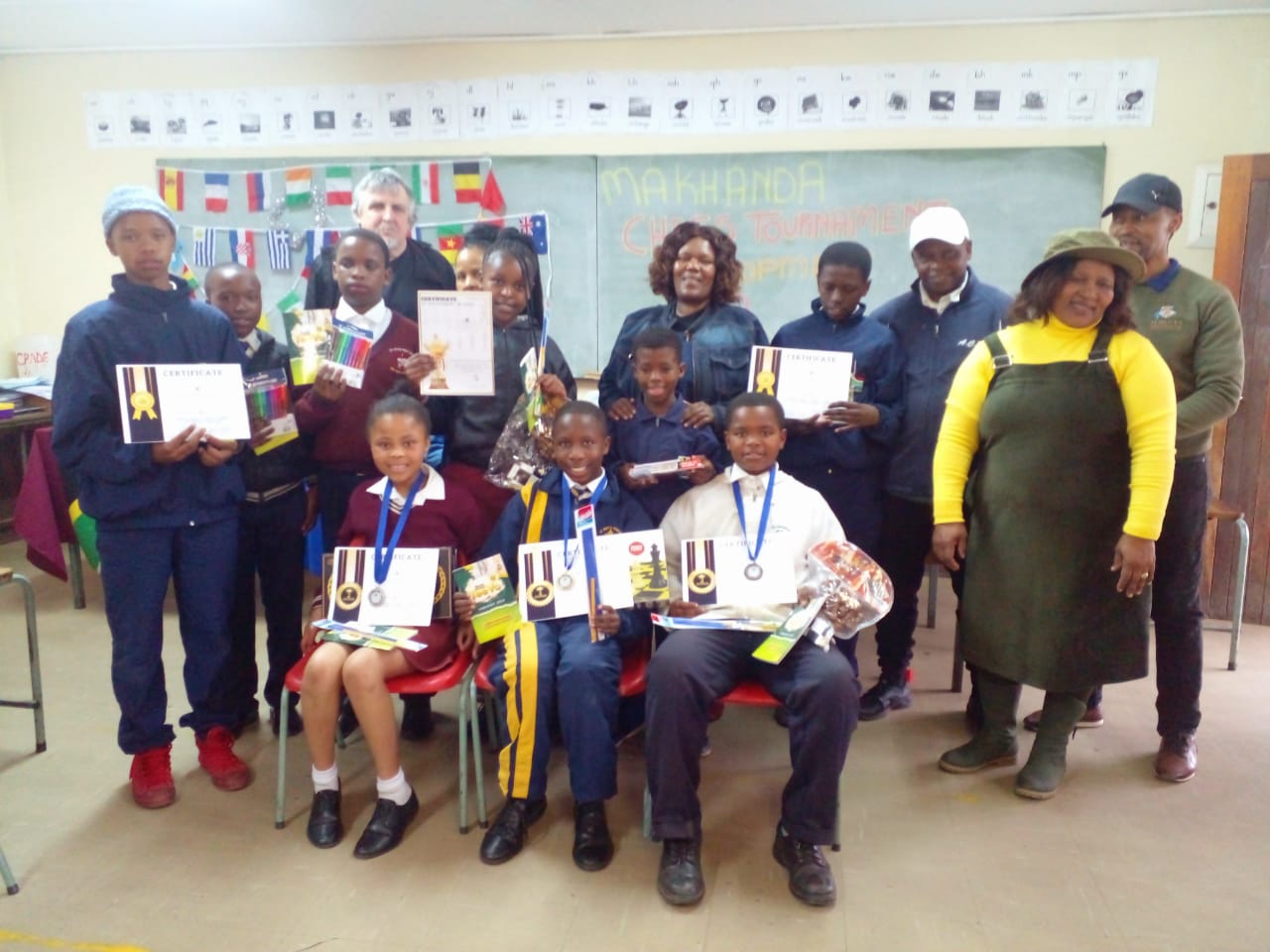 The overall winner, Tanaka Dzafunwa (in the middle, seated), with Iyolakha Dondashe (on his right) and Luvano Vubela (on his left), together with the tournament officials, parents and educators. Photo: supplied

Sewelo Community Chess Academy, in collaboration with Yveslight Muse, held a development chess tournament on 17 September at CM Vellem Primary School. The tournament was part of the Academy’s drive to develop and spread the game of chess in our area.

The Academy’s chairperson, Mr Sewelo, said, “As Sewelo Chess Academy, we have undertaken a mission to ensure that every primary school in our area has a chess team within the next two years. This is done in collaboration with various school principals, teachers and sports coordinators, who continue to open doors of their schools for us to come and teach the learners this wonderful game of chess, which has been proven to develop memory and logical thinking, improve concentration and creativity, and lead to sound academic performance.

“It is our vision and dream as an Academy to see most of our schools playing chess regularly in the foreseeable future. We have initiated various teaching and coaching programs to see most of our children being coached and trained to become better chess players,” he said.

The tournament saw learners playing four competitive rounds of chess, with the local chess legend,  Andrew Martins, overseeing proceedings and also helping with the sponsorship of prizes. All participants played very well and learned in the process.

The competition’s organisers, Jeremiah Sewelo and Yvonne “Yveslight” Sewelo, would like to thank the principal of CM Vellem Primary for providing the venue to host the tournament. Many thanks also to the deputy principal, Thandeka Bay, the school’s chess coordinator Nompumelele Frans, and Ms Chepete from Ntaba Maria, who all stayed with us for the duration of the event, assisting with all essential logistics and motivating the learners on the day. Because of selfless educators like you, we can make a difference in our community; thank you greatly.

The next chess tournament will be held in Term 4, on 22 October, at Fingo township (venue to be confirmed) and will be opened to both primary and secondary schools.

Any local businesses and other stakeholders who would like to partner with Sewelo Chess Academy on this chess project can contact Mr Sewelo on 0638895990 or email jsewelo@gmail.com.

Chess is back home in Makhanda.