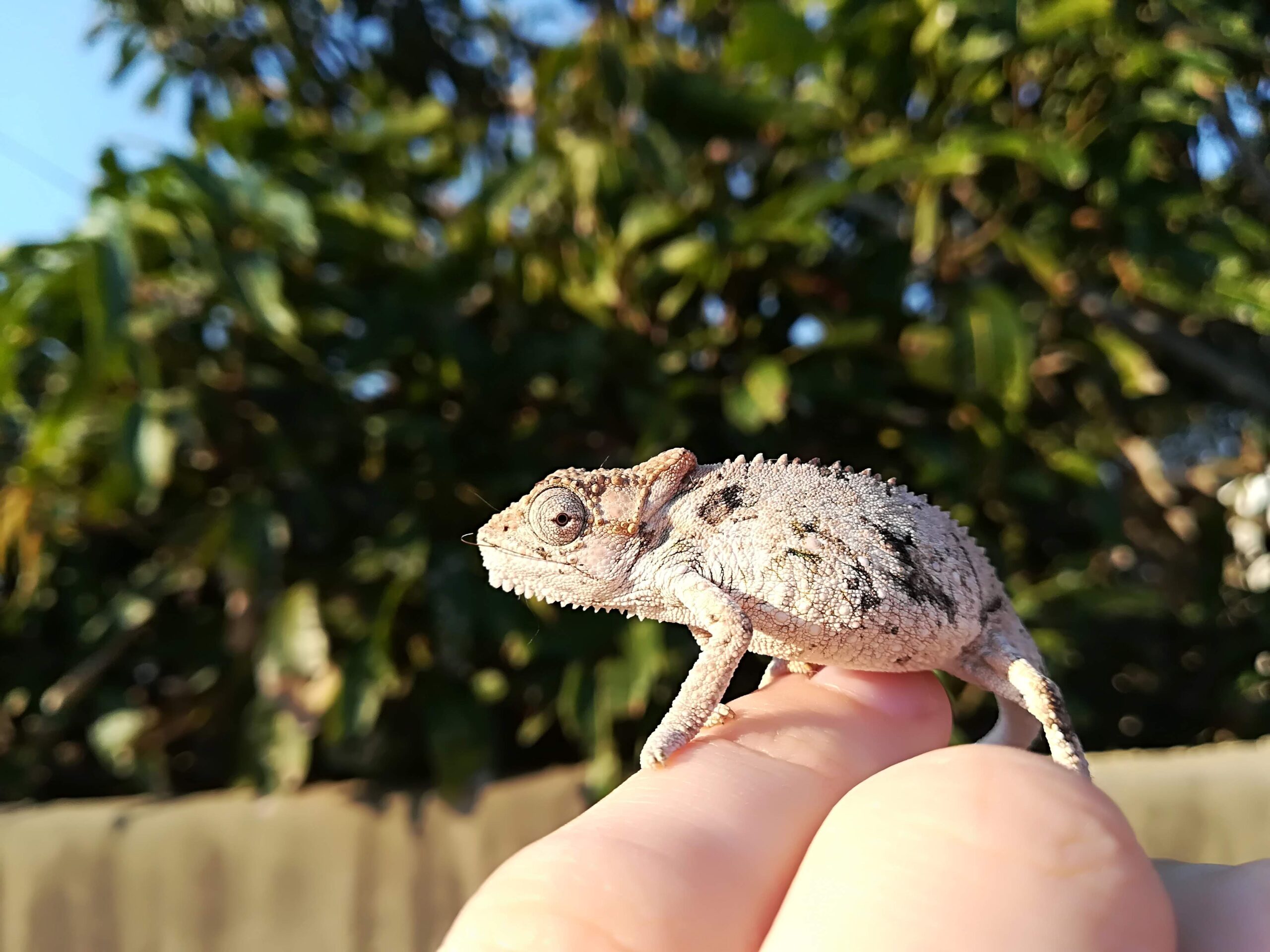 Bradypodion ventrale, the eastern Cape dwarf chameleon. It is a relatively large species of dwarf chameleon, reaching lengths of 14 cm. It lives in dense thickets and shrub, and is usually very difficult to spot because of its colouring. It adapts very well to living in suburban gardens, but domestic cats – being introduced predators – will usually kill all chameleons in the immediate area. Photo: Wikipedia

Until early 2022, there were 19 described species of chameleons in South Africa. That number has now changed, with three new species described, taking the total to 22. There are two typical chameleons (Chameleo) and 19 dwarf chameleons (Bradypodion) species.

There are few biomes across South Africa where one cannot find at least a single species of chameleon, whether in coastal forests, grasslands, savannah, montane forests, fynbos, renosterveld or Karoo scrub. And due to the transformation of wild areas and rapid urbanisation, certain species have adapted well to suburban gardens and well-planted urban areas.

So where have all the chameleons gone, and why do we see fewer and fewer of these fascinating reptiles?

There is a general trend that biodiversity worldwide is rapidly declining due to various factors: land use change, climate change, invasive species, over-exploitation, and pollution.

There is, however, good news. In many areas where suitable habitat is present – both natural and slightly disturbed – chameleons can still be found in great numbers, that is, if you know how to find them. Chameleons are notoriously difficult to spot during the day. They are the masters of camouflage, after all.

Chameleons are often more easily seen at night while sleeping on the edges of branches and leaves. When chameleons rest at night, the specialised cells in the skin, called chromatophores, become pale and are easily spotted by torchlight against vegetation.

Although not unique to chameleons, vast tracts of suitable habitat are being cleared to build houses, office parks or roadways. Even if a few chameleons survive the land-clearing, their habitat and food source is often lost, and the remaining chameleons cannot survive. When animals are restricted to a small patch of habitat, once carrying capacity is reached, this forces animals to leave and attempt to find new habitats, usually through crossing roads, which leads to road mortalities.

Well-maintained suburban gardens with manicured lawns, high concrete walls and topped with electric fences are often inhospitable for chameleons. Large open lawn spaces without corridors of interconnecting vegetation will force chameleons to venture onto the lawns, putting them at risk of predation by small mammals, birds, and domestic pets. Chameleons cannot climb up smooth concrete walls, further restricting their movements. If they manage to climb these walls, they are often met with electric fences and killed on contact.

Chameleon’s prey items – their food – are killed by people using pesticides and insecticides. A sprayed or poisoned insect can also end up killing the chameleon.

Although the removal and transportation of wild chameleons are illegal in all provinces in South Africa, the trade is big business, especially in the export market, where many wild chameleons are collected under the guise of being captive bred. Taking a chameleon you find crossing the road home to your garden or buying chameleons sold on the roadside perpetuates the problem of supply and demand. Don’t move chameleons far from where they are found, and don’t take chameleons to collectors or sanctuaries as they are seldom released.

What you can do

We can all make a difference to help these animals even by something as small as not totally clearing all-natural vegetation, planting indigenous and not supporting the illegal wildlife trade.

Create well-vegetated green corridors in your garden where chameleons can move freely without being noticed or forced to move across large open spaces.

Growing indigenous plants and shrubs, which flower naturally in season, attracts a large diversity of butterflies and other insects, which the chameleons need to thrive. If your garden is planted correctly, chameleons will eventually make their way into your garden.

Creating a compost heap or an area in the garden where you allow leaves and garden cuttings to break down naturally brings more insects into the garden.

Tyrone Ping is a herpetologist and published author who travels South Africa documenting and photographing some of the country’s most elusive reptiles. Visit his website.

This article was first published by GroundUp.co.za