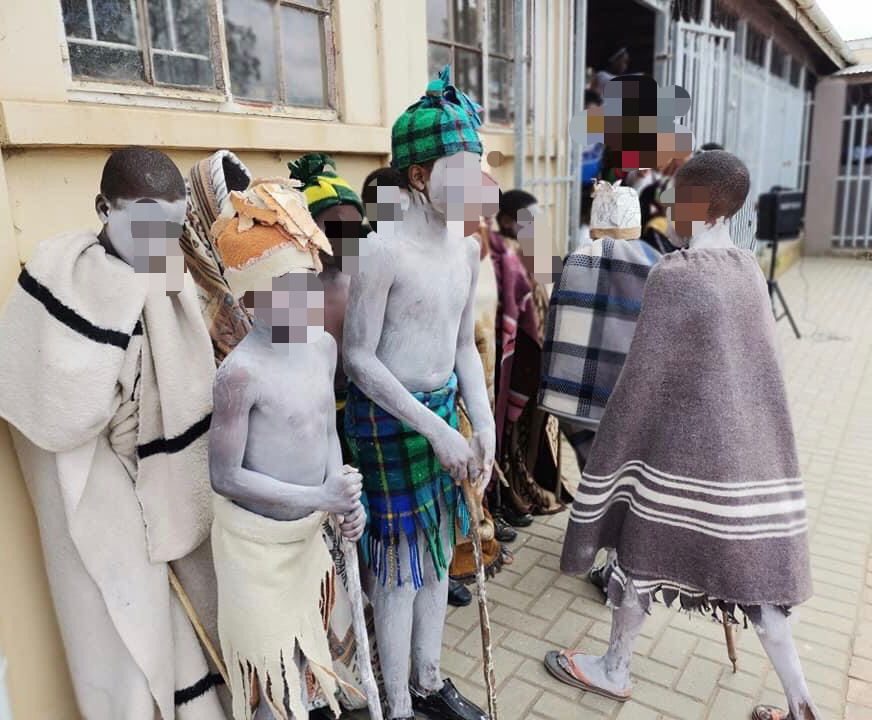 All decisions regarding the event involved staff, parents and the community. The school would never force inappropriate ideas on the children, he said.

But, when photographs of the event appeared on the Facebook page of Cape Town-based publisher, Ezitshisayo, debates on the appropriateness of children dressed in costumes used for sacred cultural rituals were sharply divided.

Some said the event was innocent and harmless and showed the children’s pride in their culture. But, others argued that it showed disrespect to a sacred Xhosa custom.

A film released in 2018, Inxeba (The Wound), caused controversy when critics argued that the film threatened to reveal the secrets of ulwaluko. These Xhosa initiation rituals are purposely shrouded in mystery. Non-initiates know few details of what goes on ‘on the mountain’, and most proponents of initiation believe that’s how it should stay.

The St Mary’s school play-act did not reveal any of these details. And the children took great care and pride in the display of their ‘costumes’.

However, some commentators were concerned that the event disrespected Xhosa culture.

“For the first time, our custom is not on media about the death of abakhwetha (initiates)!!! Children are celebrating our culture. As long they don’t disclose what we do during the process I am fine with this. Well done to the boys for embracing our culture I love this.”

“See, the little ones are proud of our custom.”

There is nothing wrong here; this is a dress that doesn’t mean anything. For example, the clothes that doctors wear are also worn by people who are not doctors and this shows how the Xhosa nation is different from other nations.

Nothing wrong here; it’s children who love culture!! One day they will also walk this way.

These are some of the criticisms posted about the school’s Heritage Day event:

“It’s broken, it’s broken, let it be fixed. If I were a Xhosa man, I would look for a civilized way to show the school principal that he is wrong, and I would exercise my rights, starting with the chiefs of the Xhosa tribe and asking for words of encouragement. In South Africa everything is seen as a joke, this is ridiculous. This is the custom of Xhosa men; it is not something that should be made as a play-act”.

“What were their parents thinking when they allowed their kids to go to school looking like this, and how do teachers allow this? There are things to play with; not this. People will never see anything wrong with this because things are no longer rebuked. We only rebuke when something results in death”.

“This is an insult to our sacred passage to manhood; are the parents of these kids aware of the importance of preserving this and only expose it when the time is right? We are undermining ourselves, even this platform is not a correct platform to expose our sacred passage”.