Waste pickers yearn to return ‘home’ to their dump site 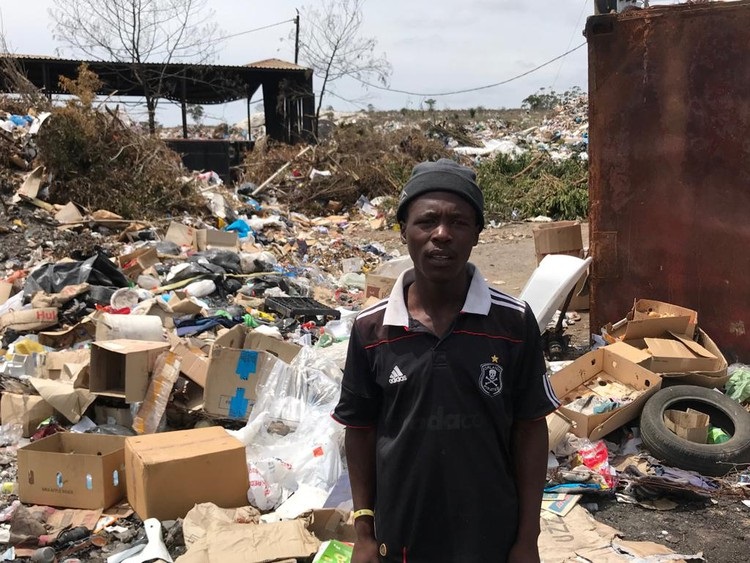 Fistoz Notyawa says the municipality does not recognise the service he provides. Photo: Mishka Wazar

The waste-pickers who were removed by the Makana Municipality from their camps at the landfill site in 2020 now travel long distances to salvage food and scrap metal. They say the municipality treats them like criminals.

In September 2015, the Grahamstown High Court ordered the municipality to bring the municipal dump site off Strowan Road into line with environmental legislation. This included refurbishing the perimeter fence, controlling access to the site, developing a waste-screening mechanism, and appointing an independent specialist to review environmental monitoring data.

When the site upgrade started, the municipality removed the occupiers and denied them access to the site. The waste pickers say the dumpsite was their home and that they had been living there for years, scavenging food and taking metal materials to the scrapyard for sale.

The waste pickers say they now have to travel long distances to get to the dump to find food and items to sell to scrap metal traders.

Mziwonke Tyala, 49, from Extension 6, said he walks to the landfill site from Extension 7 every day to collect recyclable materials. He works for eight to ten hours a day and makes around R50 and R80 on “a good day” when he gets lots of material to sell to buy food for his family.

Jacob Nela, 39, from Hoogenoeg, about 15km from the landfill site, said life was easier when they lived on the dump site. He travels more than 30km every day.

“Now we are struggling to survive in the township because we can’t travel from the township to here on rainy days. When we lived here at the dumpsite, we were not walking long distances daily. But the municipality decided to chase us away. We support our families – the municipality knows that there are no jobs here in Makhanda, and this is the only way to make money for ourselves,” he said.

Nomonde Makalo, 54, from Joza, had been living at the dump since 2012. She said she wakes up at 6 am and walks to the dump site. “I must wake up early as I will miss out if I wake up late. I come here to get the expired food as I don’t have the strength to take metals to the scrapyards. I eat the food and have never gotten sick,” said Makalo. She said waste pickers would like to be recognised for their contributions to waste management.

Professor Rinie Schenck is based at the University of the Western Cape and researches waste management. She says that informal waste pickers recycle 90% of the recyclables collected from households in South Africa. This possibly saves municipalities up to R750 million in landfill space every year.

Waste pickers face many challenges working in the informal waste economy: stigmatised by the government and the public, exposed to unhealthy working conditions and vulnerable to volatile price changes on the scrap market.

Schenck says that the only way to overcome these challenges is to integrate waste pickers into the formal waste management sector.

Municipal spokesperson Yoliswa Ramokolo and director of Public Safety and Community Services, Kelello Makgoka, didn’t respond to questions that were sent to them.

Last year Makgoka confirmed that people were prevented from living at the dumpsite and that no one had lived there since the start of the lockdown in March 2020.