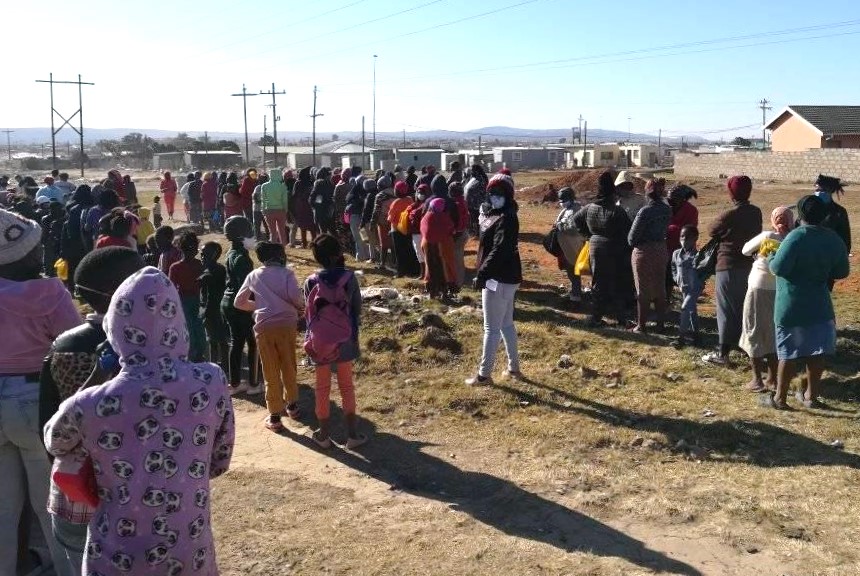 Residents queue at a food kitchen set up during the Covid-19 lockdown.

Some of the more than 20 community kitchens that started around Makhanda in the wake of the Covid-19 lockdown are still active. But kitchen organisers say donations have been much harder to come by in 2022, and many people are hungry.

Makana Residents’ Association (MRA) chairperson Sally Price-Smith confirmed that over 58 000 meals had been served since the start of this year.

“The figure is probably an understatement as some have just been added to our list,” she said. The number does not include the Grahamstown Feeding Association (GFA), which supplies meals to about 100 people five days a week.

Most kitchens were started by concerned citizens during the lockdown using their resources and, later, donations from a range of committed civil society organisations like the Makhanda Circle of Unity (CoU), MRA and Makana Revive.

The MRA is not currently handling food donations, but they are donating gas, mainly funded by Beer properties with residual funds from the Circle of Unity. Residual funds are also used for providing equipment and training activities.

The sense of urgency waned when lockdown restrictions were lifted.

But, the need remains. An informal survey conducted by the Grahamstown Feeding Association (GFA) in 2020 collected the names of 9 000 Makhanda households that are food insecure.

Price-Smith said some kitchens had become more self-sufficient by growing their own gardens, but many are still in great need of public donations.

While many churches and civil society organisations, like Food4Futures (F4F) and the GFA, continue their efforts, they are all private sector initiatives and compete for a small pool of donors.

In a recent newsletter, F4F coordinator Mary Birt appealed to the community for “good ideas regarding fundraising”.

“We have found that the current need for food is multiplying again. It is almost as intense as it was at the beginning of the lockdown. Joblessness coupled with the price of food and transport is hitting our compromised community very hard,” she said.

F4F has been donating to specific food kitchens, like the one run by the Faxa family, for some time, Birt said. However, F4F assist individual families and cannot help any more kitchens as they have limited funds.

Meanwhile, Makhanda Circle of Unity (CoU) projects manager Sakhe Ntlabezo has been working closely with the MRA to raise funds for community kitchens.

Salmon said that the food security cluster has been working to create dialogue around the issue and engage the relevant stakeholders.

Help has come from the Department of Social Development, but they do not have the support of donations that flowed during the height of the pandemic from various foundations and organisations.

Salmon said there was a strong need for a locally-based organisation to centrally manage donations and take responsibility for the legal responsibilities when dealing with food safety. This organisation would also need financial assistance from the government.

Fifteen strategies for local food security were prioritised in a poll conducted by the CoU in 2021. However, none of these had been successfully implemented yet, Salmon said.

Salmon said there was no centralised place where donations could be made. This has been under discussion for a while but has not materialised yet. If you can help, here are contacts for some of the individual community kitchens: