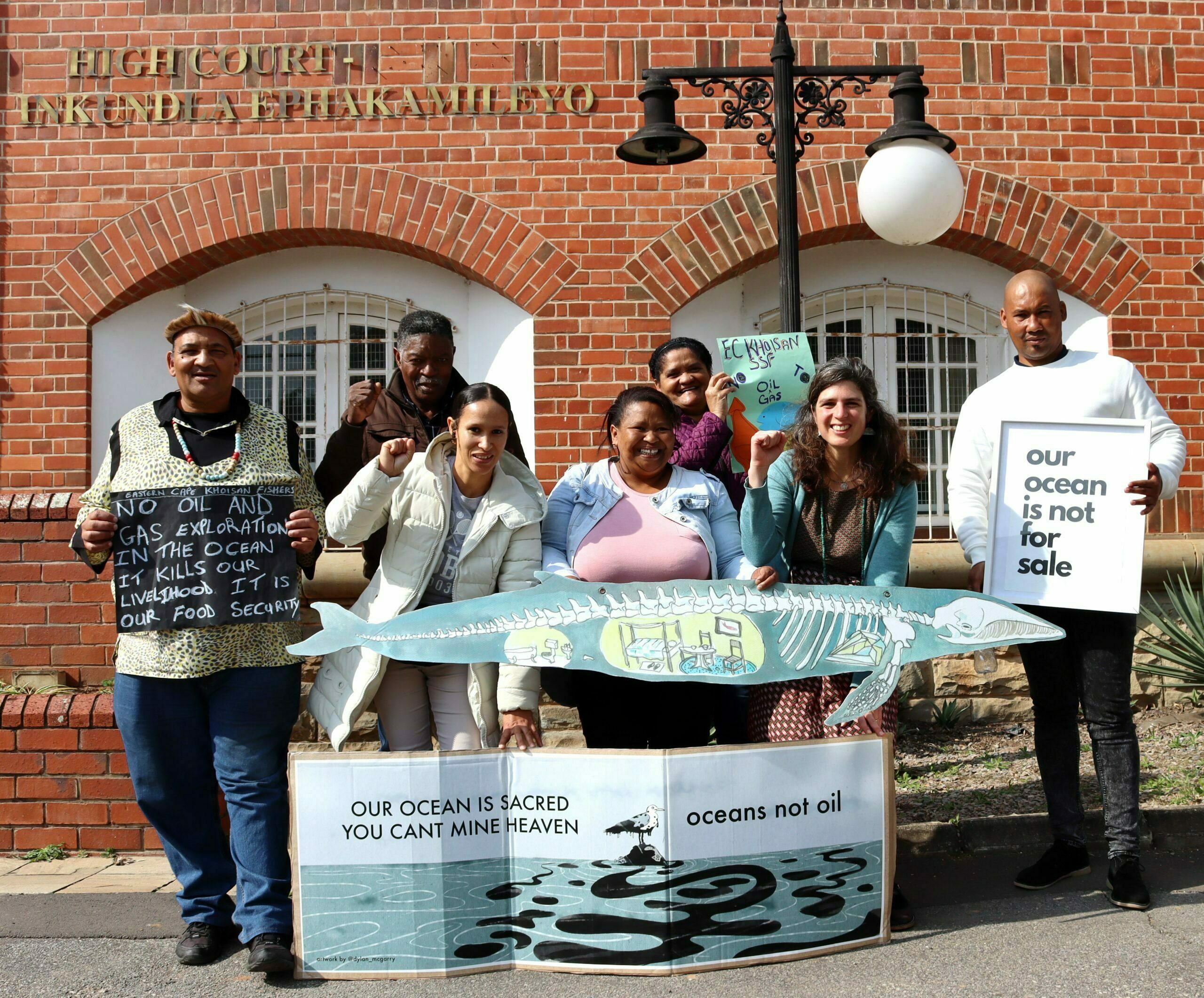 Some of the applicants, which included Sustaining the Wild Coast, local community members and Greenpeace, celebrate the outcome of the case outside the Eastern Cape High Court in Makhanda. Photo: Toto Tsarneba

By TANIA BROUGHTON and TOTO TSARNEBA

The Eastern Cape High Court has ruled that the exploration rights granted by the Minister of Mineral Resources and Energy Affairs to Impact Africa and Shell were unlawful – putting an end to any seismic survey in the ocean off the Wild Coast.

The rights, extended twice between 2014 and 2021, included permission for what became a controversial seismic survey, which was stopped by an interdict granted in December last year at the behest of Wild Coast communities and civil society organisations who complained of the damaging impact of the survey and that they had not been adequately consulted.

The applicants then proceeded to court with “Part B” of their application – to review and set aside the granting of the rights in the first place. Because of its importance and the novel issues raised, three judges heard the matter: Judge President Selby Mbenenge, Judge Zamani Nhlangulela and Judge Thandi Norman.

Judge Mbenenge, who penned the ruling handed down on Thursday, said: “Stripped of verbiage, the principal question is whether the grant of an exploration right for oil and gas, which has culminated in the need to conduct a seismic survey along the South East coast of South Africa, is lawful.”

He noted that the Eastern Cape coast is used by those who enjoy watersports and was “steeped in customary rituals” of communities who subsist by fishing. It is also a haven for marine and bird life.

The seismic survey, the judge said, involved the discharge of pressurised air from airguns in generating sound waves directed down to the seabed.

He said it was common cause that Impact Africa and Shell had not secured environmental authorisation to survey terms of the National Environmental Management Act.

The applicants, he said, argued that such authorisation is necessary for exploration activities regulated by the Mineral and Petroleum Resources Development Act (MPRDA).

They also argued that the consultation process leading up to the award of the exploration right was flawed and that key stakeholders, such as those who hold customary law rights, had not been consulted at all.

No heed had been paid to potential harm to marine and bird life and communities’ spiritual and cultural rights.

The applicants also submitted that the area deserved a “particularly high level of protection”, given its ecological value and the presence of critically endangered, threatened, protected species.

Shell and Impact Africa argued that there was no need to secure an environmental authorisation in addition to the environmental management programme approved under the MPRDA.

They also said that seismic surveys are “routine”, and there was no evidence that they harm marine and bird life.

Judge Mbenenge said the Minister opposed the review “associating himself with Impact Africa and Shell”.

On whether there was “meaningful consultation” with interested and affected parties, the judge said this was not a mere “ticking of a checklist” but required engaging in a genuine, substantive two-way process aimed at achieving consensus, as far as possible.

He said the prescripts of the MPRDA and its regulations were subject to the Constitution and the Promotion to Access of Justice Act.

He said in this case, the aims of the relevant regulations – which require that all interested and affected parties be notified of the application for exploration rights – had been “thwarted”.

One issue, he said, was that the notice had not been widely circulated in a language that many of those affected would have understood.

The judge said the consultation process was also “woefully lacking” because project information had only been available on a website, meaning local rural communities had no access to it.

He, therefore, ruled the consultation process to be “procedurally unfair”, and the decision to grant the exploration right and its subsequent renewals “falls to be reviewed on this ground alone”.

Judge Mbenenge said that while it only took a “single bad reason” to render the entire decision reviewable, he also ruled that the failure of the minister to take into account the impact on communities, their spiritual and cultural rights, harm to marine and bird life, and climate change was also fatal to the decision to grant the right.

“It is demonstrably clear that the decisions (to award and renew the rights) were not preceded by a fair procedure, that the decision-maker failed to take relevant considerations into account and comply with the relevant legal prescripts,” he said, granting the review which, he said, would result in Shell being prohibited from conducting the seismic survey.

The applicants in the case were Sustaining the Wild Coast and eight other individuals and environmental activist groups, including Greenpeace.

Speaking after the judgement, Taryn Pereira, who works for the Coastal Justice Network and is a research associate at Rhodes University’s Environmental Learning Research Centre, said Shell, one of the biggest fuel companies in the world, had tried to dodge our country’s Constitution and laws.

“They didn’t consult affected communities and do a proper environmental assessment. Coastal communities have told Shell that they may not do the mining without their consent or consulting. Shell didn’t follow the proper steps of a full assessment. The decision can’t solely rest on the economic benefit of how much the country might get from oil and gas,” she said.

“If local people lose their livelihood of being able to fish and live safely along the coastline, you can’t even put a price on that,” she said.

Pereira said the judgment was very significant. “I hope people around the world get inspired by this group of fishing community from the Eastern Cape that has managed to stop a big fish like Shell,” she said.

Ntsindiso Noncavu, one of the seven applicants, said he felt “alive”. “I feel like I have done justice for the people that live along the coastline.”

A version of this story was first published by GroundUp.org.za