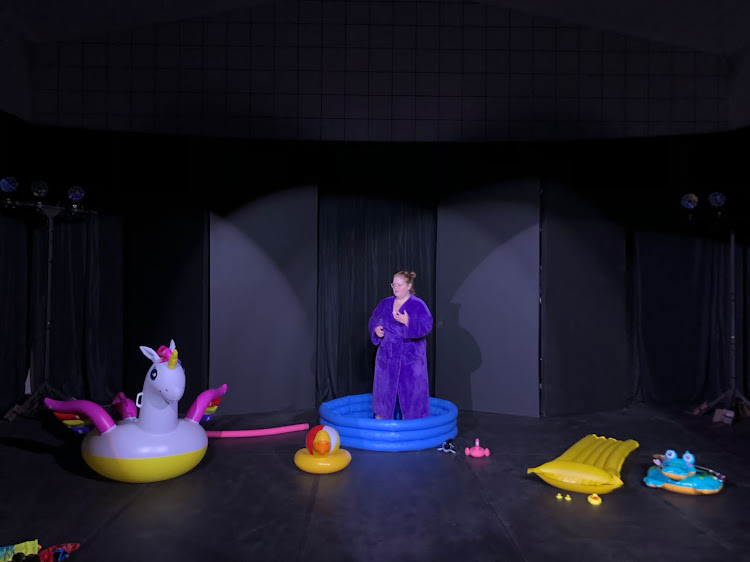 Tas Sherman as Vic Woode in 'My Weight and Why I Carry It'. Photo: supplied

In celebration of Women’s Day, the Rhodes University Drama Department presented Jikijela and My Weight and Why I Carry It, two short plays that explore issues affecting women. Both writers are women and Drama Master’s candidates at Rhodes University. They won the Standard Bank Silver Ovation Award at the 2022 National Arts Festival.

The audience clapped and cheered as Vic untied her robe, revealing a bikini. She said, “I’m 23 years old, and this is my first time wearing a bikini in public.” Using the character Vic Woode, Tasmin Sherman, the writer and performer of My Weight and Why I Choose to Carry It, shared the struggles faced by plus-size women in society.

Directed by Ingrid Wylde, the play highlights many themes around body image, such as body shaming, eating disorders, the stigmatization of plus-size women, and mental health. Influenced by her experiences and those of her loved ones, Tasmin says the purpose of her play is to remind plus-sized women that their body is their own and that losing weight won’t necessarily make them happier.

Jikijela is written and directed by Khanya Ngcuka. The show is brought to life by three fantastic performers, Christell Futshane, Sanele Philip, and Suné Jurgens. Following the lives of three friends from Section 9 township, Jikijela explores the issues faced by women in the LGBTQIA+ community. Corrective rape, murder, homophobia, and justice system failures are present themes in the play. “I have a passion for social justice, and as an artist, I believe whatever work I create should address an injustice,” says Ngcuka.

Living in a country dubbed “the rape capital of the world”, where women remain unprotected by the justice system, is a challenge and a reality for all South African women. Calls for creating laws that target corrective rape have been made since 2008, yet in 2022, such laws still do not exist.

Presenting these shows during Women’s Month is very significant because they serve as a reminder that while women are being celebrated, their struggles should also be acknowledged.

Artists like Ngcuka and Sherman have taken it upon themselves to ignite conversations about these struggles.