“We are hurt, hopeless and don’t know what to do” 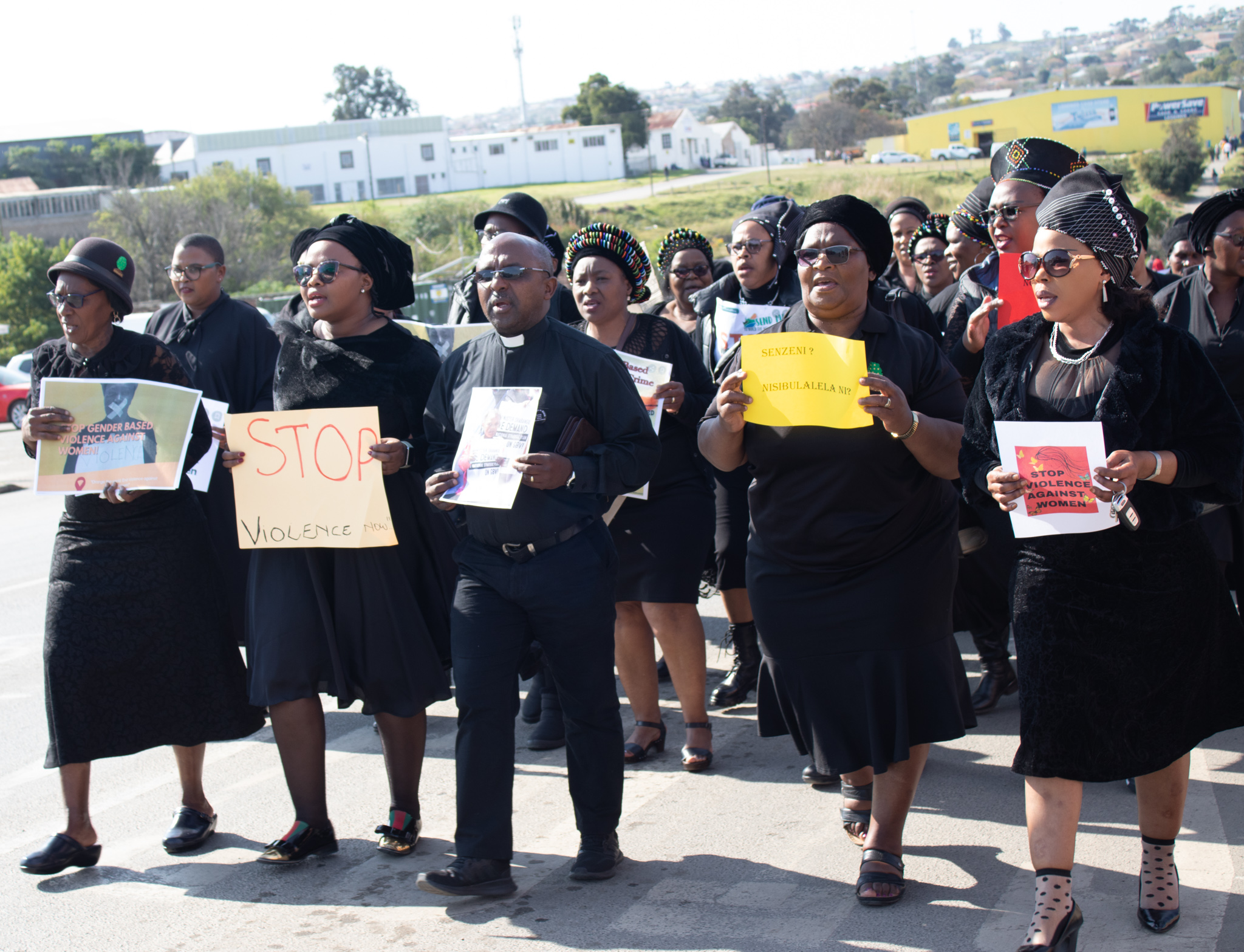 The Women’s Manyano is an organization within the Methodist Church of Southern Africa (MCSA). Alternatively known as ooMama Bomthandazo, which loosely translates to ‘women of prayer’, these matriarchs recently marched on the streets of Makhanda to kick-start Women’s Month, express solidarity and take an active stand against gender-based violence (GBV).

To portray their anger and disgust, the Grahamstown Circuit Women’s Manyano used last Thursday (a day set aside by women of the MCSA in dedication to prayer) to join hands in a silent march from Border Alliance Taxi Rank to the police station.

Upon their arrival, Colonel Monray Nel – who received and signed the petition handed over to the Grahamstown SAPS – heeded their cry for help.

Chanting in one voice, these dignified women unified and marched to Soccer City at Fingo Location, where the rest of the event unfolded.

In her speech to Col Nel, Zukiswa Mhlwatika emphasized that the crowd gathered before him was hurt, hopeless, and did not know what to do. This was why they took it upon themselves as the Women’s Manyano to personally hand over the petition to the station.

“These women are abused; physically, sexually, and emotionally. We, as women, are dealing with heartache and disappointment regarding law enforcement and the number of GBV cases pending at the SAPS”. She said there were many unresolved cases which demanded the visibility of the police. In one incident, she recalled phoning the police, urgently seeking their assistance, but was attended to by Hi-Tec Security.

In response, Col Nel said that the police were doing their best to combat GBV and other problematic issues such as drug and alcohol abuse. He urged citizens to be alert and assist the police by reporting illegal activities. “We live in a violent society; unfortunately, if we don’t all stand together, we will never win the fight.” The colonel also advised the women, alongside church members, to raise their grievances at the court as it is the institution that gives the final verdict.

Executive Mayor Yandiswa Vara was present on the day. “I have decided to be a part of this event because I am a woman, a mother, a sister, a colleague, and a friend to other women.”

“I am also against child and women abuse and drug abuse – everything contained in that petition, I am fully behind and unapologetically so.”

The executive committee of the MCSA said the church was not immune to the community’s social ills.

Apart from GBV, Lungi Makubalo added that issues such as the operation of taverns and overall safety in the location were of concern. “During the lockdown, we had peace and harmony in Makhanda; tavern owners had specific opening and closing times. Remember, they promised to consider the neighbourhood when applying for work permits. However, they’re not honouring their promises”.

She said there had been instances where Hi-Tec had to intervene in attempted break-ins. “We are not safe in our society, in our own houses, and we don’t hear any response from the police. That is why the Women’s Manyano decided it was enough and the executive organized this march”.

The executive will organize similar events in future involving all relevant stakeholders, to raise awareness. Furthermore, they promised to march to the court and demand protection as they refused to remain silent. “We cannot be quiet when we have a thorn of GBV in our flesh.” one woman said.

Previous ArticleLocal whizz-kids shine at regional science expo
Next Article Working with plans A, B, C, and D