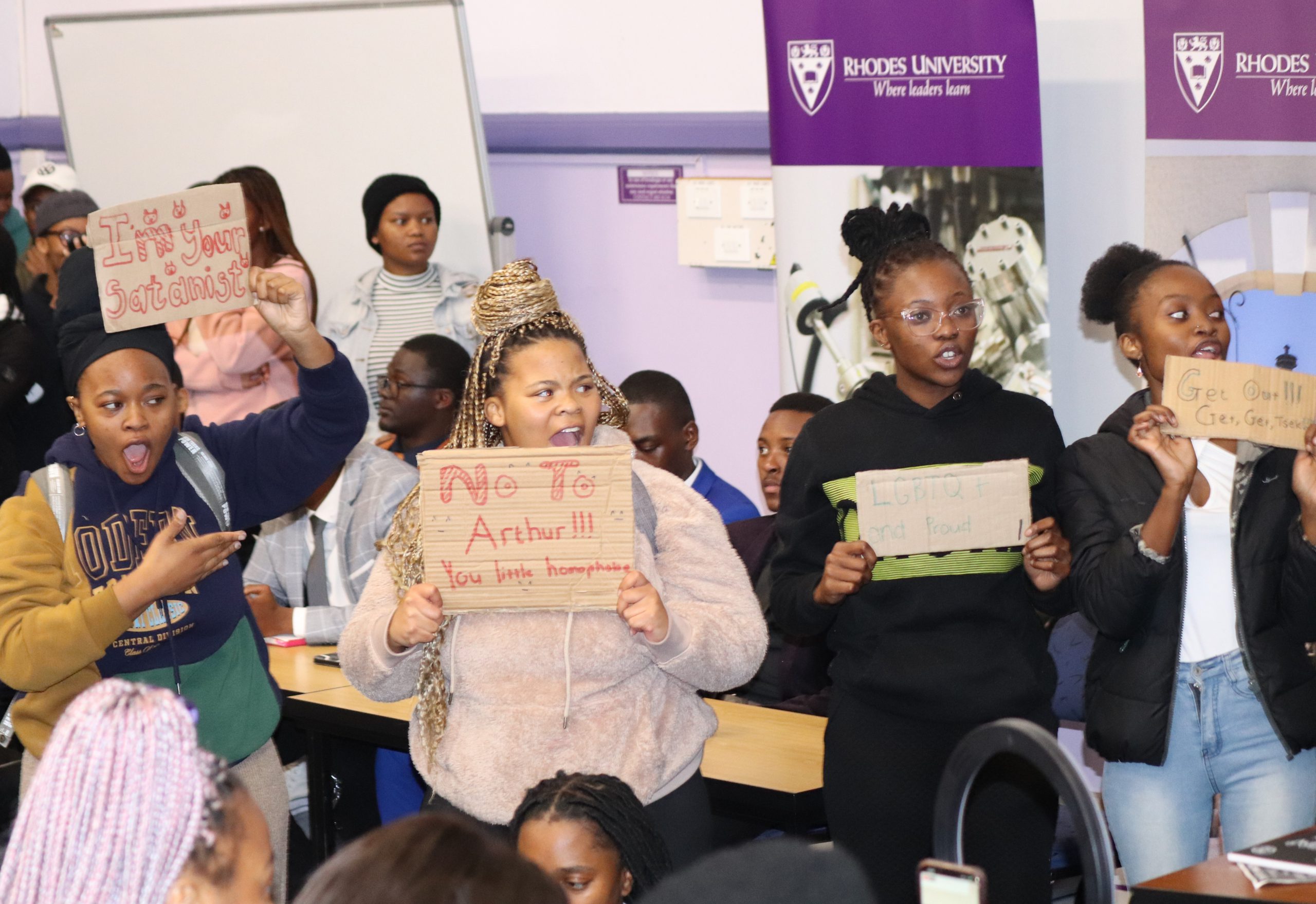 Protestors disrupted a Rhodes SRC election’ grazzle’ at a packed General Lecture Theatre on Monday, 2 August, as presidential candidate Arthur Vamva got up to deliver his speech.

Protestors objected strenuously to homophobic and transphobic remarks on Vamva’s Facebook page and asked the SRC election organisers why he had been allowed to participate.

Vamva remained unshaken and delivered his speech despite the turmoil and unease in the hall.

Students called on the Independent Electoral Board (IEB) and the SRC’s Student Defence Council (SDC) to lay charges against the candidate. The IEB runs the elections, and the SDC is an elected body that falls under the SRC as a substructure for disciplinary hearings and student-related offences.

Messages of support for the LGBTQIA+ community and objections to Vamva’s candidacy have flooded the UCKAR Facebook page during the SRC election season.

“Not only did he drag the university’s name into disrepute, but he made multiple blatant homophobic, racist, transphobic and misogynistic utterances,” student Alejandro Rubenstein commented on the UCKAR Facebook page.

“The candidate’s actions have been described as disgusting, and he doesn’t even attempt to hide them. Imagine it’s 2022, and you’re in a liberal institution like Rhodes, harbouring these feelings. Your parents didn’t raise YOU right. You’re not a leader in any respect. This is scary that this is how you feel about your fellow LGBTQIA+ students,” Alejandro Rubenstein wrote.

Many students, including Alejandro, questioned the university’s silence on the matter, especially in light of its transparency, transformation, and inclusivity policies.

“I hope the university also takes you [Vamva] to task because this is unacceptable. I’m calling on SASCO to revoke your membership and rescind their support for you unless they feel the same way. You are not someone who should be entrusted with any leadership positions, let alone president. Never!” Rubenstein wrote.

MA student Dagan Naeser said he had been “disappointed” by several university structures, including the SRC. He said when he arrived at Rhodes in 2018, the first meeting he attended at his residence was about activism, transformation, and inclusivity.

Naeser said he had never experienced such overt homophobia at Rhodes. But, he said he was proud that Rhodes students were proudly condemning violent speech that could lead to harm to the LGBTQIA+ community.

He said he was disappointed with the IEB. A presidential candidate should not be allowed to say such demeaning words. “That there are no consequences said a lot about the institution,” Naeser said.

“How many reses are there at Rhodes? And not a single activism and transformation representative on the res house committees had a thing to say?”

Naeser said some of these res activism and transformation representatives were running for the SRC but were “dead silent” about the matter.

“Rhodes has these documents that talk about transformation, but nothing is done when push comes to shove. It’s fairly disappointing, and I can’t believe that I am protesting about this in 2022,” he said.

A student petition with over 500 signatures condemning the candidate, and calling on the IEB, SRC, and Rhodes to take action, is being circulated, according to Rubenstein.

“The inaction of the IEB, the SRC’s silence, and Rhodes University’s refusal to disqualify this misogynistic, transphobic and homophobic candidate disgust me. Those running for SRC should refuse to attend any ‘grazzle’ that includes him,” Rubenstein said. “This man and his Stone Age beliefs have no place on campus.”

In an interview with Grocott’s Mail on Thursday, Vamva said he had not been afforded the opportunity to present his candidacy. “Some had placards on my face and covered my written speech with them. Some issued threats by asking how I would survive once I left the grazzle. I said the Campus Protection Unit would protect me.”

“I should not be bashed or called ‘backward’ because I come from a conservative background – that is discrimination in itself. Nobody should create hate against any people,” he said.

“We are in a democracy. We have different cultural norms and religions, so we will differ. We should be allowed to live according to our own norms.”

A 19 July, Vamva’s Facebook page reposted a post criticising LGBTQIA+ people and added his own comment: “Satanism at its best. I don’t care what you say. There is a domination of spiritual darkness implicated here- makuthandazwe, this is not normal!!”

Asked if he thought the words constituted hate speech under the Equality and Prevention of Discrimination Act (see sidebar), Vamva said he did not. He distinguished Satanistic practices and labelling individual people as Satanists, which he denied doing in his post.

He said as an SRC candidate, he shouldn’t be asked what he would do for the LGBTQI+ community on campus. All students are part of an equal community. “There is no queer Rhodes; there is no Christian Rhodes, transexual, feminist or patriarchal university. There is only one Rhodes University.”

He also said he did not think people were biologically influenced to become homosexual.

Grocott’s will provide a fuller account of the interview soon.

BRIANNA CASSANDRA PURDON wrote a response to Monday’s events on the UCKAR Facebook page. She granted Grocott’s Mail permission to republish her perspective.

I don’t think people are … realising the gravity of the queerphobic candidate’s actions. I’ve seen cases of people trying to claim things like last night’s protests went too far. And so, I want to put things into perspective.

Similarly, the queer suicide rate is sky-high. Again, this kind of hatred has a significant impact on that. I know too many queer people, myself included, who have come so close to that edge. I’m very grateful that they’re all still here, but many other queer people are not still here because of people like the candidate.

Furthermore, a significant number of queer people’s mental health is in a critical state. Almost every queer person I know suffers from depression, an anxiety disorder, or another mental health struggle. Of course, many factors affect our mental health, but exposure to such constant hatred is a significant contributor.

I’m a queer, trans woman. I’ve known so many people like the candidate in my time. I’ve been called an abomination many times, told I’m a disgusting and wrong individual that does not deserve to exist, and received death threats, all from people spreading the kind of hatred the candidate does. I’ve seen people who admit to wanting to kill people like me. Some admitted that they would genocide us if they could. Do you know what this kind of hatred can grow into? A very deadly variety. A very fascist type. Hell, even those of us speaking out against him publicly are risking our safety here.

What is hate speech?

Hate speech may be defined as an expression that goes beyond mere insults or offensive language and may infringe the dignity of specific persons or groups.

The increase in social media usage in the country has brought about the challenge of regulating hateful and harmful expression. Social media’s anonymity and broadcasting ability has created a platform for people who wish to propagate hate speech. There is an urgent need for collective action between national governments, providers of global social media platforms and the general public to end the scourge of hate speech propagated on social media.

In South Africa, common comments or words historically used during colonial and apartheid periods such as “baboon”, “monkey”, “aap”, “hotnot”, and “coolie” to describe people in a demeaning way have been declared by the courts to be hate speech. Such speech has no place in a constitutional democracy founded on the values of dignity and equality.

Hate speech:
• impacts negatively on victims in terms of their self-worth
• causes significant hurt, harm, pain, distress, sorrow and humiliation
• is degrading and dehumanising
• has the effect of depriving victims of their fundamental rights
• in particular; it impugns the right to human dignity and equality

SECTION 16 OF THE CONSTITUTION
Provides that everyone has the right to freedom of expression, which includes freedom of the press and other media; freedom to receive or impart information or ideas; freedom of artistic creativity; and academic freedom and freedom of scientific research. However, this freedom is limited and does not extend to propaganda for war or incitement of imminent violence or advocacy of hatred based on race, ethnicity, gender or religion, and that constitutes incitement to cause harm.

THE PROMOTION OF EQUALITY AND PREVENTION OF UNFAIR DISCRIMINATION ACT, 4 OF 2000 (PEPUDA OR EQUALITY ACT) is also meant to prevent and prohibit hate speech. Section 10 of the
Act provides that no person may publish, propagate, advocate or communicate words based on one or more of the prohibited grounds against any person that could reasonably be construed to demonstrate a clear intention to be hurtful, be harmful or incite harm; and/or to promote or propagate hatred. Publication of such expression is allowed if the expression is genuinely for artistic creativity, academic and scientific inquiry, fair and accurate reporting or such publication of any information, advertisement or notice is in the public interest.

Previous ArticleeNkanini is electrified after five years of protest
Next Article No transport, no school for learners stuck on farms