The long lineage of Madiba’s humanism 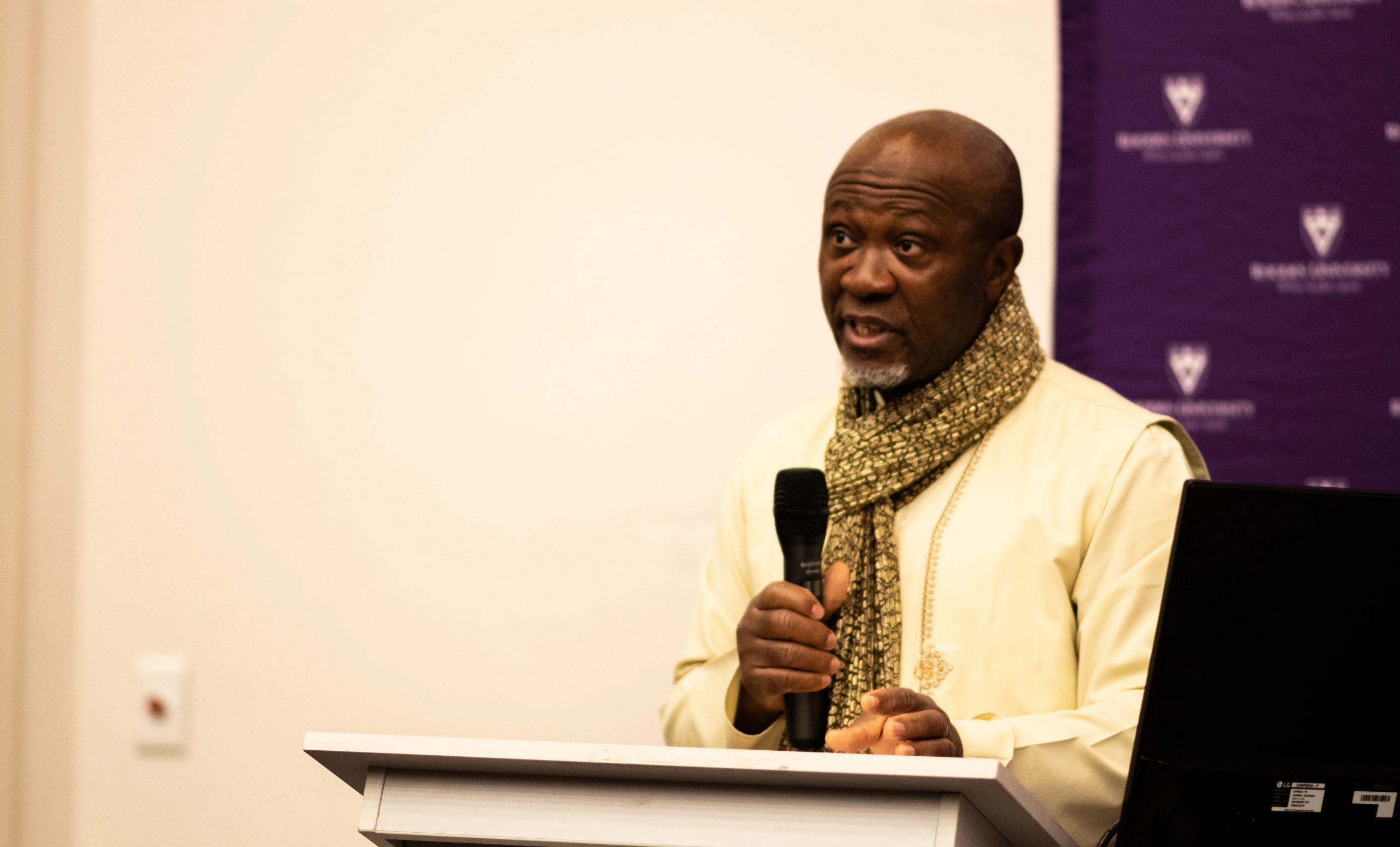 The late Nelson Mandela is celebrated as a leading figure of the liberation struggle against Apartheid, renowned for a morality always turned towards empathy, forgiveness, and a commitment to the freedom and equality of all.

At this year’s Nelson Mandela Public Lecture hosted by Rhodes University’s Department of Politics and International Relations, Prof Siba Grovogui grounded Madiba’s legacy in the historical and political thought of the African diaspora. Though the historical figure is often seen as exceptional, and indeed he was, the African humanism running through his philosophy is not alien to Africa, its descendants of the diaspora, and the many struggles for liberation that Africans have faced.

A professor of African Political Thought at Cornell University, Prof Grovogui focused on an excerpt from Mandela’s 20 April 1964 speech at the Rivonia Trial, which exemplifies this political humanist tradition:

“During my lifetime, I have dedicated myself to this struggle of the African people. I have fought against white domination, and I have fought against black domination. I have cherished the ideal of a democratic and free society where all persons live together in harmony and with equal opportunities. It is an ideal which I hope to live for and to achieve. But if needs be, it is an ideal for which I am prepared to die.”

Broadly speaking, humanism is a philosophy focused on using reason and empathy to ground a morality aimed at the respect and equality of all persons. Its values speak to the heart of democratic liberal ideals and are most often associated with Western Enlightenment. But Professor Grovogui showed how humanism was the basis for many liberation movements, from the struggle against Atlantic slavery to decolonisation and anti-Apartheid fronts.

Tata Mandela has been painted by many as a legend. The first discussant, Allan Grey Orbis Foundation Candidate Fellow and honours student in the Politics Department, Ndaundika Shefeni, said recognising African leaders is important because it challenges the erasure of black people from history and inspires people in the present.

Professor Grovogui explained how the representation of historical figures as ‘legendary’ could be a disservice. “Legends and heroism are ways in which black people are stripped of political thought,” he said, “Obsession with heroes is a form of abjection.” To speak of legends is to make something abject – to make it seem irregular or out of the norm. “We say things are exceptional when we don’t want to do it,” he said, “But it is accessible to everyone. Empathy, compassion, and commitment are not new to the struggle for liberation in Africa and its diaspora”, he said.

Following the slave revolt in Haiti, the new emperor Jean-Jacques Dessalines expressed a commitment to humanism within the new Constitution. Despite the ethnic diversity on the island, he defined all citizens of Haiti as ‘black’, presenting a purely political idea of race which, according to Professor Grovogui, pointed to an obligation to respect all people equally.

First-year Master’s candidate in Politics and the second discussant, Dagan Naeser, noted how the youth today are cynical about Mandela’s legacy. But Haiti is one of many examples which show how Mandela’s values, rather than merely being an import of the West or an act of ‘selling out, find their intellectual home in an African political tradition spanning centuries.

Professor Grovogui showed how this tradition improves upon Western humanism and its institutional cousin, liberalism, which has historically been incomplete. European Enlightenment only extended respect for the equal humanity of a few, excluding women and people of colour. “The problem of the modern world and liberalism is partial public sympathy,” he said, meaning our public institutions. However, promoting equality in their ideals does not recognise everyone as equal in practice.

He said liberal democratic ideals are good, but what is needed is also justice and equal opportunity, goals which go unfulfilled in democracies the world over. This has led to distrust in institutions and disillusionment with democratic ideals, leaving room for fascism in its wake. “Black people, [or at least one strand of black political thought], fought against this partial public sympathy,” he said, “To save itself, the world has to recover some of these ideas.”

Dr Darlene Miller from UNISA’s Thabo Mbeki African School of Public and International Affairs and Master’s student Megan Mannion drew attention to the lack of women’s representation during discussions of historical ‘legends’. Dr Miller alluded to how many political legends had controversial dealings with women and how these individuals often ‘towered over the rest, leading to a disconnect between the leader and the people.’

She asked whether matriarchal leadership might be better disposed to disrupt the current leadership crisis in the world: “We have different ways of being extraordinary. It is based on a circular leadership form, meaning we do not loom large but are instead immersed. And so, [though extraordinary too], we do not lose our ordinariness.” They acknowledged that humanist qualities of empathy and compassion are not lacking in African political thought. However, they have also been discouraged from traditional masculinity. They said to de-limit and expand public sympathies for everyone, it is precisely these historically feminine qualities – embodied by Mandela – that might be able to pave the way forward.