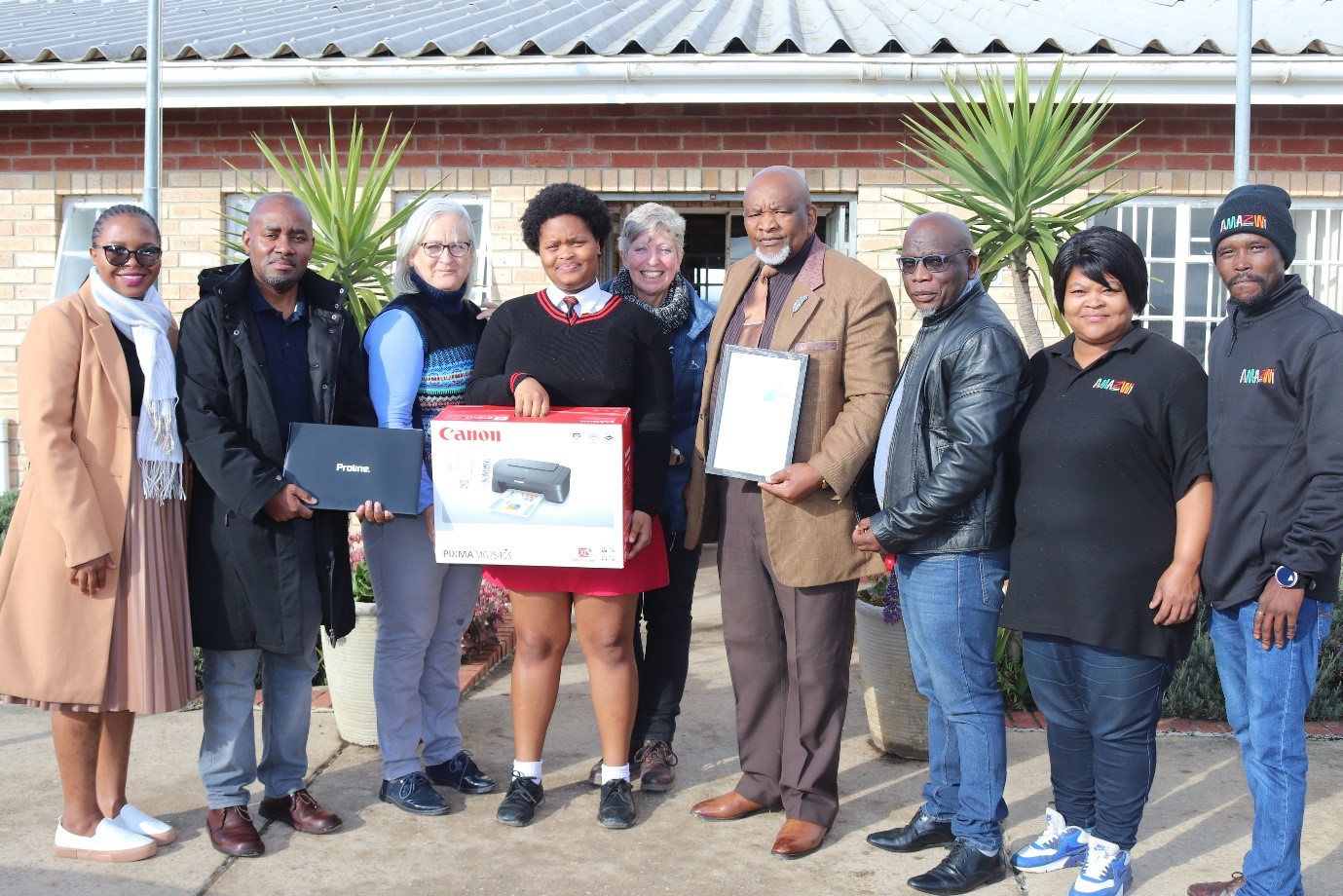 Siyamthanda Nobuntu receives her laptop and printer from the Department of Sports, Recreation, Arts and Culture. Photo: Ovayo Milisa Novukela

A nervous Nobuntu said she kept on believing what her teacher taught her and coached her.

Still, when she heard her name in second place, she couldn’t believe it. “I was so shocked and surprised when I heard my name because I was up against some of the biggest schools in the province,” she said.

Ward 2 Councillor and Makana corporate services chairperson Ramie Xonxa described Nobuntu’s achievement as “extraordinary and an example to the community”.

“Nobuntu has represented Ntsika and Makhanda with honour and grace.”

The Department of Sports, Recreation, Arts, and Culture (DSRAC) and the Amazwi Literature Museum went to Ntsika High School to present the coveted prizes.

2022 marks a century since the death of Reverend John Knox Bokwe. To commemorate his life, Eastern Cape learners were challenged to an essay competition hosted by DSRAC. These essays, titled ‘The Power of Museums: commemorating our legends with particular reference to John Knox Bokwe’, required multiple hours of research into our heritage and culture.

Xonxa said it was essential to honour individuals like Bokwe, who shaped the province. “When I was a pupil, John Bokwe’s grandson was my principal. He was so proud and excited when he talked about how Bokwe and John Tango Jabavu shaped journalism for black people,” he said.

Ntsika High School principal Madeleine Schoeman said, “I am so proud of what Siyamthanda has achieved for the school but also herself.”

“These computers will massively benefit the school,” she said.

She said the school’s stellar academic performance was a result of the dedication of both the learners and the educators, “The educators work very hard to give the best for the learners and provide them the best opportunities available for them to explore and create endless chances.”

Nobuntu and her educator will represent the Eastern Cape at a national event in Cape Town in September, sponsored by DSRAC.