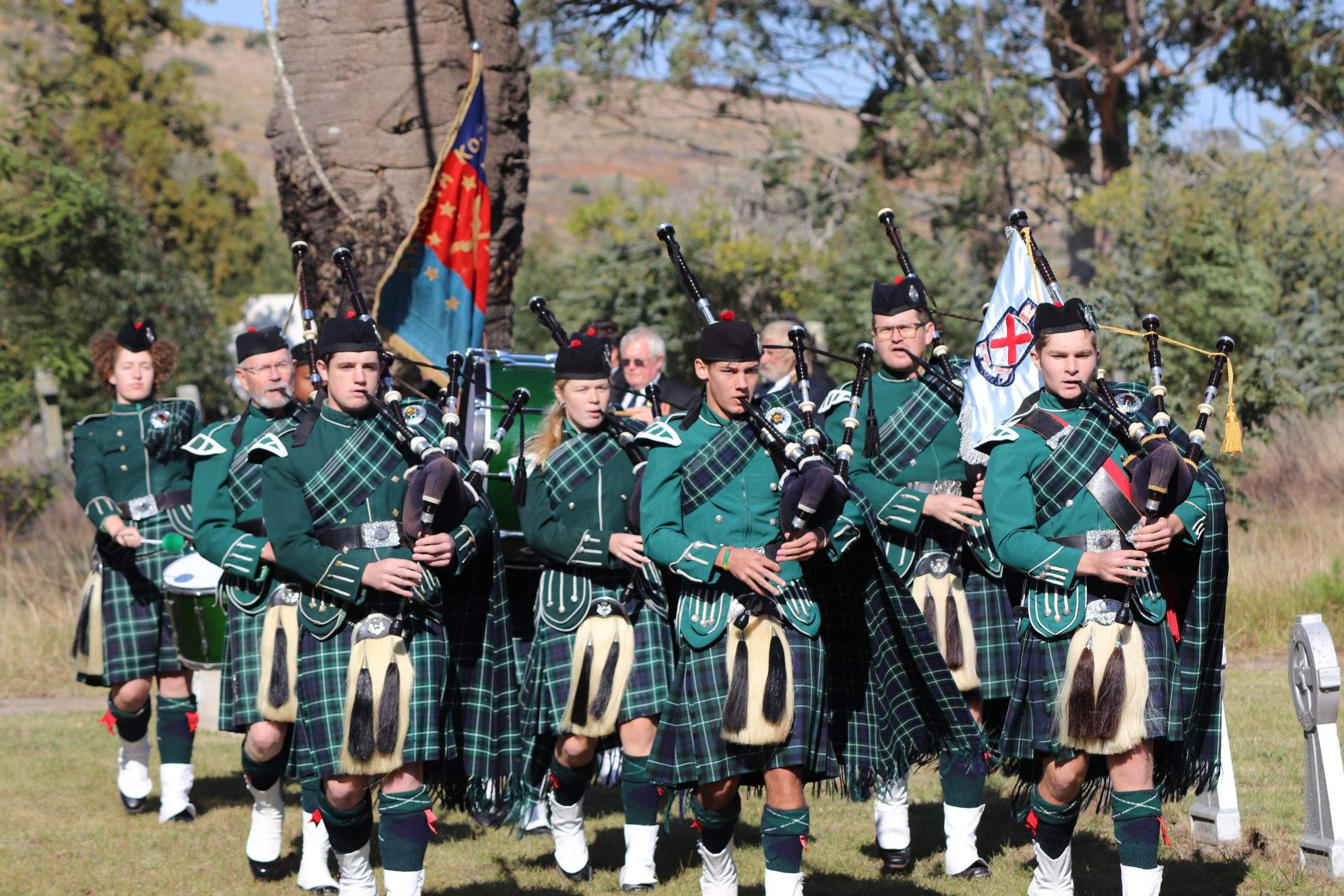 We remember not to glorify war, but rather to remember the pain and suffering war brings to, so many as we as a human race fail to learn to accept and embrace our differences”

Andrew Kirk, Old Bill, Makanakop Shellhole thanked all those present at the Delville Wood Memorial Parade on the morning of 17 July 2022 at the Waainek Military Cemetery.

Kirk said the Battle of the Delville Wood was one of the best-known of World War One. The courageous sacrifice of South African forces during the war can never be forgotten in our historical records, he said. Over 3 000 soldiers and support personnel of all races entered the French wood; only 750 survived.

“Today, the fallen heroes have been long forgotten. South Africa has an enormous heritage that we should embrace. It’s a history that binds us together as one nation. If we are to write off one thing that holds us together, how should we know where we come from as a nation?” Kirk asked.

Kirk said the Waainek Military Cemetery was a fitting place to hold the memorial as the graveyard is faced with many challenges, including vandalism.

The Blokes of Makanakop Shellhole do their bit to maintain this memorial portion of a town that so severely needs every one of us to care a little more, he said.

“By caring for one another, our families, neighbours, city, and country, we can make a difference and create a better future for the following generation.”

The St Andrew’s Pipe Band played beautiful yet sombre music at the event. The crew said they were excited to be part of the Delville Wood Memorial and had been preparing for weeks.

They shall grow not old, as we that are left grow old:
Age shall not weary them, nor the years condemn.
At the going down of the sun and in the morning
We will remember them.

From ‘For the Fallen’ by Laurence Binyon

A brief history of the Battle of Delville Wood

The Battle of Delville Wood was part of an Allied Offensive during the First World War, starting 1 July 1916 and was known as the Battle of the Somme.

After two weeks, the attack had made little progress, and the 9th Scottish Division was ordered to attack and hold the Village of Longueval.

The advance started at 3.25 am on 14 July on a six km front. There was no week-long artillery bombardment but a five-minute barrage just before dawn. The result was that the attack started with surprise, but after fierce hand-to-hand fighting and heavy resistance by mid-afternoon, only a small portion of the village had been occupied.

It became apparent to Major-General Furse of the 9th Division that to secure Longueval, Delville Wood had to be taken first. He had no option but to commit his last reserve — the 1st South African Brigade.

The attack was planned for 5 pm, but this was later changed to 7 pm and later again suspended to 5 am the following day due to the limited progress being made in Longueval.

Lukin was ordered to take the wood at all costs.

The South African Brigades 2nd Battalion would lead, the 3rd Battalion in direct support and the 4th in reserve. The three battalions moved out from Montauban before first light under the command of Lieutenant–Colonel Tanner of the 2nd Battalion.

At 6 am on 15 July, the attack commenced. The first attack progressed smoothly, and by 7 am, the Brigade had secured the southern half of the wood. By 2.40 pm, Tanner reported to Lukin that he had secured the whole wood, except for a strong German position in the northwest adjoining Longueval. Tanner had spread his troops along the entire perimeter in groups forming strong points supported by machineguns.

At 3 pm, the Germans counterattacked and were successfully repelled. Lukin sent forward messages urging Tanner and the battalion commanders to dig in regardless of fatigue, as heavy artillery fire was expected during the night or early the following day. As it got darker, German high explosive and gas shells increased in intensity and later that night, fire from the four accurately-ranged German Artillery reached 400 shells per minute into the wood.

At 0.35 am on 16 July, Lukin received orders that in the coming day, the South Africans were to block German access to the north-western sector of the wood at all costs. This was to allow the 9th Division to complete their intended capture of the northern part of Longueval.

The instructions were for the South Brigade to clear the north-western sector of the wood and then to advance westwards. The advance started at 10 am on Sunday, 16 July and failed. German opposition was too strong for the reduced strength of the South African Brigade. Following this failure, the remaining troops fell back to their trenches midway in the wood and were subjected to artillery fire for the rest of the day, to which they had no means of replying. By now, the situation had become desperate.

A second action was initiated before dawn on 17 July. German resistance was too great, and machine–gun fire forced the South African Brigade to fall back to their original positions, suffering a large number of casualties in the process. By afternoon, there was no change, save for increased German artillery fire. That evening Tanner was wounded in the thigh and was replaced by Lt–Col Thackeray (Commander of the 3rd Battalion).

Artillery fire continued to pour into the wood. By late evening, Lukin instructed all possible men to be pushed into the north-western sector to support the attack on Longueval planned for 3.45 am.

However, during the night, under an advancing barrage of 116 field guns and over 70 medium guns, the German Guards Division advanced, driving the South African Brigade back from their forward trenches, again inflicting considerable casualties.

On 18 July, the Brigade had succeeded in recovering some of the lost territory, not because of attacks by their reduced numbers but because the Germans had withdrawn in preparation for orchestrated counterattacks in other areas.

“          …Delville Wood had disintegrated into a wasteland of shattered trees, charred and burning stumps, craters thick with mud and blood, and corpses; corpses everywhere. In places they were piled four deep. Worst of all was the lowing of the wounded. It sounded like a cattle ring at the spring fair….

By 19 July, the few South Africans who were left were subjected to further shelling and sniping, the sniping now being from extremely close ranges. They had been in the wood and the raging battle for five days.

On 20 July, The Brigade was short of water, without food and unable to evacuate the wounded. Many groups that were isolated and out of ammunition had no alternative but to surrender. Thackeray had informed Lukin that his men were exhausted, desperate for water and could not repel a further attack.

At about 1 pm, the Brigade was relieved, and Thackeray marched out of the wood, leading two wounded officers and 140 other ranks, the last remnant of the South African Brigade. Piper Sandy Grieve of the Black Watch, who had fought against the South African Boers as part of the Highland Brigade in the Battle of Magersfontein in 1899 and been wounded through the cheeks, played the South Africans out. The survivors spent the night at Talus Boise and the next day withdrew to Happy Valley south of Longueval.

One hundred twenty-one officers and 3,032 other ranks had entered Delville Wood on the morning of the 15th. At roll call on 21 July, they numbered only 29 officers and 751 other ranks.

Today we stand here in remembrance of those that gave their lives and their youth for future generations. We will remember them.