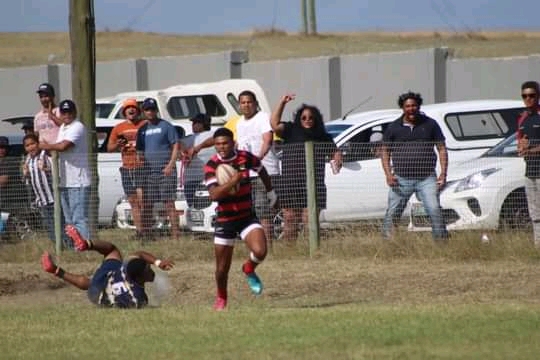 Trying Stars winger Lucian Milborrow scored four scintillating tries to help his side record a dominant 60-22 win over Lily White in their EPRU Grand Challenge Group C encounter at the Wentzel Park Sports Ground in Alexandria on Saturday afternoon. The home side took a narrow 20-15 lead at the break.

The visiting Makhanda side arrived five minutes before the scheduled kick-off time and were already on the back foot going into the encounter. But it must be said, they did pretty well and turned the situation around with an impressive first-half performance. Lily White put the home side under pressure in the first half, forcing Stars to make many errors.

Blues played running rugby and kept the ball alive by giving it air. Stars opened the scoring via a penalty by fly-half Brendan Coetzer in the 16th minute and followed it up with a converted try by Dwayne Forbes (7) two minutes later to take a 10-0 lead.

The home side continued their momentum, seeing Lucian Milborrow (11) score the first of his four tries in the 24th minute, converted by Coetzer. Stars led 17-0. Blues didn’t lay down either and kept the home side on their feet, attacking and keeping the ball alive with brilliant ball skills between forwards and backs. They were rewarded with three unconverted tries while Flinn Cannon (12) scored closed on the brink of halftime to give Stars a narrow 22-15 lead at the break.

The home side went into the break, and a stern halftime talk by their coaching staff saw Stars come out as a more dangerous outfit in the second half. Stars played with more freedom and structure; their favourite brand of rugby came to the fore and they ran riot, scoring a further six tries.

The Makhanda side’s defences started to lapse, and the home side attacking prowess was just unstoppable. Lucian Milborrow completed a hat trick of tries in the second half and was outstanding and devastating with the ball in hand. Stars were impressive in the scrums and lineouts, and their attacks were brilliant and effective from those set-pieces. Stars were also very aggressive at the breakdowns, especially in the rucks, where they were ruthless.

The home side entertained the crowd in the second half as they scored tries from their own half. Stars scored their ninth try in injury time, and the final whistle went off as the home side recorded a crushing 60-22 bonus-point win.

Stars coach Sheldrid Cannon was a pleased man but said there were issues to work on. “Our lineouts and scrums were solid, and our attack was good from that base. To score 60 points and nine tries was just great for us. Our breakdowns, kick-offs, and defence are areas of concern, and we need to work hard on them. Our game management also needs to improve, but I am delighted with the bonus point win and to see the young guns put up their hands today. We are now looking forward to the big SEDRU Derby against Brumbies at home on the 16 July,” Cannon said.

The Grocott’s Mail Sport/Daniels MEDIA Man of the Match went to Trying Stars flyer Lucian Milborrow. Lucian was in sublime form with ball in hand on attack and very dangerous, scoring four entertaining and impressive tries. He was also very good on attack and involved in several other tries on the day.