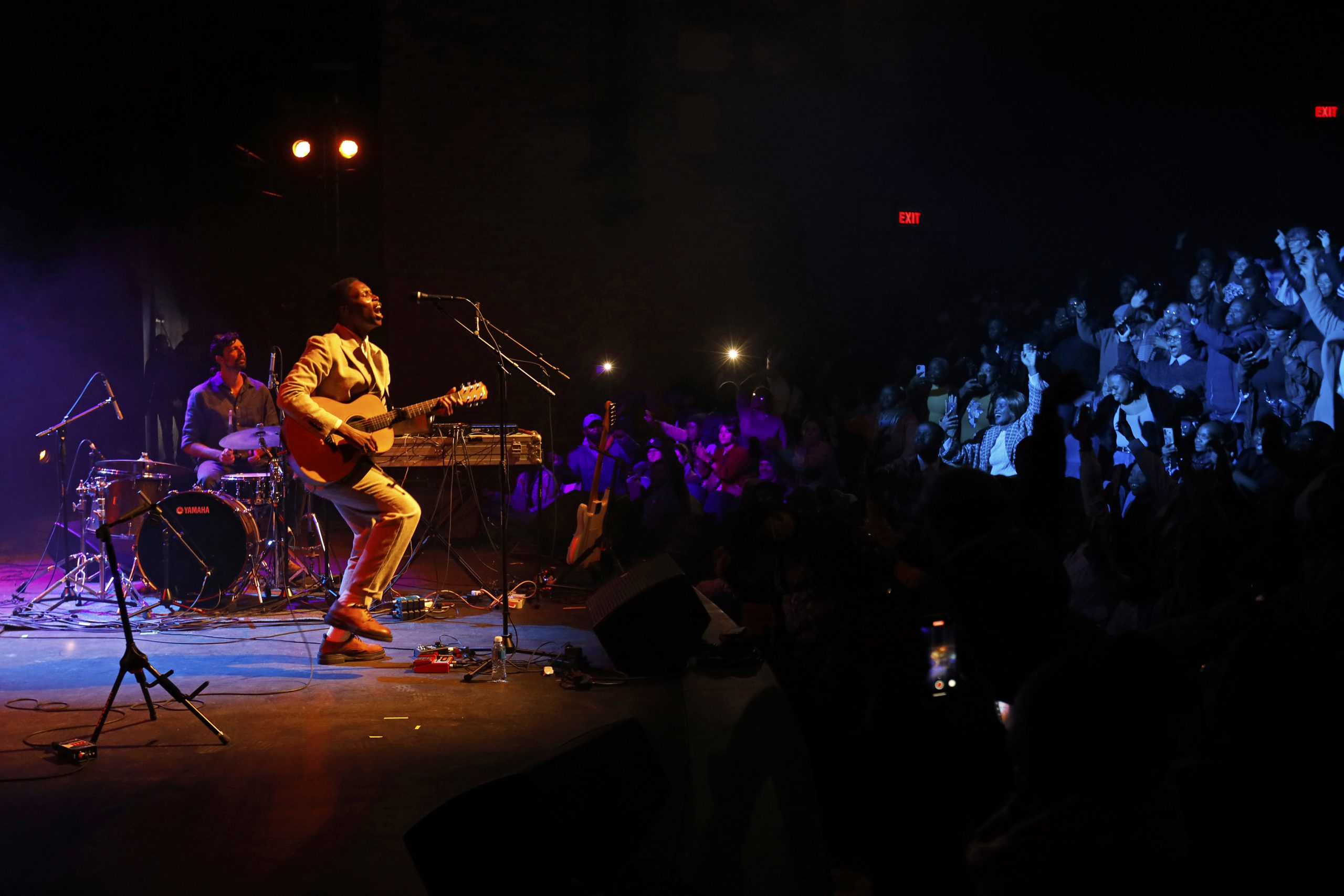 While waiting in the queue with fans itching to watch legendary Eastern Cape musician Bongeziwe Mabandla, I realise this would be something special – a festival highlight, a talk-of-the-town event. The undeniable buzz is bursting through the walls of Guy Butler Theatre. An audience this excited and talkative is yet to be seen at this year’s National Arts Festival (NAF).

The lights fade and the first to appear on stage is music producer Tiago Correia-Paulo, most noted for his work in film score compositions. The calm and collected artist instantly grips the audience with the recognisable rhythms of Mabandla’s African soul whilst subtlety controlling the loop station. As if by magic, Bongeziwe appears, dashing in an all-white suit with a guitar draped over his shoulder. “Oh my God. Oh my God,” said audience members amidst the immense rupture of applause and cheer. Despite his acclaimed success and extensive experience in live performance, the man-of-the-hour appears humbled by the reception.

The Xhosa singer, songwriter and actor was born in Tsolo, Eastern Cape. Here he began his career singing for his church. Upon matriculating, he enrolled at AFDA in Johannesburg. His first recorded album, Umlilo, debuted in 2012, and as the cliché goes, the rest is history. How wonderful to witness a locally-born performer share his work in his home province. He has been quoted stating that everything he does is measured by how artistic and interesting it is for him and his audience. Judging from the show, the audience seems satisfied with his artistic expressions.

Watching Mabandla perform live is mesmerising. His stage presence and ease of performance keep the whole auditorium off their seats for the entire hour-long set. Some of his biggest hits from the album iimini (2020) are especially well-received, including Zange, Jikeleza, and Masiziyekelele. During one magical moment, Bongeziwe moves away from his microphone stand to grace the hands of awaiting fans. Suddenly, he leaps from the stage onto the armrests of open seats and performs within the auditorium. Fuelled with the endorphins from a joyous and energetic evening, the crowd goes wild.

Sadly, the performance was a one-night hit at this year’s festival. Mabandla has been touring South Africa since the beginning of June, with NAF being his second-last performance. He is set to tour Europe, with his first stop being Germany. I suggest that in preparation for the possibility of his appearance at 2023’s National Arts Festival, you turn on notifications for NAF ticket sales. They are likely to go fast.

Previous ArticleCommuning with the ancestors
Next Article Undead, shape-shifting punk