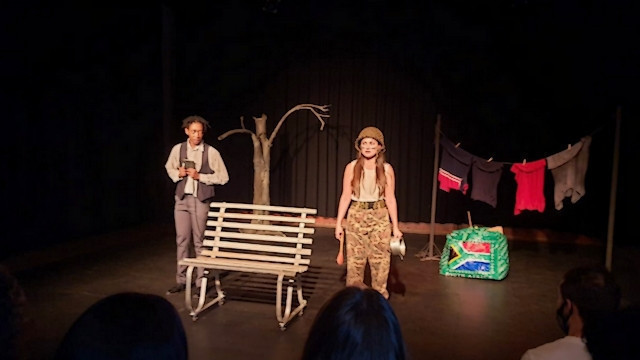 A bench, a washing line, a plastic bag, a white woman, a black man. A hero without a cause, a cause without a hero. On some cardboard reads “STOP!”. There is a pot and some imaginary beans. This is ISMISM… a play where nothing happens, twice.

In the age of social media activism, the awakening of ‘woke’, the death sentence of cancellation, and the heralding of false freedoms, writer and director Loti Makoti explores a timely truth: it is so easy to speak but so difficult to say something that matters. The synopsis seems simple. Two unnamed middle-class adults prepare for a protest in a park. But they are stuck in a Twilight Zone. Who is the lead? Are they for, against, or neutral in the situation at hand? Who is the marginalised group, and ultimately, what the heck is their purpose and motive? Spoiler alert: We receive no answers.

Does this purposeful purposelessness ring familiar? Ever read Samuel Beckett’s tragicomedy, Waiting for Godot? In short, Beckett’s piece consists of two characters who wait for the arrival of a mysterious ‘Godot’, who, spoiler alert number two…never arrives. The relationship between ISMISM! and Waiting for Godot is beautifully conceived. Like that of Godot’s, Makoti’s set is uncanny and simplistic. The bench is reminiscent of Vladimir and Estragon’s mound, and the washing line hangs in the absence of the barren tree. Yet, in absurdist fashion, we are left to decide for ourselves what each piece represents – that is, if it represents anything at all! Both works have dialogue that is as important as they are unimportant. There is also the frustration of anticipation that never divulges its secrets and rising action that climbs and climbs, never to climax. And in the end, we are left with humanity’s vain struggle to seek purpose and meaning in an uncontrollable world.

Actors Oratile Ndimande and Lisa Tredoux are more like vessels to transport ideas from text to audience rather than nuanced characters to be examined. This is no easy task, yet both performers succeed. The moments of silence on stage could have turned awkward, but Ndimande and Tredoux hold the space, and this enhances the angst of the piece. The production relies heavily on spoken word, yet both actors keep a Tik-Tok generation audience fascinated. If the acting was slightly off par and the content any less clever, the production would be much more average.

There are a few moments in the piece that toe the line when it comes to being problematic. At one point, the murder of George Flloyd is recreated, only to be labelled by the female character as “play play”. It appears that the piece is aware of its disobedience in the face of boundaries, weaving it into the absurdity of it all. Still, there could have been a trigger warning.

Overall, ISMISM! provides the audience with much to mull over and question, its content and structure mimicking the incongruity of our everyday lives. It is a piece that may manifest differently in each audience member, and those without knowledge of the absurd may find it difficult to swallow. But that is a part of its ironic intentions. For fans of Beckett, it is definitely a worthwhile watch.