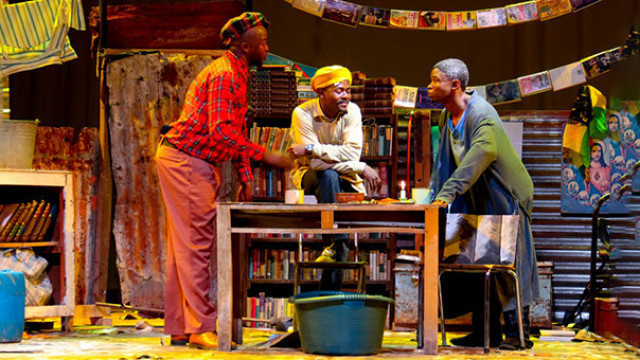 The post-colonial architecture of a corrugated-iron house takes the centre stage. Next to the small tin shack is a salvaged, worn-out bed. On the floor lie a considerable number of books, invoking in mind the words of the late activist and philosopher Steve Biko: “It is better to die for an idea that will live than to live for an idea that will die.”

Focused on a conversation between an elderly man and a young woman who is on the run from two murderous criminals, Emsini is a production exploring the rift between two generations in post-Apartheid South Africa. Director Mkhululi Mabija and the cast from Thapelo Tshite Art’s Development examine the clash in consciousness between the older generation who fought against Apartheid and the disillusioned youth of our democracy, who often resort to violent crime.

Daniel (played by Jackson Shuping) is inside the shack, a well-educated man who finds himself stuck in a cycle of poverty due to systematic oppression. Coming from a lineage of thinkers who believed that literacy, education, and mental empowerment are the most potent tools in the quest for liberation, he struggles to understand the lack of discipline and violence displayed by the youth in his community,

Easy to follow and well-scripted, this impeccable theatre production explores themes of poverty, oppression, and social ills, and more importantly, how different generations respond to these conditions in South African culture. It touches on the heart-breaking experience of black people in townships and the varying ways these conditions are grappled with. Though the older generation may deride the use of violence by the youth in South Africa, in this play, the audience finds out exactly how the youth justifies this lack of discipline.