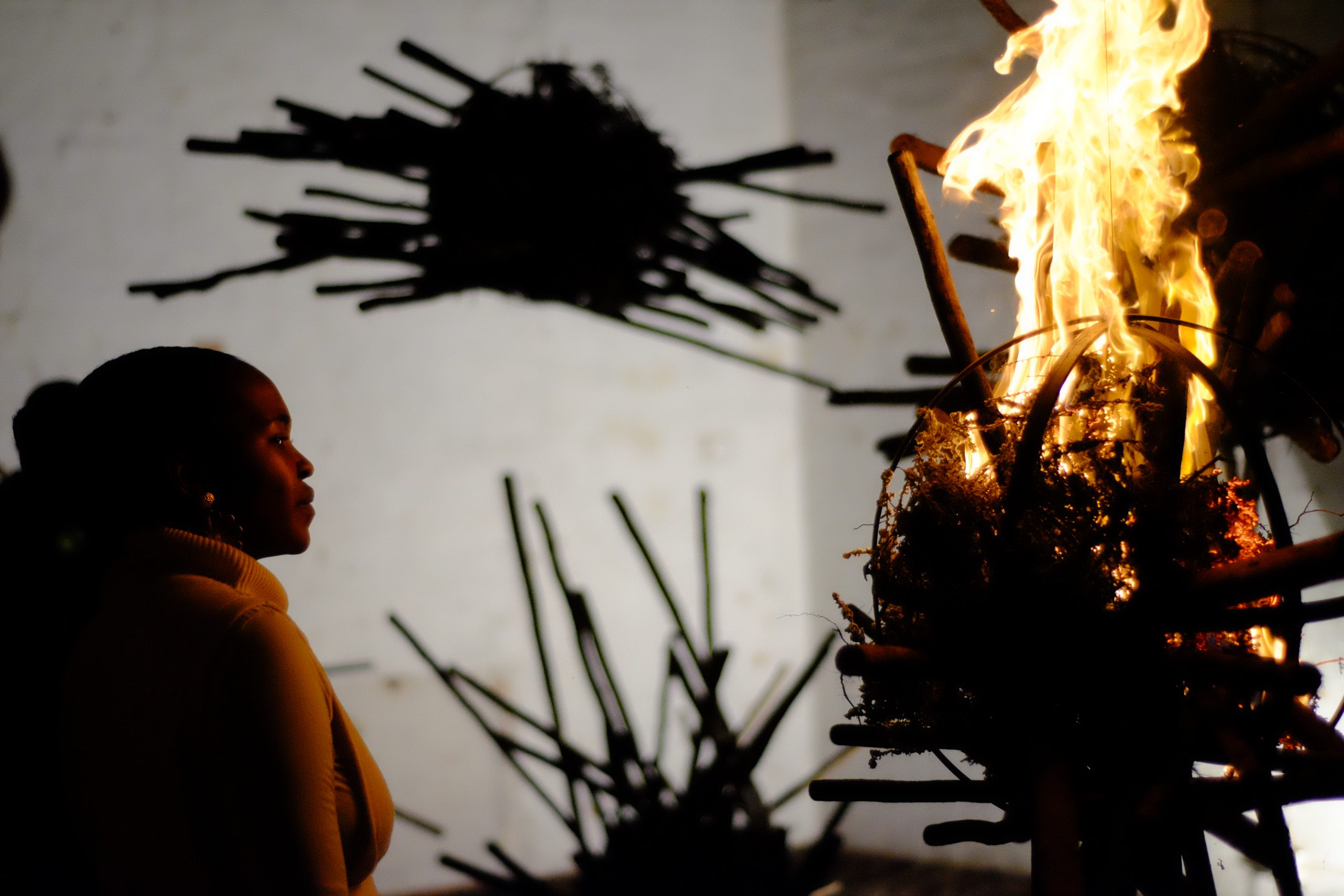 In the large upstairs room of Makhanda’s abandoned power station, projected films permeate the space, from its concrete eaves to the floor beneath our feet. Women dance and drum in moving waters, ground down their feet into the earth, and intertwine with the shadows of trees, dancing with the light. Ethereal sounds fill the spaces in between.

We take off our shoes and slowly enter the shallow sea on the floor, soft ripples circling out, immersing ourselves in this sanctuary. Buhlebezwe Siwani’s exhibition, Iyeza, is both refuge and journey. Named after the Xhosa word for medicine and healing, it is a meditative installation calling our bodies home, to the earth, to the sea, and to the skies.

The film, Yehla Moya (2022), is projected in staggered fashion onto two walls. Most striking, a gigantic cloth covers the room’s length, and a suspended projector paints swirling images onto the floor. Vivid and glassy, it draws us in, and our eyes flitter between the different visuals as they speak to each other, creating motion and fluidity in an otherwise static place. Stepping closer, it becomes apparent the material is covered in water, absorbing and reflecting back the film, the ripples shimmering with both sharpness and softness.

Downstairs lies Nga liphuza, nga liphalaza, ilangalibalele (2022), Siwani’s second exhibition at The Black Power Station. Circular metal structures hang in space, pierced through by indigenous wooden sticks and stuffed with impepho, the dried plant used to communicate with the ancestors. The room is filled with soil, anchoring participants to the earth. Yet her work is also ethereal, leading the eye to worlds above, speaking to the ever-present celestial bodies of past generations.

During the walkabout, Siwani lights some of the impepho, communing with her ancestors, and sweet smoke fills the air. Though the dryness of the Eastern Cape leads the impepho to combust into flames rather than simmer, Siwani is okay with this, saying that the work was, “Not what I wanted to make, but what the object wanted to become.”

Siwana, the Standard Bank Young Artist Winner for visual art and a trained spiritual healer, speaks to the powers of healing hidden in indigenous plants and the connections that African people and those from the diaspora have with water, the source of all life. These indigenous medicines, so central to healing, have been buried and threatened in the past by colonialism and the Witchcraft Act of 1957, and still now by climate change and its scorching of the earth in Sub-Saharan Africa.

In addition to the two installations at the power station, Siwani’s body of work includes another one displayed in the Gallery at the Round. They draw in all our senses, immersing us in the healing power of nature, often relegated to the past. Large in scale and deep in conceptual detail, Iyeza is a work of art not to be missed.