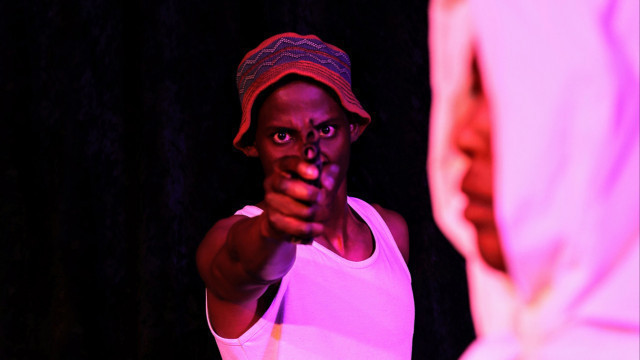 Everyone has a story to tell no matter how badly they have sinned. The musical theatre production, The Crime Scene, tells the story of a troubled young man raised by his single mother in a poverty-stricken home. This man has given his life to gangsterism, drugs, and alcoholism because of the empty void he feels inside.

An isiXhosa rap song plays in the background, the stage covered with yellow police tape. It sets the mood for a crime tale and is perfected by Siphumzile Pharela’s menacing aesthetic. Pharela plays a feared and despised township criminal, Xolani, who has based his career on housebreaking and hijacking.

Pharela has just finished checking in on a big score and goes about galavanting, squandering his loot in a nightclub with his fellow gangsters. Bottles of expensive champagne fill their table and glamorous women serve and entertain them. It is a pleasant scene for Pharela, portrayed so vividly and realistically, yet a distressing scene for his mother as she stays home wondering if her son will return home in person or in a body bag.

Pharela’s dirty money only serves his selfish needs as he still resides in a shack at the back of his mother’s RDP house. A 25-year-old man still feeding off his mother’s R450 weekly salary, earned from scrubbing floors, doing the laundry, and even picking up the ‘madam’s’ underwear. A salary that has stripped her of her dignity as her employers treat her like an illiterate black woman who is desperate for the weekly peanuts they pay her.

“Akho ndoda apha ezobheka imithetho (there’s no man that will set their own rules here),” Pharela’s mother shouts as they argue about his money-making ways. Pharela tries his best to avoid interactions with his mother as he fights his own demons. He yearns for a father figure and this is one void that his mother cannot fill. The closest Pharela has come to being exposed to a father figure is his relationship with gang leader, “Bra Jay”.

This is an evocative piece of musical theatre that sheds light on the long-lasting and harrowing effects of dysfunctional families, cycles of poverty and violence, and the trauma that often lies behind criminal activity.

You can catch this heartwrenching performance on the 1 and 2 July at Princess Alice Hall for R40.