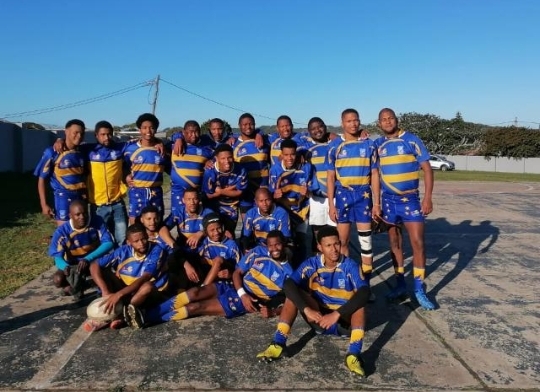 St Mark’s Alicedale extended their lead at the top of the EPRU Sedru Regional Log after an impressive 24-6 away win against host Kowie United. The second round fixture was played at the Station Hill Sports Ground in Port Alfred over the weekend. The visitors also took a narrow 10-6 lead at halftime.

This second-round encounter was billed as a revenge match for Kowie after losing their first-round fixture against St Mark’s in Alicedale. The large local crowd filled the ground and supported the home side.

It is never easy to beat Kowie at their faithful Station Hill, and St Mark’s knew what they were up against. It was a clash played in a good spirit as both teams gave their fans good rugby. Kowie had the home-ground advantage, but it must be said that they disappointed their fans at the end of the day. It was not the same Kowie side that beat Rosebuds in Alicedale with a bonus point a fortnight ago. Kowie also lost a few players due to injury while the Bulls came and surprised the host in their own backyard.

While Kowie made many unforced errors, St Mark’s used their opportunities, capitalised on the home side’s mistake, and put points on the board. St Mark’s bigger forwards took full advantage and gain momentum with the ball in hand. Sive Lithe scored a try for the visitors while Cameron Jewell slotted a conversion and a penalty for St Mark’s. Mason Brooks scored the only points for Kowie via two penalties as St Mark’s took a narrow 10-6 lead at the break.

The second half didn’t get any better for the home side and mistakes continued. The visitors’ forward dominance continued with their solid defences stopping the running rugby prowess of Kowie. Sive Lithe and Cameron Jewell scored further tries in the second half, while Kowie couldn’t score any points.

The game ended as St Mark’s came out 24-6 winners.

Kowie United assistant coach Kirt Wessels comgratulated St Mark’s on their win. “It’s back to the drawing board for us with lots of hard work that lies ahead with the remaining games. We made many mistakes, but St Mark’s used their opportunities and put points on the board. They made use of their big forwards and put us under pressure,” Wessels said.

St Mark’s director of rugby Donovan Williams said: “The game was played in good spirit. The forwards dominated from the word go in the scrums, rucks, mauls and line-outs, where Anton Botha and Cameron Jewell excelled. In the backs, Brett Arnolds and Joshua September were steady on defence and attack with Cole Kirkwood at his best on the wing. Kowie United’s running rugby was stopped by solid defence and by applying pressure. I’m not totally pleased with our overall performance; sometimes, we allowed our opponents to run with the ball. I’m pleased with our discipline on the field and their behaviour towards the referee of the day, but I’m disappointed in the yellow card we received on the day. We take nothing away from Kowie, but we dominated them in the forwards and the backs on the day. Our focus is to improve our next performance and maintain our position on the overall log.”

The Grocott’s Mail Sport/Daniels MEDIA Man of the Match award went to evergreen looseforward of St Mark’s, Cameron Jewell. Jewell was very prominent both on attack and defence, solid in the line-outs, scored a try and made a few turnovers at the breakdowns. He also kicked two conversions and a penalty with a 100% kicking record.