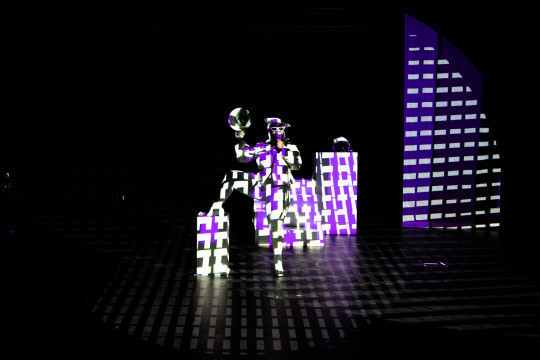 Dressed in a white spandex-like suit and shimmering high heels, Koleka Putuma summons Brenda Fassie’s ghost. “You see me, but you don’t see into me,” says Fassie to the media, her face projected onto a white sheet on stage, “I’m yours.”

In Hullo, Bu-Bye, Koko, Come In, the audience is asked to consider whose lives are considered lives, whose bodies are given names, and whose histories are remembered, without spectacle and superficial artifice substituting recognition for attention.

“We have come to bear witness here,” Koleka Putuma declares. Her multimedia performance piece speaks to the erasure of black queer women in the arts and society, whose work and lives are often reduced to the violence they encounter, their names mispronounced, their histories subdued. “This country erases you in its quest for freedom,” she announces.

Putuma wanders the stage, white projector sheets hanging, a white helmet resting on a white box, white steps reaching out into the darkness. The whiteness of the props and clothing Putuma wears is blunt and impossible to ignore – whiteness symbolic of the violence that has rendered invisible and forgotten the lives of these black women until Putuma reached into the archive. She doesn’t dust off the archive – she upturns the whole damn thing. She takes from the past what is needed to draw a map and a dream of a future where “black girls do not die.”

We are haunted by the ghosts that Putuma calls forward, such as Miriam Makeba and Fassie, using her body as a holding ground for their disembodied projections. A reminder that the ghosts are with us here in the present and will be alongside us in the future…

At first, a mourning, black and white words project onto the stage, moving, breathing. Passport documents, Google searches, words, geometrical shapes, and media footage draw the audience in as Koleka speaks in understated tones – ironic, dry, tired. Yet, her words are cutting, indicting and summoning the audience to account for their complicit observation. In one moment, Koleka projects live selfie footage to the stage, and we are given no choice but to see her. No longer an option to look away.

Towards the end of the performance, the projections become coloured and bright as Koleka, placing one foot on the stairs, body open, sunglasses on, helmet off, says a big fuck you to all who seek to erase her.

At the start of the production, Koleka speaks of utopia as elsewhere and immediately this calls forward the following from José Esteban Muñoz’s work Cruising Utopia: “…but we must never settle for that minimal transport, we must dream and enact new and better pleasures, other ways of being in the world, and ultimately new worlds.” Here in the last moments of the performance, Koleka lives this pleasure. And we must watch.