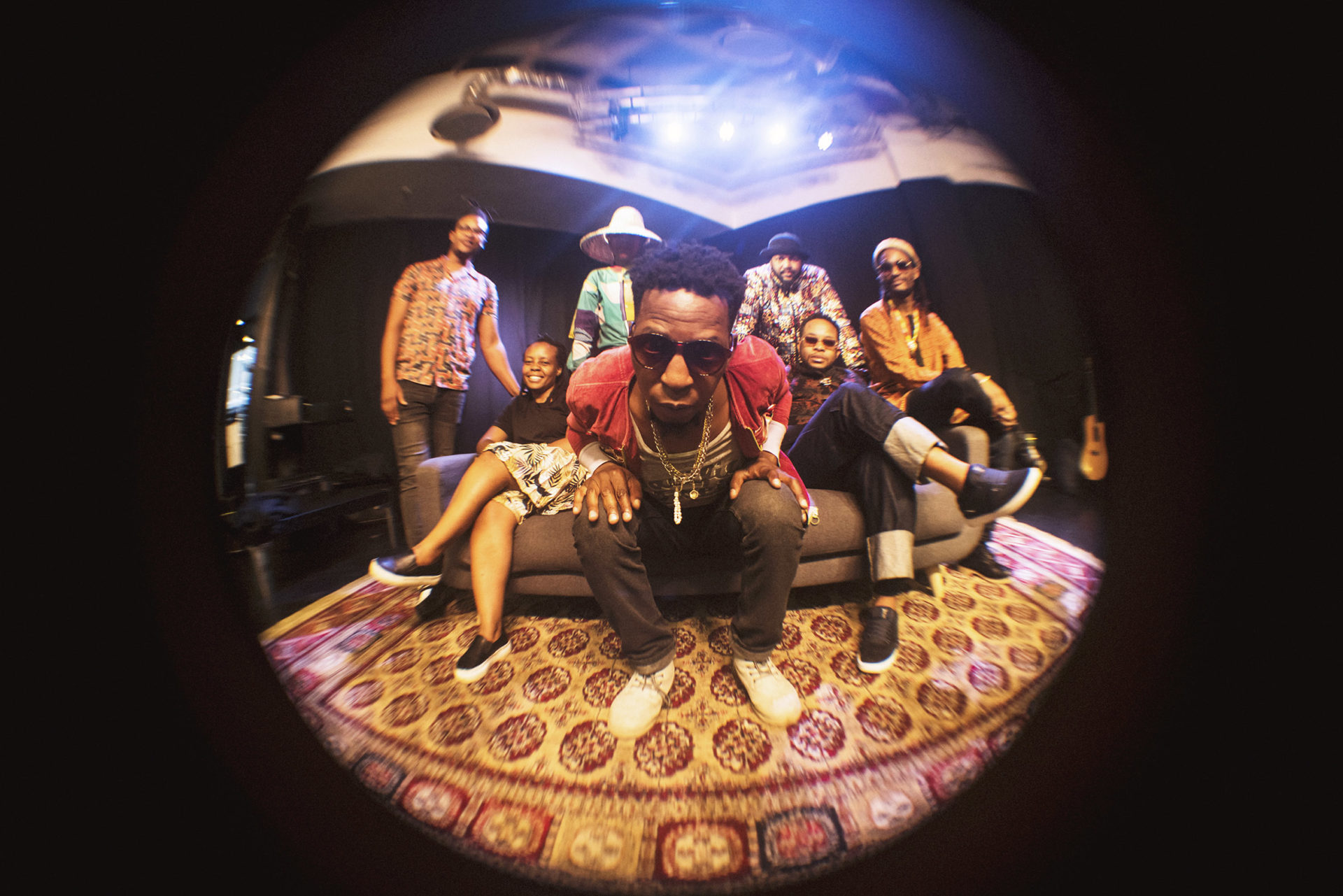 Two collectives, Spaza and orangcosong, took up residencies at the National Arts Festival and created projects that speak to the town and the spaces they found themselves in, writes ATIYYAH KHAN for New Frame.

As the National Arts Festival evolves, adding artist residencies marks a new shift in its programme. It has allowed different artists to create work in response to and from Makhanda. Two collectives, the experimental, ever-evolving musical outfit Spaza and the Japanese art collective orangcosong were selected for this year’s residencies.

Spaza, curated by Mushroom Hour Half Hour, arrived in Makhanda from Johannesburg five days before the festival began. Being based in The Black Power Station, a vibrant arts and activist hub located on a farm just outside the town, allowed the musicians to experience Makhanda in a unique way. They found a warm artistic community that made traditional food on the fire and brewed beer daily.

The band spent days working on a new concept, something that changes with every project they undertake. They thought deeply about Makhanda and came up with Spaza Makhanda, which had three performances at the festival.

For this project, they were inspired by the story of Makhanda Nxele, a warrior and prophet of Xhosa and Khoi descent, after whom the town was renamed and the music styles of amahubo.

“It was really about channelling the energy of Makhanda Nxele,” says Ngakane. “The way that the music started to come out was a reversion back to self, like we were embodying the spirit of Makhanda Nxele, but his life journey is ours as well.”

Their project worked on the theme of revolt and reclaiming. Other themes, such as prophecy, birth, betrayal and the promise of a better tomorrow, also came in. “Even though there are themes, they’re not in our mind. They’re coming out through our energy, our hearts and our memory. This embodiment is in our ancestral DNA,” Ngakane says.

“For me, it became about the people,” Jiyane adds. “For this place to be named Makhanda, I started thinking about how I felt about this place, especially Black people who live here. And what Makhanda fought for then persists to be a struggle today.”

“One of the questions we were asking ourselves is where is the ’hood? Where are Black people? This town is strange, right? Where are the taxis as well?” Ngakane continues, questioning the access to public transport.

“It’s a disruptive space that we’re fitting in,” Mngadi says. “It’s funny that we are at The Black Power Station because this speaks to our journey and who we are, even coming from Joburg. This is an industrial space, and we’re in a quarry. We are working. We are alchemists in terms of changing the narrative as well.”

Each day’s performance turned out differently. “There are so many surprising, beautiful things that happened,” says Jiyane. Recordings were made daily after each session, and the plan is to put them together for an upcoming Spaza Makhanda record. In July, they will perform at the Roskilde Festival in Denmark and Banlieues Bleues in Paris.

orangcosong, the Japanese collective behind Engeki Quest, had an altogether different experience. Artist and theatre critic Chikara Fujiwara from Yokohama and dancer and architect Minori Sumiyoshiyama from Osaka spent a month and a half in Makhanda, focused on creating a performative walking project.

The result is a game meets self-performed experience through walking, led by a “choose-your-own-adventure” book with a series of prompts guiding participants forward. So far, it has been performed in Tokyo, Bangkok, Dusseldorf, Macau, Lausanne and Manila, among other places.

It has been an unusual experience for the duo, whose arrival in Makhanda was their first experience of Africa. They did not have a car, so, used to walking in Japan, they spent days navigating the town and mapping out specific spots and routes.

“Participants should walk alone because this increases their sensitivity to their surroundings,” says Sumiyoshiyama. “It allows them to open their eyes to what’s around them. If you walk with groups or friends, there are distractions.” She points out that the book can be regarded as the script, the participant as an actor and the public as the audience, or something similar to a role-playing game.

Something that stood out for them, for instance, was the popularity of ginger beer, a drink that you don’t find easily in their own cities. “This kind of fragment of fact inspired our imagination to create this book,” says Fujiwara, adding that the work could not have been done without being in Makhanda.

Research was required before their arrival, and they partnered with researchers and historians to learn more about the town. The idea was to create an experience without a goal, with it being about the process itself. For Fujiwara, creating Engeki Quest is a way to break down and drill holes into the “invisible walls” we create that divide people.

Though deeply different concepts, both groups of artists agree that it was important that their residencies took place in Makhanda and that their work could not have been made in any other town, highlighting the importance of festivals encouraging such work to be created.