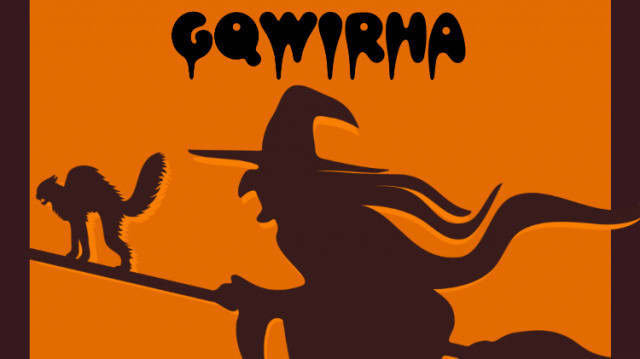 What timely load-shedding. The witches have just begun to chant. Despite being bathed in darkness, they continue their incantations.

Directed by Peabo Embrose Athenkosi, Gqwirha is a story of a young man who unwittingly becomes a victim of a secret society’s life insurance scam. The five women in the coven of witches, who have successfully gotten away with murder and pulled off scams in the past, won’t make an exception for this case.

With their unsettling gazes, screeches, and chants, the witches send chills down the spines of audience members, some people exclaiming in both amusement and disbelief. The young man’s storytelling, convincing facial expressions, and synergistic interaction with the audience create a lively experience and ease the tension many are feeling. Every action and expression embodies deep affiliations with the supernatural, save for a few conversations that might be lost in translation for non-Xhosa and Afrikaans speakers.

The set, a minimalist design of wooden boxes, brooms, a kettle, and a suspended inverted cross, is unexpectantly impactful. These objects are so well utilised that it’s easy to visualise where the actors are in every scene. The black stage and timely fading in and out of the lights perfect the eerie atmosphere of the play.

The actors display admirable professionalism when load-shedding begins in the middle of the play and continue with the performance. After the show, many audience members expressed happiness that the show wasn’t stopped. Some commented on how stunned they were that the electricity cut as soon as the witches began to chant, a spooky experience that left a deep impression.

Despite the heavy depiction of witchcraft and death, Gqwirha also provides moments of comedic relief. This beautifully scripted play will activate your imagination and curiosity about the supernatural and its influence on people’s lives.