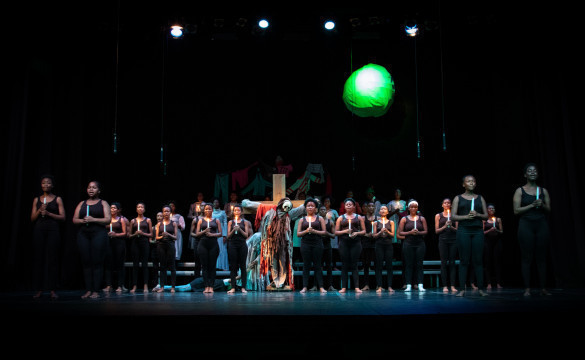 A scene from 'Bhuti is a beast'.

MUSICAL THEATRE: Bhuti is a beast
Review by MZWANDILE MAMAILA

South African communities are clouded by a dark cloud of predators who preying on young children.

Directed and written by Xabiso Zweni, Bhuti is the Beast is a visual art and musical theatre production depicting “Imoto Eba Abantwana (a car that steals children)”, a township myth about a horrific beast who feeds on children’s blood.

Jubilant teenagers from Walmer Township in Gqeberha filled the City Hall stage, bestowing a spark of energy upon the audience as they danced and sang. Using children to raise awareness about children’s issues was the best way to convey this play. However, using 50 actors on one stage might not have been the best idea. With hats falling off and shoulders bumping into each other, there was some clumsiness and confusion. Fortunately, their breathtaking talent made up for it as they sang, acted, and danced their hearts out.

Covered in gowns and slurping on coffee mugs, two ladies gather to share some morning gossip. The rumour of the beast slowly spreads throughout their township. Having a corrupt mayor in a shiny purple suit, purposeless police officers, stray dogs, false prophets, and a two-faced pastor, Bhuti is the Beast depicted the perfect township plot.

Humour was sprinkled throughout the play despite the seriousness associated with the topic of child abduction. The actors carried their characters splendidly and frequently engaged with their audience. Ululations and cheers rang out amongst the audience, impressed by these young talented stars.