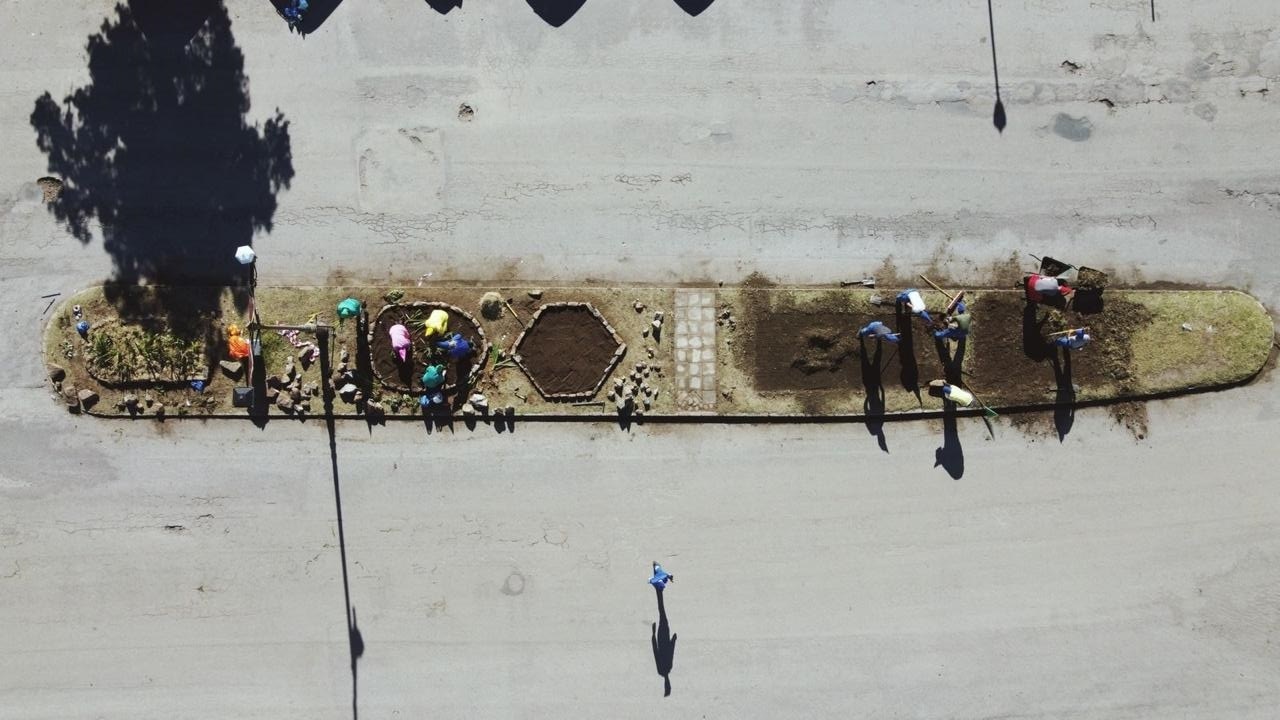 In rainbow stockings and severe glittering stilettos, a thick notebook clutched under his arm, Gavin Krastin, this year’s Standard Bank Young Artist of the year (we better name the bank or next thing, they’ll pull their funding for these awards, too) for performance art towers before us like an eccentric androgynous aunty about to address a Rotary Club meeting.

Except he’s also wearing blue construction worker’s pants and jacket with the reflective strips, over which is a corset-like brace around his waist. And a blue gnome’s hat.

His fragility accentuated by the precarious height of his heels, there’s a mild concern this man who has literally put his body on the line for art, for us, will totter back into one of the glass vases at floor level behind him and upset the sweet potato tuber balanced inside in an attempt to get it, and scores of others at various levels on plinths in the Monument’s Sun Gallery, to sprout. A largely vain attempt, as he explains the failure of the humble root vegetables to play along and let their tendrils spread through the dour architectural angles and queer the space with fecundity; a delicate technical challenge of light and temperature and moisture that has been largely unsuccessful. Labour without fruit, but labour nonetheless.

In fact, many of Krastin’s 12 labours, documented in this exhibition which is the fruit of his SBYA award, are futile. It won’t be long before the potholes they filled in wear away or new potholes form, like inverted molehills. New plastic trash and rubble will be tossed on the illegal dump he and his 11 gnomes cleared. The refurbished and gold-painted bus stop, itself an anachronous structure with no buses in the city, will fade, peel, and be tagged with spraypaint or plastered with handbills advertising back room abortions and penis enlargements. The queen proteas placed on the forgotten and abandoned settler graves in a humane act of open-eyed recognition will blow away and rot in the tangled grass. Perhaps the plants in the rock-lined geometric beds created to beautify the overlooked traffic island at the bottom of High Street will survive if the donkeys don’t trample them and the vandals don’t pull them out for who knows what kicks. Krastin’s 12 Labours, half of them undertaken in public spaces amidst the daily flow of Makhanda’s communities strangely interlinked by mutual compromise, so Herculean, are ironically Sisyphean, doomed to entropy. A metaphor for life and its resolute cycles. The Greeks knew what they were talking about.

Krastin, displaying all the solid fragility of a fluted crystal vase, explains his conceptual process; subversive brilliance glints off his phrases as his gentle manner extends an invitation of trust.

Vulnerability and trust are artistic approaches familiar to him. This is a person who has let strangers eat off his naked body, has carefully wrought violence upon himself as an eviscerating critique of the Constitution and bureaucracy, has stood naked before us, shivering and exposed amid Eastern Cape’s winters, labouring in his art so that we may face the void of our existence and gather the courage to love anyway. Which is the courage to fail. After all, we are not born of gods but of flesh.

Imperfect flesh that nourishes, nurtures and cares for us, only for us, in turn, having to do the same before becoming burdens once again ere the lights go out forever.

And so, through the vulnerable act of introducing us to his mother, the one person who can expose all he is, we come to the inner labours. These present a paradox, as they cannot be stolen, desecrated by vandals, or eroded by entropy, yet they require us to be defenceless while seeking nothing in return. Serving a cup of tea is less about the tea and more about the act of service, the results unclear, unlike the visible proof of waste removed or a pothole filled. Assisting an ageing mother to get a burst geyser fixed as the roles of cared-for and carer slowly, or sometimes abruptly, reverse, is a return of what was given. The satisfaction and joy lie in the giving, not the object. The act of self-healing, of connecting to one’s physical presence on Earth, has no objective results against which to measure effort; it is a journey of discovery, one Krastin had to undertake following an injury which essentially disconnected his spine from his pelvis.

And so we come to Krastin’s last labour, a gift to a mentor. His joyful transgressive dance for Rhodes Professor Juanita Finestone-Praeg upon her retirement from the academy earlier this year. While many may not know Finestone-Praeg, those who do will be hard-pressed not to be moved, possibly to tears, with the knowledge of how she must have wept with appreciation at the subversive joy in Krastin’s singular gesture.

While not performing in a traditional sense – he received news of his award a day after traumatic spinal surgery – yet performing, all the same, Krastin’s exhibition is a tour de force. Through documenting the detritus of labour, including the labour of performance, he advances a defining feature of his substantial body of work: the exposure of falsehood through vulnerability and excess.

There are many threads to be unpicked, all of them sewn through open engagement with artists, workers, organisers, and friends; Jen Schneeberger serenading the overall-clad, pointy-hatted gnomes as they fix a portion of the city’s streets, left to rot through the neglect of those mandated and paid to maintain them, brings to mind the labourers’ chants as they sweat; the choreography of creating a garden evoking a dance; the angle through which a graveyard is seen bringing to mind the relationship between heaven and Earth, the spiritual and prosaic. Metaphors conveyed through idea and video documentation layer upon one another, reaching back to the embrace of gods and mysterious motive, encompassing such a broad sweep of human experience that it comes to stand before the door of life and death. The one none of us can open.

12 Labours can be viewed at the Sun Gallery in the Monument. The next walkabout with the artist will be on Saturday 2 July at 2 pm.