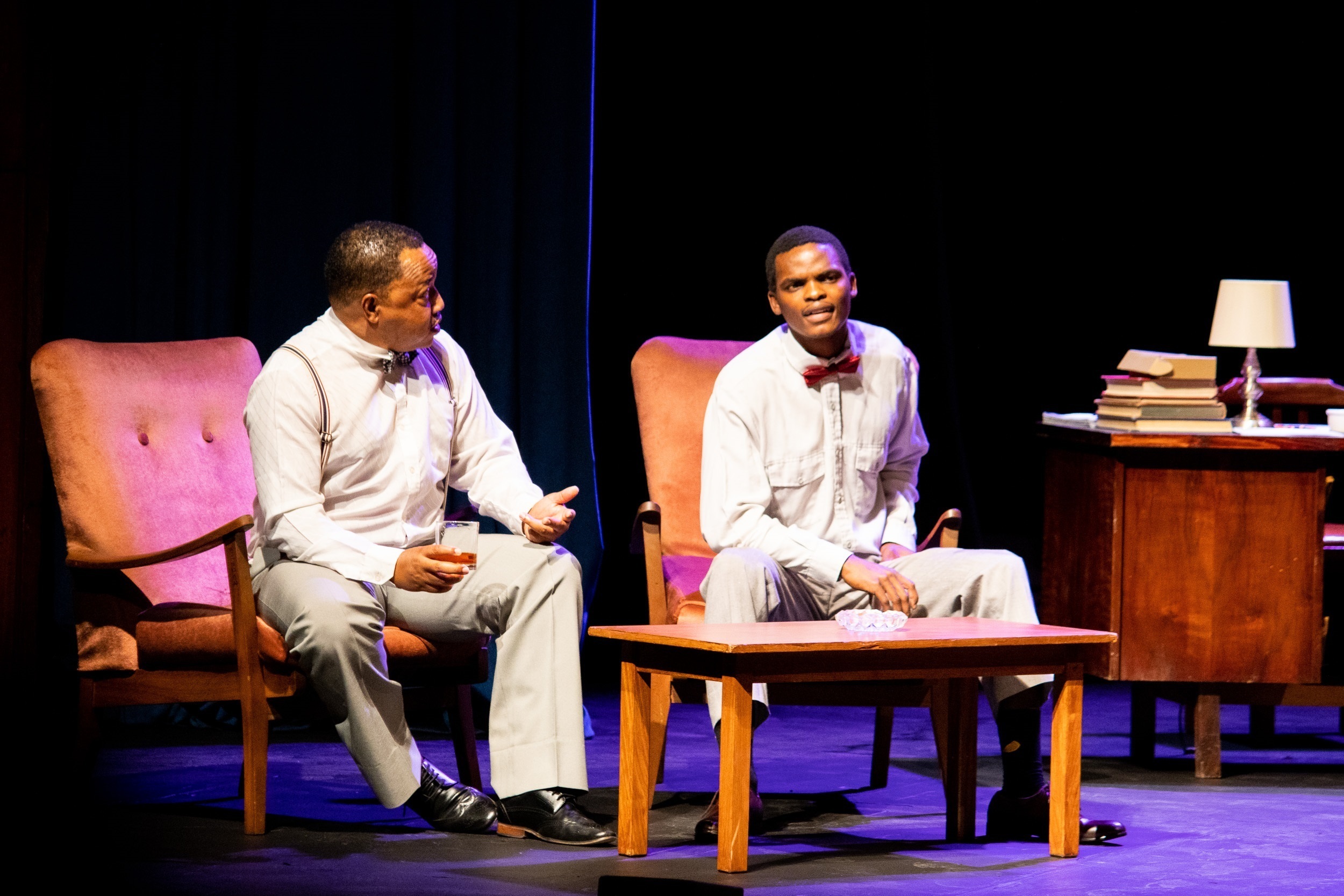 A scene from 'Bloke and His American Bantu'. Photo supplied.

THEATRE: Bloke and His American Bantu
Review by David Mann

The electric crackle of telephone lines and the click-clacking of typewriters activate the stage. It’s the 1960s in Harlem, New York. The poet Langston Hughes is seated in his elegant study, composing a letter to his friend, the London-based writer and actor from Sophiatown, William ‘Bloke’ Modisane. Perched on a chair in his scant apartment, Modisane responds in kind – warmly, lyrically.

So it goes with Bloke and His American Bantu¸ the Siphiwo Mahala-written, Sello Maake kaNcube-directed play about the enduring friendship between the two writers, intellectuals and activists.

Told predominantly through their letters and phone calls, the play chronicles a fair amount of the lives and careers of the two writers. Occasionally, this is punctuated by their physical meetings – smoke and whiskey-fueled evenings spent discussing art, culture, and politics from Harlem to Sophiatown.

Exiled in London, a place “where the weather is as cold as the people”, Modisane (Anele Nene) is broke and despondent, a man without a country. Hughes (Josias Dos Moleele), while successful and supportive of his friend’s writing, is similarly at odds with his identity, history and place in the world. In their rambling correspondence with each other, they find a much-needed respite.

It’s a lot to fit into a single performance, and the two-hander comes in at just under two hours – a lot to demand from both audience and performers. Much of this has to do with the script, which sometimes feels too determined in its attempt to accurately represent the lives and words of the two writers. As a result, there are scenes burdened with exposition, where key moments in the intertwined lives of Hughes and Modisane are referenced with dates and all, ultimately working against the rich prose that characterizes their correspondence.

Other times, we are given a full and far-reaching portrait of their intersecting politics, philosophies and social circles through simple and effective anecdotes. A King Kong record gifted to Hughes by Todd Matshikiza is one such example. Mention of the work coming out of Drum at the time is another, as is the invocation of fellow writers and activists such as Lewis Nkosi and Maya Angelou. We also learn of Modisane’s family back home, and the moment Hughes penned one of his most well-known lines at the age of 17, “My soul has grown deep like the rivers”.

The play is dynamic in its use of visuals. A sprawling set, while not always utilised to its fullest, does well to communicate the state of the characters – emotionally, financially and otherwise. In a particularly striking moment, Modisane is curled up on his worn single bed, drenched in a dark blue light, an empty bottle of booze beside him. Here, we do not need words to understand his loneliness, his losing battle with the incredible weight of history. Then there is the use of the screen which looms over the performance, literally, projecting blunt visuals – the JFK international Airport logo, the exterior of an American apartment building – and frequently distracts from the narrative rather than enriching it (PowerPoint presentation-style transitions and all).

There are moments of sharp humour, too, and this has as much to do with the text as it does with the performances of Nene and Dos Moleele. Hughes’ enduring American twang is no match for the isiZulu that Modisane tries to teach him, and the one-liners are well-placed and illuminating: “I have begun to introduce myself as an out of work writer-actor who wants to become an alcoholic,” says Modisane in reference to their mutual love for liquor.

It is when the story reaches the AMSAC lectures that Bloke and His America Bantu begins to sing. Here, the scenes are short and sharp, the performance full of conviction. Eagerly introduced by Hughes, Modisane delivers a series of compelling lectures. Part presentation, part performance, they are full of rhythm and lyricism, allowing for key moments of audience interaction. The lectures also cut to the heart of the play, demonstrating the urgent and vital work of writing to make sense of the world and one’s place in it.

While the play may be overburdened by its script, the story it puts forward is still a vital one. The rare friendship between Hughes and Modisane is one of the lesser-known stories of human connection amidst the struggle. Bloke and His American Bantu manages to mine the interiority of the two writers, illuminating their inner-most fears, ambitions and desires, as well as their collective contribution to garnering international solidarity against the apartheid regime.

Previous ArticleLive music at the Pothole and Donkey.
Next Article Load shedding at NAF