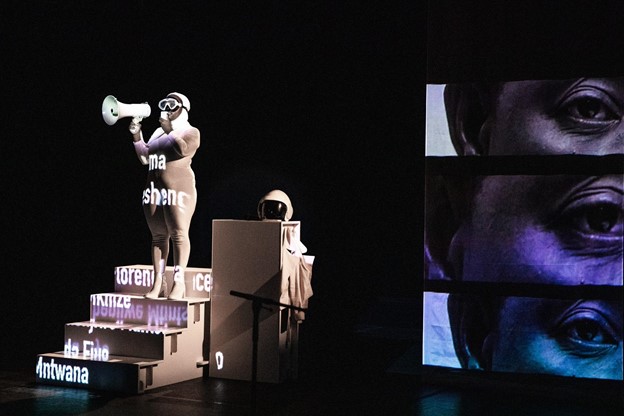 A scene from 'Hullo, bu-bye, Koko, come in', a multimedia stage adaptation of Koleka Putuma’s sophomore collection of poems by the same name. Photo: supplied

It’s been a relatively quiet Pride Month for Makhanda, but it is about to get better. Queer artists and performances featuring queer characters are prominent in the NAF programme during a month in which LGBTQI representation and activism are also centre stage.

Hullo, Bu-Bye, Koko, Come in is a multimedia adaptation of a collection of poems by award-winning queer poet, author, and theatre practitioner, Koleka Putuma. The title is taken from a Brenda Fassie lyric and explores the in/visibility of black, queer women in performance. The production has been performed in Cape Town and will be shown in Makhanda on 28 and 29 June.

A man, Kgotso, must decide between giving in to his family and society’s expectations, or being with the man he loves in the theatre production, Kgetho. Actor, writer, and director, Isaac E. Sithole, will be bringing the story to Princess Alice Hall from the 27th to the 29th of June.

Matchbox follows the lives of three young adults living in a township who have all experienced violence because of their sexuality and gender expression. Disastrous consequences await them when they attempt to seek justice for themselves. It was created by the young queer director and actor, Khanya Ngcuka, alongside their cast, and is scheduled for 24 to 27 June.

For the drag show lovers, Two Fags and a dancer is a comedic drama that shows us a horrendous experience of a drag performer who wears their scars with tremendous pride to pay homage to previous warriors. Catch the show at Victoria Girls’ High School from 24 to 26 June.

Gavin Krastin, 2021 Standard Bank Young Artist for Performance Art at the National Arts Festival, and a team of ‘queer gnomes’ have embarked on a series of good deeds to uplift the town for his work 12 Labours – a celebration of the modern heroes who activate civic works. In an interview with aMan Bloom, Krastin said the work was queer in the LBGTQI sense but was also for “anyone who’s just ‘queer’ and wants a better world and realizes that nobody else will serve it up.

“Someone at odds with a system that needs recalibrating. The power of the small. Fix the road, pick up some litter. We’re not going to save the world, but we did clean up the bus stop or save some succulents…

“Queer people like having fun. Singing and dancing just erupt. There’s a cheekiness, a playfulness. This is very consensual fun, and we’re deepening relationships,” Krastin said.

For music lovers, a pride event is happening at the Slip Stream Sportsbar on 24 June at 9 pm. DJ Von Dirty, Stone House, and Matinino will entertain us with their music. Come dressed as the fabulous people you are and stand a chance to win amazing prizes.

Are you an artistic, talented person in the LGBTQIA+ community? Then the Nkoli Fassie Pride competition is just for you. Submit any artwork on the theme of Pride to their email address (nkolifassie.soc@gmail.com) and stand a chance to win prizes.