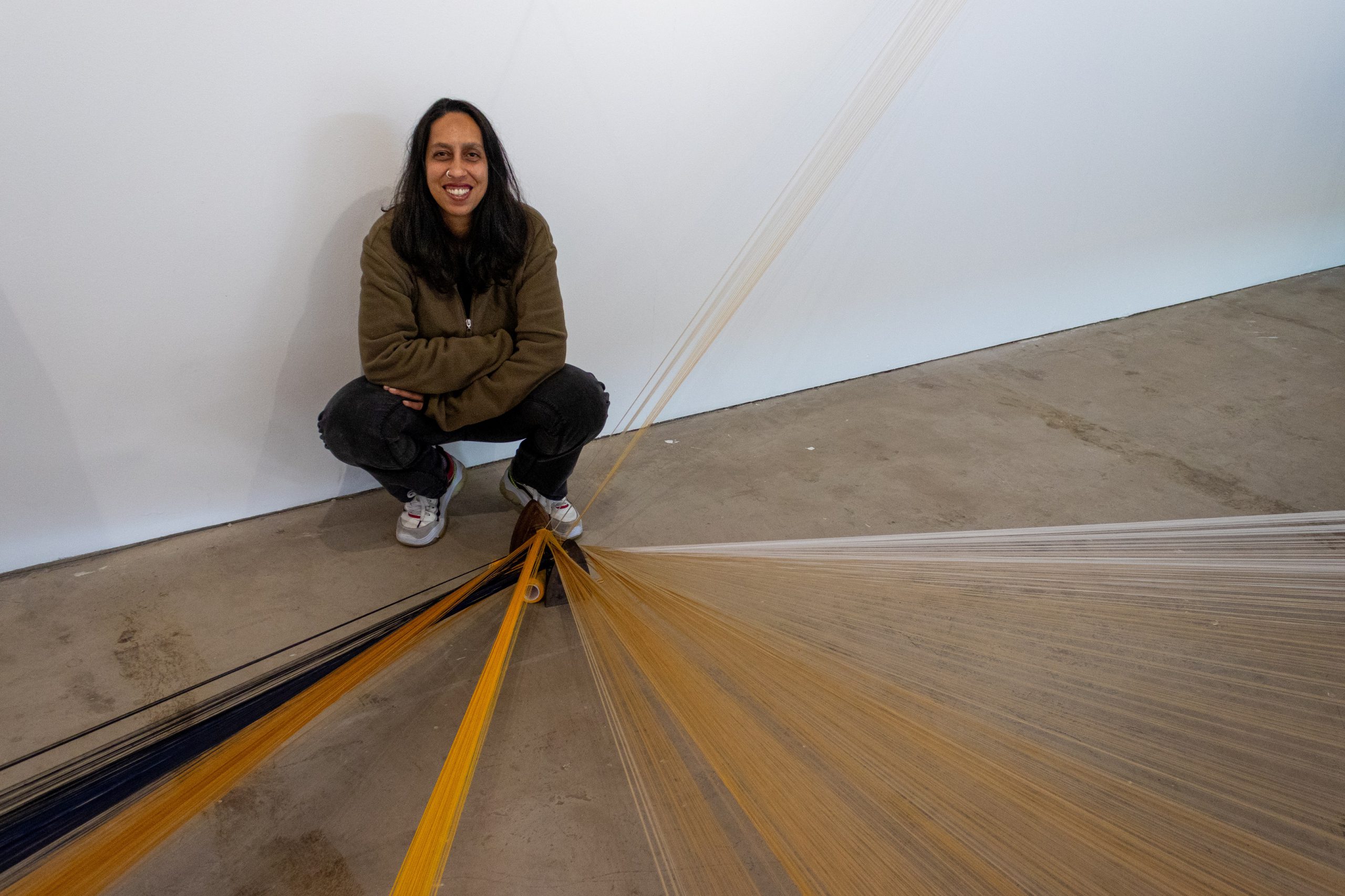 “It happens all the time; I’ll get tagged in a photograph by an influencer posing with the work. Then I get all these new followers!”

The artist Usha Seejarim is talking about her pair of red metal wings installed outside the Radisson Red Hotel in Johannesburg’s flashy Rosebank district. Crafted out of the bases of old clothing irons, they’re a frequent feature in many an Instagram post.

In Makhanda, a similar, although smaller and unpainted pair of wings titled ‘Impeccable Freedom’ has appeared, hovering in the Monument building’s atrium space and accompanying her solo exhibition at this year’s National Arts Festival, Tethered Storyline. Like so much of Seejarim’s work, the wings are made from found materials, given a second life, and charged with the complexities of labour, gender, and materiality.

In Tethered Storyline, an installation-based exhibition, Seejarim takes another common domestic material – thread – and puts it to work. Thread occupies and activates the space in a proliferation of line and colour, a spectrum of red, white, and yellow. Anchored by wall hooks and vintage stove-top clothing irons – the ones mostly used as ornaments or doorstops these days – Seejarim uses the material as linework, crafting striking forms and gestures in mid-air.

As for the storyline signalled in the exhibition’s title, vintage irons carry their own narrative for Seejarim. “It’s a matriarchal lineage that reminds me of my grandmother,” she explains at the exhibition walkabout before adding, “But it’s also very much a collaborative installation.” She is talking about the process of creating the installation – her and her team of assistants – and also about the varying perspectives and participatory engagements brought to the work by viewers. In short, the stories in the exhibition are yours to craft.

Binaries abound in Tethered Storyline. There is pleasure and pain, freedom and restriction, fragility and power, too. While the threads might appear thin and delicate, the vintage iron they’re tied to needs to be bolted to the ground. In another section of the room, lines converge to suspend a single iron base. This duality also resonates in her steel wings – weighty metal objects made to float.

Still, it is the simultaneous sense of play and precarity that is most prominent in Seejarim’s installation. Tethered Storyline invites you into its network of fibre and colour, but challenges you to stay within its unpredictable boundaries. As you weave in and out of the structure, careful to keep clear of the threads, it shifts and changes its form around you. Colours take on different hues, and pathways diverge, disappear, or withdraw into rich points of origin.

You emerge where you entered, although with a more intimate understanding of the world Seejarim has crafted. What was first a collection of lines in space becomes a network of rooms, scenes, and narratives through its capacity for play and participation.

“Are you worried about people accidentally breaking the threads?” I ask Seejarim after the walkabout.
“Not at all. It’s great to see people navigating the installation. It’s a vital part of the work,” she responds, watching crowds venture into the work, cellphones in hand. “And taking selfies with it, of course.”