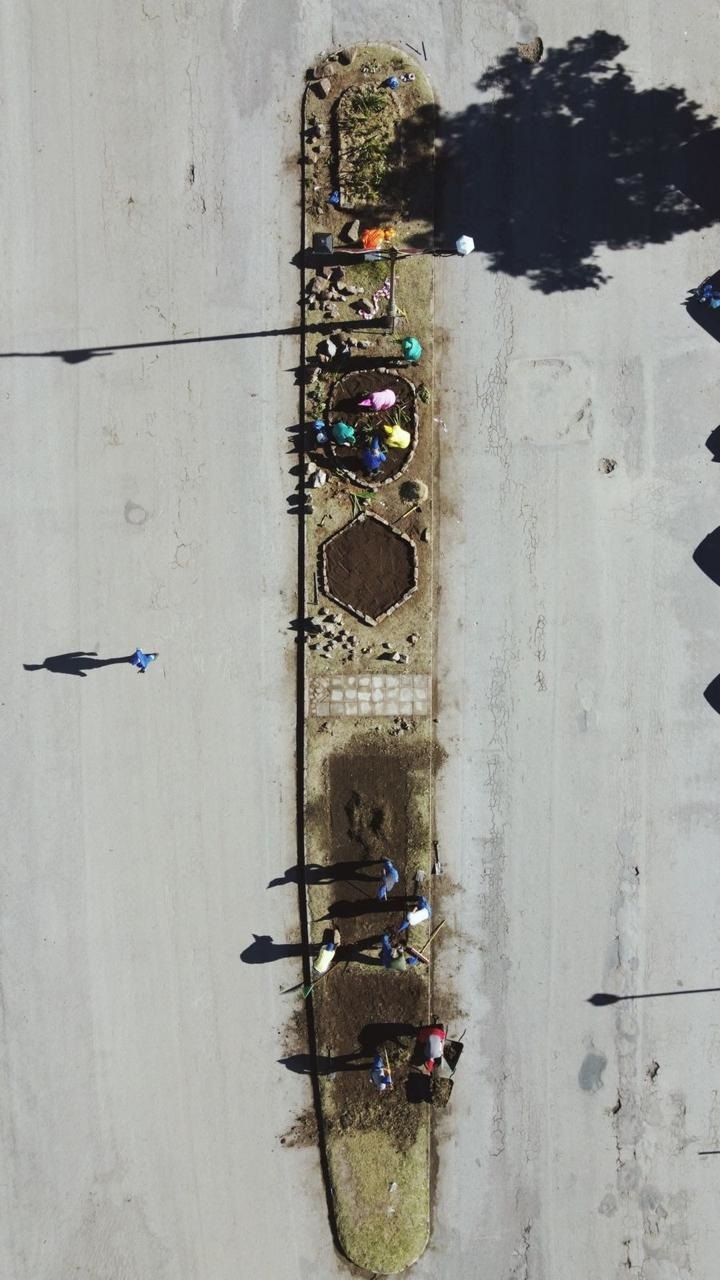 An aerial view of a beautified traffic island in High Street. Artists have joined efforts by local businesses and citizens to improve the city in anticipation of the Festival. '12 Labours' by 2021 Standard Bank Young Artist for Performance Art Gavin Krastin's commit acts of community service through the efforts of a group of brightly-coloured gnomes. Photo: supplied

Makhanda is dusting off the disappointment of two years without its annual flagship event, the live National Arts Festival, as it prepares to welcome back visitors for the cultural feast from 23 June – 3 July. The mood is one of excitement and anticipation as the Festival enters a new chapter in a new time.

National Arts Festival CEO, Monica Newton, said, “If enthusiasm is a yardstick, this is going to be a great Festival. But on the ground, it’s difficult to predict what the turnout will ultimately be. We’re optimistic but measuring our expectations in these tough economic times.

“It’s very encouraging to see that the accommodation establishments across town are reporting brisk bookings, and there is activity at the box office, so it’s apparent that the hunger for a live, immersive experience is calling Festival-goers back.”

The Festival has, in previous years, brought around R90 million into the city. For some, it’s a festive celebration, but for many, there is an opportunity for income generation, directly with the Festival or in surrounding businesses.

Message from the mayor

Makana Executive Mayor, Yandiswa Vara, said, “This is a great opportunity for the town to show its true potential. We have missed the festival and the economic [stimulation]in the town.”

“We look forward to welcoming back the artists and cultural audiences who inject such positive, creative energy into the city during Festival time.

“We will have over 40 stores and activities placed around the town, particularly around the Cathedral to promote SMMEs,” said Vara. She is aware of the high expectations the municipality needs to meet for the NAF to be successful.

The traffic and fire services are on standby.

Vara acknowledged that Makhanda’s water shortage is a problem, but plans have been made for the festival. “We will still [turn off]water at night due to the upgrades taking place at the James Kleynhans Water Treatment Works, and to manage the water levels. But residents will have water every day unless there is a burst in a specific area.”

Makanda remains water-stressed, and while the situation is stable, visitors are asked to conserve water carefully during their stay.

Just over R18 million’s worth of road replacement and resurfacing work commenced in Makhanda in 2021, focusing on the city centre and Joza. Business has also been active in instigating changes, with internet fibre suppliers Vox Enterprise and supplier development partner 51% black-owned EcoLogic, partnering with a local service provider to repair potholes in the city.

“The city has been preparing, and working hard with our partners in business and community, to ensure that the city is safe and clean for the event – but this is also ongoing as we strive to reinvigorate Makhanda.”

Makhanda Pick n Pay manager Blendon Windvogel said their business had been actively involved in improvements in the town, such as fixing potholes and helping with food outreach and transport for the elderly.

Artists have also joined in to improve the city for visitors and residents. 2021 Standard Bank Young Artist for Performance Art, Gavin Krastin, has already begun performing his National Arts Festival piece, 12 Labours, which swaps the mythological masculine hero of war for modern heroes who commit acts of service in their communities. A group of brightly-coloured gnomes have been spotted planting verges, and painting bus stops on weekends in the city.

Anticipated load-shedding over the weekend is set to add a layer of complexity to the programme schedule. Still, the Festival has navigated load-shedding in previous years, and some of the Festival’s venues are equipped with generators. Venues without generators will work with emergency lighting where possible, or the shows will be rescheduled.