ActionSA has launched in the Eastern Cape 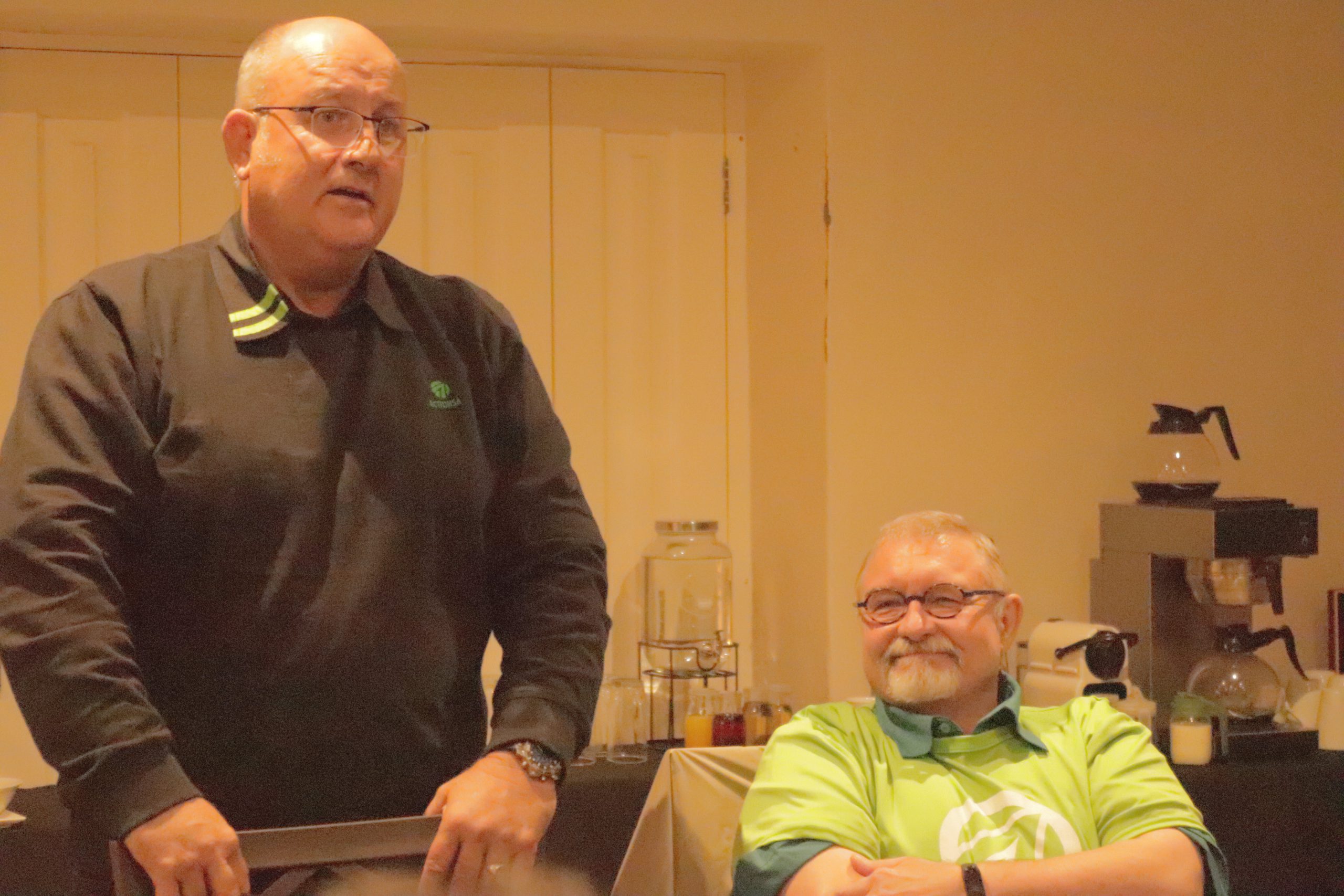 “The era of action is upon us,” said ActionSA Eastern Cape chair Athol Trollip, the guest speaker at a recent gathering of party enthusiasts in Makhanda.

Trollip said Makhanda should be the Stellenbosch of the Eastern Cape. Both are educational centres of excellence; both are historic towns.

“My son went to Rhodes, but the deterioration in Makhanda over the last 27 years has been very marked,” Trollip said. “Infrastructure has collapsed and decayed in Makhanda because of a lack of mundane routine maintenance – there is no political accountability, no leadership.

“What I see happening in this town shows weakness. I believe this town needs leadership. Look what’s happened to you – you have a fragmented opposition that plays into the ANC’s hands. What have you really achieved? When I saw what happened to the Makana Citizens Front (MCF) over the last couple of weeks, it was sad and completely unacceptable.”

Trollip said the city needed leadership. Makhandans, like citizens elsewhere, had lost hope in politics. He said the Democratic Alliance (DA) did not have a strong track record in the city. This had left locals stranded under corrupt ANC rule.

“You can imagine the difficulty for some of our top private schools to attract kids and sustain those schools once those parents say we’re not going there anymore because there’s no water and our kids are unsafe.”

Trollip said he was fond of the name ActionSA because it’s a verb; it’s a command to take action and address the state of our country.

“The art of politics is to convince people to change their minds. And I have a mind, and I changed my mind. I have a heart and mind for this province,” he said.

Trollip started his political activism in the early 1980s when he campaigned for his father in an election in the Albany constituency for the Progressive Federal Party. When he left the DA in 2019, he had been an elected public representative for 25 years.

“I’m very happy to say that I was never charged for fraud or corruption or telling a lie, or something terrible. I’m happy that I left politics with my brand intact.”

“I regard myself as a conviction politician, not a career politician. When I lost my conviction in the DA, I left the DA,” he said. “I felt a bit liberated after leaving politics because I was worried that our society had become more and more polarized since 1994.”

Here are some other annotated highlights from his speech:

“I grew up in Bedford, where unemployment is over 80%. What poverty has done is escalate urbanization to an unprecedented level in this country – people leave their homes and get dislocated from families that don’t live in the cities. They look for jobs that aren’t there. And they live in the most terrible conditions. They are transit camps which have no access to service delivery. And their social fabric gets even more dislocated with those conditions.

“So that’s what all of our cities are faced with. And it’s something that requires some serious thought from all of us and collaboration to fix it because if it isn’t fixed, it’s a recipe for clickbait rhetoric by populist politicians. They will bring upon this country a revolution that we can’t afford.

“So you know, things are bad now – and they’ll start going from bad to worse. South Africa is on the precipice.

“Eastern Cape Premier Oscar Mabuyane has presided over 48% unemployment and the worst governance service delivery matrix in the whole country. Some of us celebrated his re-election because the least bad guy won. But, we are celebrating mediocrity.”

“We’re going to be more of the same from Oscar Mabuyane and the people elected with him. And then, I think, ‘What are we going to do to fix that’?”

“If you just sit at home and think you can’t do anything, you actually can do something. You just need to do something – you’ve got to act.

“Mashaba attracted my attention because he started with 2.5 million South Africans making written submissions about whether he should form a party and what he should concentrate on.

Action SA contested in just six of the 260 municipalities in the local government elections but won a 2% share of the nationwide vote. The party attracted voters from the suburbs and townships equally. No other political party has been able to do that on any significant scale.

“ActionSA is the only authentically multi-racial party now. You can’t be non-racial if you don’t understand that there are black people, coloured people, white people, and Indian people, different cultures, languages, and ethnicities. We are a proudly multi-racial organization. And we all come from different backgrounds – we’re a melting pot of South Africans.

“Mashaba is unconventional and is relatively uncontaminated. He’s got some refreshing views, and for me, he is primarily pragmatic. Pragmatism, to me, is the most important modernism, not nationalism, not communism, not socialism, not liberalism.

“One of the most successful leaders in Asia and if not the developing world is Lee Kuan Yew, former president of Singapore. He had a magic recipe to turn his country around. He used three letters for this magic recipe. MPH.

“The first one is M for meritocracy – find the best people to do the job and get the job done. P of pragmatism. Pragmatism is about taking the best from all the other isms to make things work. And H for honesty. He didn’t tolerate corruption.

“We need that kind of pragmatism in South Africa.

“I was mayor of NMB, and we turned it around. Not because of me. We had a team and a plan and ran it like a business.

“I’ve seen accountability and ethical leadership on display, and they are primary values for Mashaba. I’ve seen him fight people. He fired many people when he was a mayo”.

“He holds people to account. I think that’s what South Africa desperately needs. He’s heavily invested in this country. He made his money the hard way. He’s got skin in the game and is the right kind of person we need in politics.

“Mashaba said that his business flourished best when he surrounded himself with strong people who disagreed with him”.

“He was at his most vulnerable when he was surrounded with yes people”.

“I love that Mashaba has the mentality that said, ‘Don’t bring me a laundry list of all the problems, do the washing’.

“We are not going to go into coalition with the ANC. You can’t fix something with the very people that broke it. Our objective is to remove the ANC from government”.

“It’s not in our interest to cannibalize the DA – we will collaborate with the DA. The DA does well in government, but they’re not a creative opposition”.

“ActionSA will focus on the 53% of the electorate that did not vote in the last election. We need to go and reignite and activate those people”.

“Do something, take action – move and make it happen.

“I hear the ANC says they are going to reinvent themselves. Think about this. Have you ever known a habitual criminal, a substance abuser, or a serial woman and child abuser to self-medicate and self rehabilitate? The ANC needs to lose and go.

“So we can choose, we can be part of those valiant people who strive. If we come up short, at least we know we were in the game. In the end, we might know victory, rather than knowing defeat without even trying.”

Trollip offered this quote as inspiration:

It is not the critic who counts; not the man who points out how the strong man stumbles, or where the doer of deeds could have done them better. The credit belongs to the man who is actually in the arena, whose face is marred by dust and sweat and blood; who strives valiantly; who errs, who comes short again and again, because there is no effort without error and shortcoming; but who does actually strive to do the deeds; who knows great enthusiasms, the great devotions; who spends himself in a worthy cause; who at the best knows in the end the triumph of high achievement, and who at the worst, if he fails, at least fails while daring greatly, so that his place shall never be with those cold and timid souls who neither know victory nor defeat.”

Trollip quoted the former president Kgalema Motlanthe, who predicted the end of the road for the ANC. Athol says the ANC needs to be removed from the position of power because there is no going back from their incompetent leadership.

“The Department of Affairs has proven to be incapable of dealing with the influx of immigrants. The failure of political leadership in this country has led to an influx of immigrants without proper documentation. If you go through the country, you will encounter several corner shops that South Africans do not primarily own.”

Trollip also highlighted the importance of offering and encouraging basic skills to the South African people. There is a child support grant, retirement, and unemployment grant. Without a doubt, these have been proven to help support families, he said. But, the government needs to start offering basic skills and encourage people to create work opportunities for themselves.

Trollip said it was essential to adapt; not only has the party been on the ground campaigning, but the effective use of social media and trusting the youth of this country has been a powerful tool for the party. He said no other political party uses the power of social media like ActionSA.