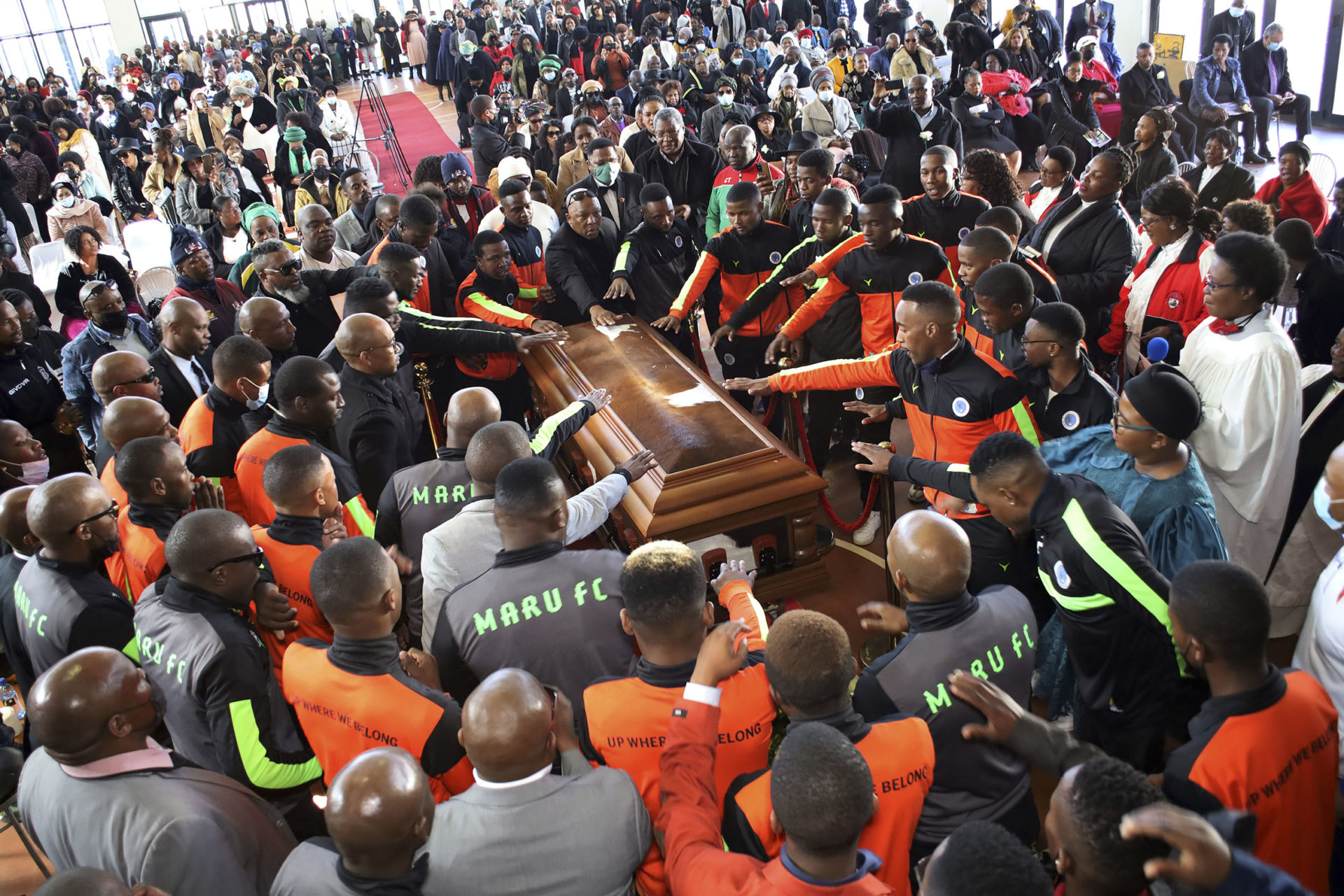 3 June 2022: Mouners and soccer players sing while paying their last respects at the funeral of Fundile Jeff Budaza who was killed outside his house in Extension 4. Budaza was known for exposing corruption in the town. Photo: Bonile Bam

Disgust at rampant corruption in the Makana Municipality took centre stage at the funeral of one of its brave officials who fought the criminality he saw around him and was likely killed for it, writes ANNA MAJAVU of New Frame.

“Who shot you in the back? Who gave the command? At what cost?”

These are some of the questions the Unemployed People’s Movement (UPM) wants to be answered after the brutal assassination of ANC activist Fundile “Jeff” Budaza, 54, on 25 May.

The fatal gunshot came from an unknown person in an unmarked vehicle as Budaza stood in his driveway at home in Extension Four, Joza. The driver sped away immediately after the shot rang out, and Budaza died a few minutes later, leaving behind two teenage children and a close, extended family.

Budaza, manager of Makana’s Parks and Recreation Department, was also a famously non-partisan community builder. He had criticised the municipality’s leaders for corruption many times over the years. He decried money laundering to ghost workers and the municipality’s failure to provide decent basic services.

Four memorial services were held for him last week, culminating in a funeral on 3 June attended by over 1 000 people from across the political spectrum. It was held at the Joza Indoor Sports Centre, which Budaza was instrumental in getting built when he worked as the municipality’s sports officer.

“uJeff was against corruption. Somebody has failed us, and those people are getting paid. They are stealing from us, the poor … and then they say we are enemies when we talk about that. We are not your enemies. You can come and kill me if you wish,” thundered Archbishop Nkosinathi Ngesi, opening the service.

Ngesi was distraught at the loss of a man described as a “unifier” in the town, who always took the side of the suffering people on the ground, irrespective of the political party to which they belonged. Makhanda residents were glad when Budaza became a manager in the municipality “because we knew that there was someone with a vision to uplift our town”, Ngesi added.

Though a proud member of the ANC, Budaza always “spoke readily of the ills of corruption that had overtaken the movement”, said Ngesi.

“When equipment was being stolen, Jeff stood for us,” Ngesi said, referring to a scandal in Makhanda in 2012 when R10 million was given to a contractor to build four parks in the municipality, which has not a single playground. Plants and equipment were stolen from the building site, and Budaza criticised municipal officials heavily for not securing these items.

A sports lover and supporter

Budaza was an outstanding footballer as a student and was called to try out for Mthatha Bucks in 2001, but a knee injury ended his hopes of playing professionally. He went on to found the Makana Rini United Football Club, also known as Maru FC, whose young members lined his coffin at the service, ushering funeral guests to their seats and handing out apples.

While still the sports officer, Budaza managed Makhanda’s 2010 World Cup programme and had high hopes that the community would pull together to secure one football for each of the 8 000 children in the town over the age of five. He also served as the general secretary of the Eastern Cape Sports Confederation. He was described as a self-effacing intellectual who helped historians document the sporting history of Makhanda.

After a stint as a manager in the municipal manager’s office in 2013, Budaza was promoted to parks and recreation department manager in 2014. Forced to drop out of the University of Fort Hare so that he could work and provide for his family, Budaza managed to return to Rhodes University later in life, completing a BA degree and a postgraduate degree in international relations. He was about to start an MBA when he was murdered. His project of writing a book honouring Black sporting legends of the region has thus been left unfinished.

Sources close to Budaza say corrupt people in the Makana municipality blamed Budaza for stopping a “ghost” workers scam that went on for several years. They added that Budaza never got support from the municipality’s leaders in his efforts to wipe out this corruption.

In 2016, after a two-year investigation, the Hawks arrested the former superintendent of the parks department, Kwanele Ernest Mbangi, and two accomplices, Nohlane Mlonyeni and Kutala Gabavana for running the scam. They were convicted of corruption and money laundering to the value of R31 000 between April 2014 and February 2015 and will be sentenced in the Gqeberha specialised commercial crimes court on 21 June.

However, a confidential source said the ghost worker scheme went on for several years and not only ten months. Another source said almost 100 people were paid as ghost workers. The sources said this potential cash supply of millions of rands for officials running the scheme had now been halted.

A friend in need

Known as a “gentle giant”, Budaza was described as “a rare species, very extraordinary in many ways … an accessible spirit who offered solace to poverty-ridden and troubled souls” by his close friend Ayanda Kota, who leads the UPM. In the days following his death, many people from all walks of life took to social media to describe how Budaza had supported them through troubled times.

One would never find Budaza “blowing hot air and not achieving anything”, said mourner Mpumezo Ngesi at the funeral. Budaza always said the problem in Makhanda was a dearth of selfless and committed leaders who had the political will to end unemployment and poverty. “Jeff was burdened with fighting corruption and injustice of any kind, and he gave his all,” said Ngesi.

Deon de Vos, the mayor of the Dr Beyers Naudé local municipality in Graaff-Reinet and an ANC leader in the Sarah Baartman District, called for anyone who knew who had killed Budaza to clear their conscience and come forward with the information.

Hinting at the problems of debasement, managerial incompetence and general misconduct that saw the ANC’s share of the vote in Makana drop to an all-time low in the 2021 local government elections, De Vos called on ANC leaders to “serve the people with honesty and integrity. We cannot win back the confidence and trust of the people if we cannot even trust each other as leaders,” De Vos said.