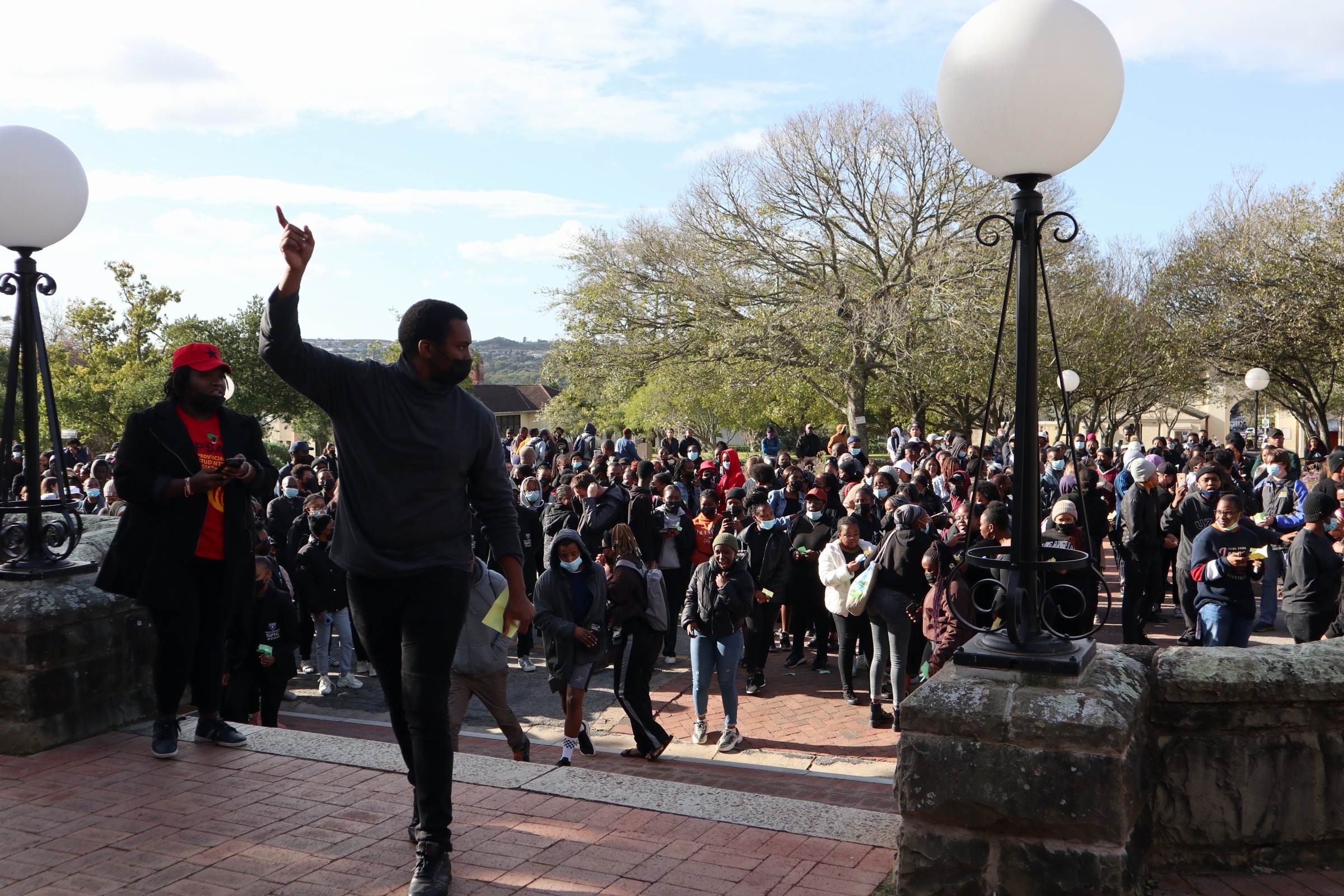 A Rhodes University Mental Health Day vigil, organised in the wake of the alleged suicide of a Pharmacy student, morphed into a protest against the university management on Tuesday 31 May.

The vigil honoured the memory of third-year Bachelor of Pharmacy student Lizo Tshila, who allegedly committed suicide in Cullen Bowles residence on Saturday.

On Monday 30 May, the university confirmed Tshila’s death but did not reveal the cause of his death.

Several students have been using social media platforms to share their grievances about the university’s attitudes towards student mental health concerns. One alleged there was a “mental health crisis at the university” and that concerns about student psycho-social health were being ignored by university management.

Students further alleged that suicides were not adequately acknowledged and addressed by the university.

At the vigil outside the Rhodes Administration Building, students disrupted Vice-Chancellor Sizwe Mabizela and demanded he postpones exams to next week.

They said it was inhumane to continue with exams considering Tshila’s death and widespread mental health challenges faced by students.

“During this mourning period, respect us enough that the exams start on Monday,” one of the protest leaders told Mabizela.

Another student said, “Who is next after this? Am I the next. We’ve been complaining. We’ve been talking. Am I the next victim? When will they see the seriousness of this matter? When we go to the Counselling Centre, no one is helping us. Enough is enough!”

When Mabizela left the disrupted vigil without responding to the students, a few students entered the Admin Building to look for him – but did not find him. The protest was then moved to the Bantu Steve Biko Building. Doors to the building were immediately locked as the students arrived.

SRC President Botlhale Modisaotsile was also interrupted when he tried to calm students after their engagement with the vice-chancellor. “Botlhale, whose side are you on?” students chanted multiple times.

“It’s an SRC with a clipped wing,” one student said. “I respect every member of the SRC, but I do not trust them.”

Following the protest, the university released a statement acknowledging Tshila’s passing but not how he died. The statement said the university had attained permission from Tshila’s family to hold a memorial service for Lizo, who will be buried on Saturday, 4 June.

The statement reassured students of its commitment to deal with mental health challenges. “Incidents such as this one affect people in different ways, and as a result, the University has put in place the measures to support our staff and students during this stressful time,” the statement said.

It listed the various ways in which the university plans to offer counselling services to students:

The statement did not say anything about the possible postponement of exams.