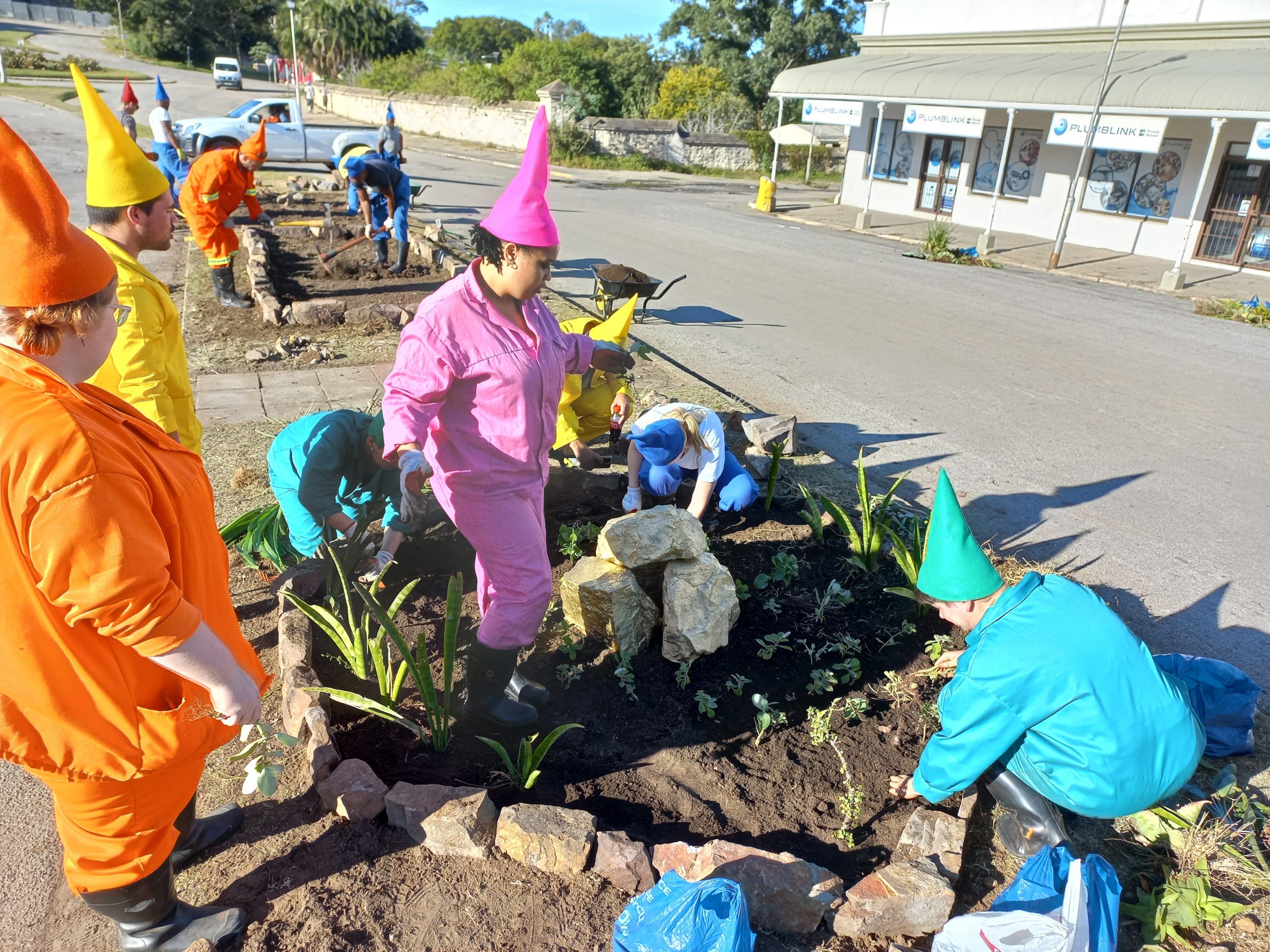 Gavin Krastin, 2021 Standard Bank Young Artist for Performance Art at the National Arts Festival, and a team of ‘queer gnomes’ have embarked on a series of good deeds to uplift the town for his work 12 Labours – a celebration of the modern heroes who activate civic works.

Krastin, is an artist, curator and educator working predominantly in live art performances. He earned a Master of Arts Degree in choreography and performance from Rhodes University’s Department of Drama and is immersed in the professional performance art scene in South Africa and abroad. From 2013 he lectured at UCT’s Centre for Theatre, Dance and Performance Studies, and in 2018 joined his alma mater, Rhodes University (or the University Currently Known as Rhodes), as a full-time lecturer.

I met with Gavin in mid-May to ask three questions and discuss his answers, which I’ve tried to synopsize for publication. Any fault or misunderstanding, then, is my own.

aMan Bloom: The work you’re presenting at this year’s Festival, The 12 Labours of Hercules, has many elements. (a) Can you give me a verbal glimpse of it, and (b) Can you use as an example the volunteer activity here in Makhanda: people clearing street gutters of overgrowth?

Gavin Krastin: Well, the work is loosely inspired by the twelve labours of Hercules, but I very much try to queer or subvert it. Labour needs defining, to include those out of work or over-laboured or artists not considered labourers. So, we highlight the notion of gnomes or elves instead. In those five hours, we’re all paid the same regardless of the work we engage in since ordinary people are also extraordinary in some way. We’re just fixing the road. Our labours are not just civic but include the metaphysical and personal.

AB:  When you use the word ‘queer’, are you referring to the gay community or anybody totally different from the norm?

GK: Yes, the LBGTIQ, but also anyone who’s just ‘queer’ and wants a better world and realizes that nobody else will serve it up. Someone at odds with a system that needs recalibrating. The power of the small. Fix the road, pick up some litter. We’re not going to save the world, but we did clean up the bus stop or save some succulents…

AB: Contributing to the noumena…

AB: It’s very generous of you…

GK: Well, I have a love-hate relationship with this town. It’s hard watching what’s happened in the last fifteen years, and we don’t want to point fingers without pointing them at ourselves. There’s a lot of anger fueling this generosity, and this is the best way to defuse it. [Chuckles] Instead of drinking ourselves into a coma, we’ll just work ourselves into a coma…  Do something with this energy instead of keeping it to ourselves…

AB: And make it public…share it as something creative and beautiful…

GK: Wherever there are awesome people, there’s an awesome experience. Also, having fun. Queer people like having fun. Singing and dancing just erupt. There’s a cheekiness, a playfulness. This is very consensual fun, and we’re deepening relationships. If art is a vehicle for life, we can’t only travel the good roads. We’ve got to make the roads ourselves.

AB: In all your performances I’ve seen, you confront the audience and encourage them to join you…

AB: You talk about “the queering of space.”  How would you explain this in non-technical terms?

GK: Most spaces are very layered, like an onion, but you often get a dominant reading of that space. I feel that, in certain contexts, excavating those deeper, less visible and non-dominant layers can be an act of queering. So, a bus stop is not just a functional bus stop. Let’s queer it by treating it like a throne…

GK: Perhaps it’s a revelation or restoration. For instance, we’re doing a public garden that’s just a grass bank now. It’s functional in that it separates space, but it has so much potential that if we plant a few succulents, it would convert CO2 or feed a few butterflies. Fine as it is, but if we just cast a bit of glitter over it, we turn it into something else.

So, we go to the colonial graveyard so that the spirit of these colonizers could confront the kind of people they actually wanted to colonize, the coloured and queer and gay, and then we’re going to exorcise them. They couldn’t imagine people like us. Make that layer porous. Decolonization is queering, whether it’s the system or the space. We need to queer things, to recalibrate.

AB: I see what you mean, that ‘queering’ is a proper term for what needs to be done.

I see you using your body as a canvas, sharp objects as your brush and blood as a medium. Is this an appropriate metaphor?

GK: Yes, but not a static or dominant metaphor.

AB: Do you want to amplify it; how did it come about? The motivation; its effect on an audience?

GK: I celebrate the body’s absolute autonomy. Not inflicting harm on anyone else, only myself. It’s a way to describe a sense of immediacy and also of vulnerability, including that of the audience. Naked, honest, and the audience loses their guard.

AB: A way to take you out of being a performer and make you a human being.

GK: Exactly, I find it results in a great sense of I-See-You and You-See-Me. Personal attributes become revealed exchanges. If I push myself, it helps me to push the offer, and I think the audience is more discerning than we think. It would be very different if I were to do this unannounced in public, for example. No frame, no consideration.

AB: You’re not playing a role when you’re performing; you’re playing yourself.

GK: It’s a question of belonging rather than fitting in. Of how you have to shrink yourself to fit in, but it’s actually in the act of expansion that you find yourself belonging, and then can find pleasure.

GK: The last three years have been so sh*t for everyone. I got this pull of instead putting things together, of having fun, of not being a soloist, not being isolated…, a huge yearning for connection, for laughter, like a communal build. Use the matrix of art to bring it together.

I asked several of Gavin’s colleagues and Gavin and myself to describe him in one word, knowing that no one can be encapsulated in one word. But they’re artists…

Previous ArticleRoad safety begins with you, says traffic chief
Next Article Makana parks manager gunned down outside his home