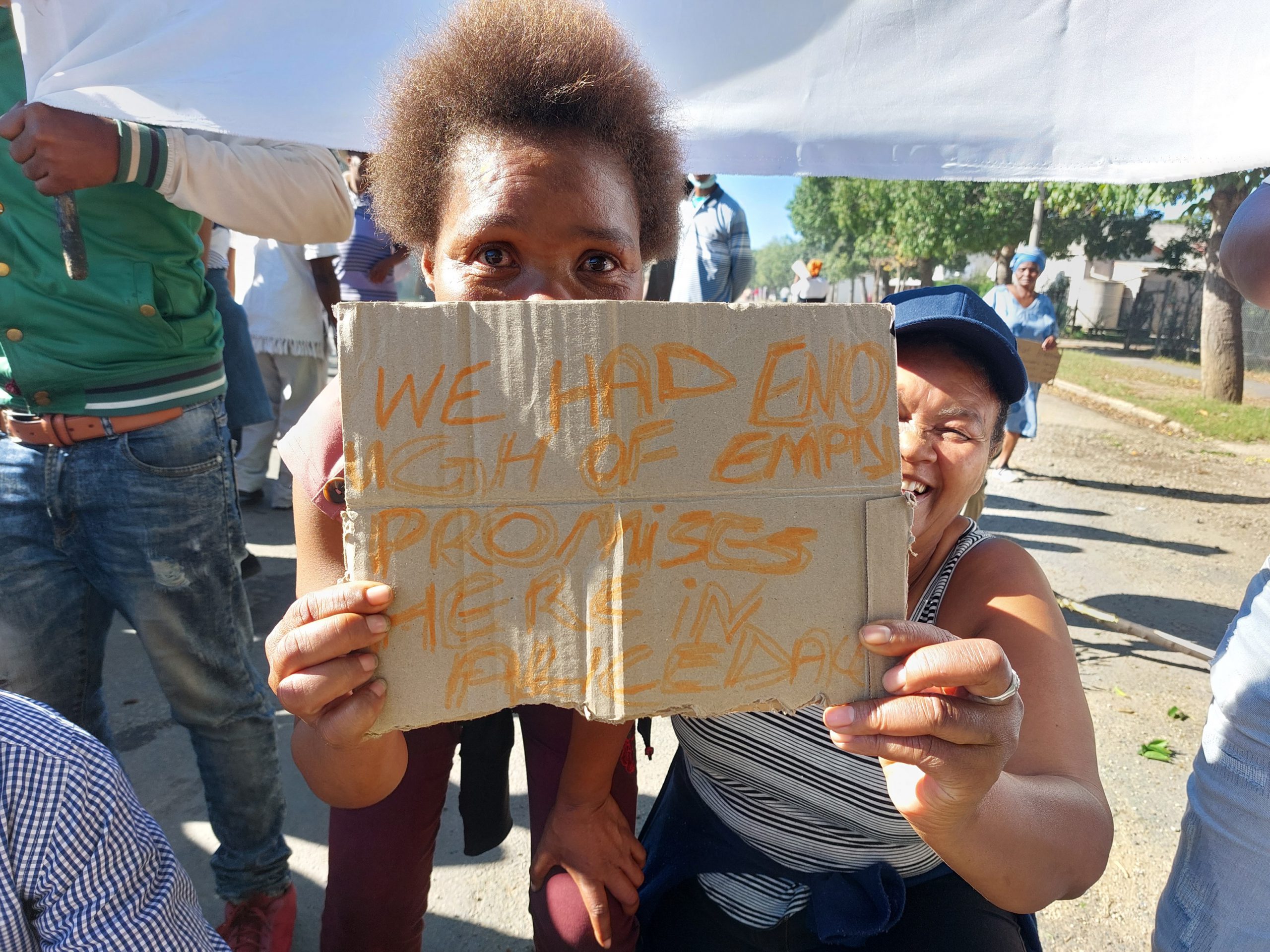 Signs of the times. Protestors on the Alicedale main street on Wednesday, 25 May. Photo: Rod Amner

Anger and frustration over several service delivery failures and delays that have been brewing for weeks reached the boiling point in Alicedale this week as protestors lit barricades in the streets and shut down Makana Municipality offices and the school, the clinic, the library and other offices in the struggling town.

On Wednesday, the protests came to a head following a no-show on Tuesday by Makana Executive Mayor Yandiswa Vara at the Mayoral Imbizo roadshow meeting scheduled for 10 am on Tuesday.

The Mayor countered that she could not attend the Imbizo because the community had shuttered the municipal offices.

Over 100 protestors expressed their intense frustration and anger.

Several weeks ago, Alicedale residents met with Mayor Vara, Speaker Mthuthuzeli Matyumza, Municipal Manager Mappo Mene, and a representative from the Sarah Baartman Department of Human Settlements. In this meeting, the residents complained about the 338 RDP housing plots earmarked for development in the township. The land remains undeveloped.

Resident Athenkosi Bangela said these houses had been earmarked for inclusion in the 2022 Census – but when Census workers arrived in the area, they discovered open fields.

“My question is, where are the houses indicated at Census, and where is the money for that? We are receiving municipal bills for homes that we don’t have and are not there physically,” Bangela said.

Service delivery in Alicedale was “terrible”, Bangela said. “We have tried to communicate that with the Mayor, Speaker, and MM. They always promise us that they will fix the problem – but nothing happens.”

On Wednesday, community members interviewed on the streets said they were angry about the Municipality’s inconsistency and lack of communication.

Bangela said that long before the community hall problem, the Eastern Cape Development Corporation (ECDC) had announced to the community it had allocated R3.9-million for the completion of an unfinished sewage pipeline. But, after several months, the project update had “gone up in dust”, Bangela said.

On Thursday, Municipal Manager Moppe Mene travelled to Alicedale to address the crisis.

He told residents the contractor would appoint a Chief Liasion Officer (CLO) who would be able to hire employees for the building of community halls in Alicedale on Monday.

The police were in full force to control volatility between Makana officials and residents.

The Mene also said he would appoint someone to address the lack of township lighting and liaise with the Department of Human Settlements on Friday, 25 May, about the progress of RDP housing in the beleaguered town.

Most Alicedale residents survive on meagre social grants, while the rest work as labourers on nearby game reserves. It costs them R160 for a return trip to the nearest government offices and retail stores in Makhanda.

Alicedale has no bank and only one ATM. It has a post office, but there are no local branches of the South African Social Security Agency (Sassa) or the Department of Home Affairs. It has two mini-markets but neither a clothing store nor a pharmacy.