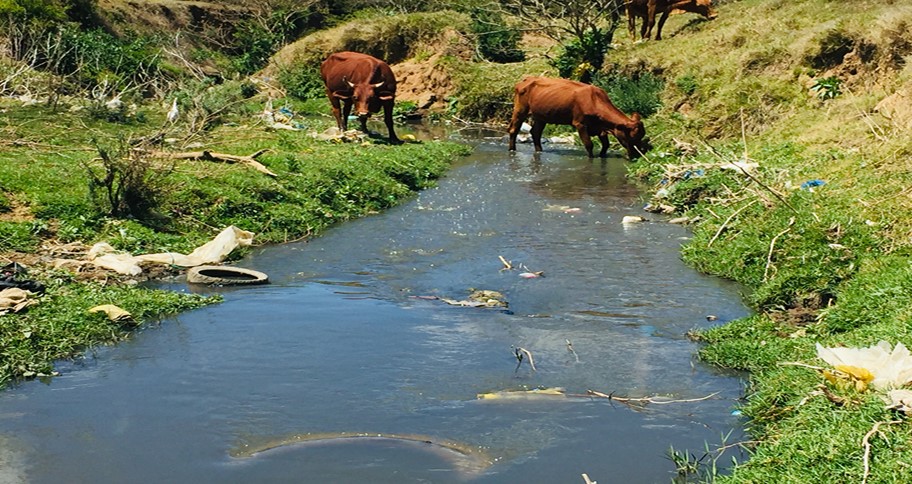 Makana Municipality has scored a stinking 9% in the 2022 Green Drop report benchmark test – down from 62% in 2013 when the last report was released.

Peter Sturrock (MSc Civil Engineering: Water Treatment) said wastewater treatment in Makhanda is “really bad”. For one thing, many sewage pipes and maintenance holes are leaking and overflowing and that “sewerage ends up in the streams as you can see near Cash Build, Matthew Street and towards Fort England hospital.”

The Green Drop report is an incentive-based regulation spearheaded by the Department of Water and Sanitation that monitors wastewater networks and treatment systems.

A wastewater system that achieves over 90% is regarded as excellent, while a score under 31% is considered a dysfunctional system requiring appropriate interventions.

Makana has three assessed wastewater treatment plants – Alicedale, Mayfield and Belmont Valley. Sturrock said that the Belmont Valley Wastewater Treatment Works was especially bad, and the outflow from there also ends in the streams – and ultimately, the Kowie River. Sewage discharge can cause disease if people are exposed to it.

“The poorly-treated wastewater is disposed of into the river, affecting animal and human health. Wastewater is discharged into the Bloukrans River, a source of water for animals (cattle, goats) and irrigation for farms along the river banks.

“The water is used to irrigate crops which are sold to the public for consumption. If poorly treated wastewater is discharged into the Bloukrans, the pathogens in sewage end up in river water and consequently on irrigated crops.

“Animals which drink this polluted water may transfer these diseases to humans when humans consume meat and milk or get exposed to animals’ faecal matter (animal faecal matter is common on the streets of Makhanda).

“Bacteria such as Campylobacteria and Vibrio Cholera can be transmitted from polluted water to humans.

“The rivers are also spiritually and culturally significant – discharging poorly treated wastewater deprives the community of such cultural/spiritual activities and exposes the locals to pathogens when they are exposed to such water,” Chibwe said.

According to the Green Drop report, wastewater systems which failed to achieve the minimum Green Drop target of 31% are placed under regulatory focus.

The regulator requires these municipalities to submit a detailed corrective action plan within 60 days from publishing the Green Drop report.

But, Chibwe says that addressing the challenges highlighted in the report may require more time. “The issues highlighted may require consultations and the development of long-term and short-term solutions. The biggest issue is poor infrastructure, lack of skilled personnel, and poor regulation.”

Makana Municipality has not responded to a request for comment by Grocott’s Mail or whether or not there is a plan to respond to the Department of Water and Sanitation regulatory requirements.

The report shows that ten municipalities – including Makana – and 48 wastewater systems that received Green Drop scores below 31% will be placed under regulator surveillance with the Water Services Act (108 0f 1997).

In addition, these municipalities will be compelled to ring-fence water services grant allocation to rectify/restore wastewater collection and treatment shortcomings identified in this report.

As a mitigation strategy, the report states that the national government will ensure that grant funding is allocated to restore the functionality of existing wastewater infrastructure according to the findings of this report.

This includes the determination of ‘a very rough order of estimates’ (VROOM), which estimates the funding required to restore existing infrastructure to its original design capacity and operations by addressing civil, mechanical, and electrical defects.

The VROOM was done to estimate the capital requirement for the functionality restoration drive. This will be effected with the support of the National Treasury. Makhanda has a VROOM of about R8.4-million.