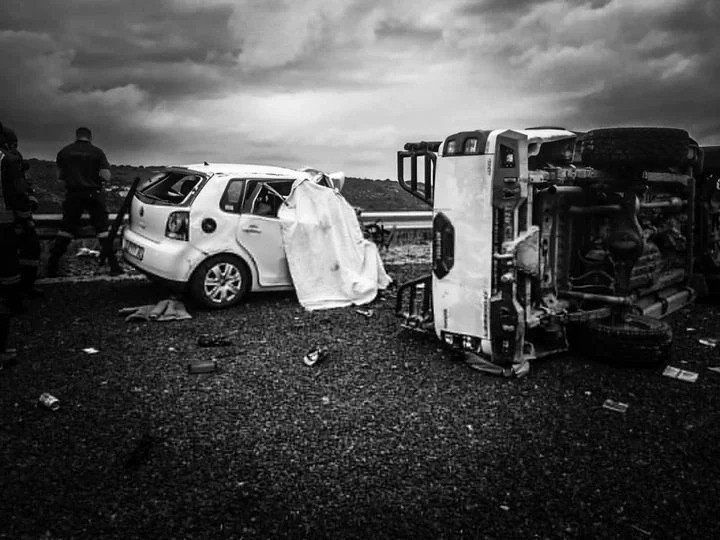 One of the two horror car accidents that took place just outside Makhanda on Thursday and Friday. Photo: Facebook, Unathi Binqose

Twelve people died in two separate car accidents on the N2 outside Makhanda on Thursday and Friday.

In the first accident on Thursday, four people, including a three-year-old boy, died when a Polo Vivo and a Toyota LDV collided head-on.

Department of Transport spokesperson Unathi Binqose said that the Polo was travelling from Makhanda, and all three occupants, the little boy and two women died at the scene.

“The Toyota LDV was travelling from the Peddie direction and had six occupants, all males allegedly from a local farm. All three in the Polo died, and a passenger from the bakkie also perished on the scene,” he said.

“The injured five occupants from the Toyota LDV were rushed to hospital.”

In a separate accident on Friday, May 20, an Opel Corsa Lite with six occupants inside, two men, two women and two children, collided with a Toyota Quantum delivery vehicle with two occupants on the N2 just outside Makhanda at approximately 5.30 pm.

All eight people involved, including a three-year-old boy and a nine-year-old girl from the Corsa, died in the accident. Seven passed away on the scene, while one of the men in the LDV died upon arrival at Settler’s Hospital.

Previous ArticleLECTURE: How sexuality education fails SA youth
Next Article How to start getting over a breakup