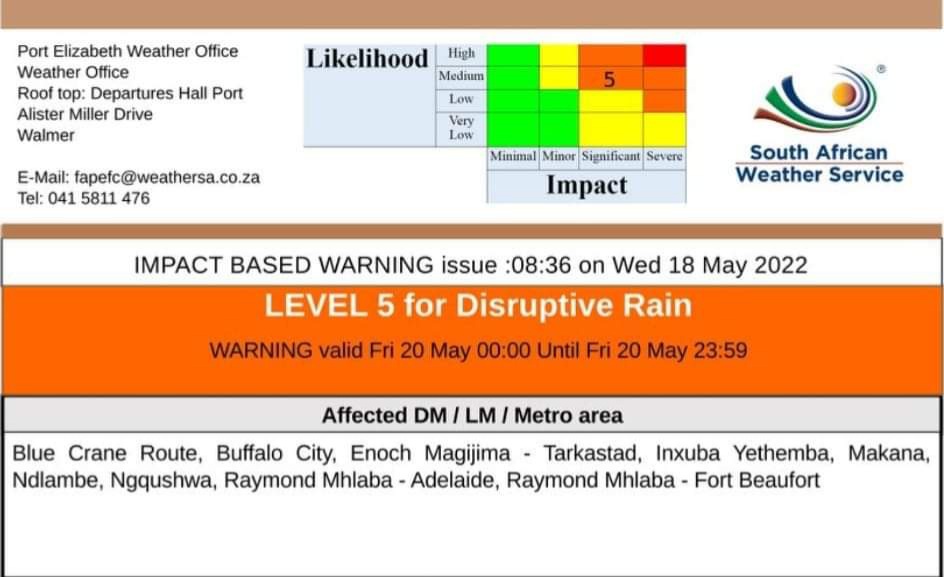 The South African Weather Service has issued a warning for level 5 disruptive rain from Friday, 20 May.

Potential impacts as identified by the warning include: “Flooding of roads, formal/informal settlements, low-lying bridges and areas, and infrastructure is expected. Disruptions to traffic and municipal services can be expected. Dangerous driving conditions are possible.”

The South African Weather Service has instructed the following: “Listen for regular weather updates via radio and social media. Postpone travel arrangements until it is safer to travel. Avoid crossing rivers and swollen streams. Monitor the weather conditions and, if need be, identify areas to store valuable items from floodwater safely.”

On Sunday, 5 December 2021, Makhanda experienced unexpected heavy rain that led to flooding in many areas. Chief Fire Officer William Welkom then reported that the Fire Department received “calls from trees having fallen, roads flooding, houses filling up with water, and even a wall collapsing”.

The Fire Department was overwhelmed with several calls, and after several had come through, they flagged this with the Sarah Baartman District’s Disaster Centre.

While Welkom assured Grocott’s Mail that “the municipality has a disaster management plan”, Makhanda currently does not have a Disaster Management office. Disasters are presently managed at the district level only.

Makana Municipality communications officer Anele Mjekula said that “Disaster Management is a District function. Makana relies on the Manager of the District and the teams from Fire and Traffic Departments in supporting that function. The alert was issued earlier this week and the District is aware of that information as well as the Makana LM Director for Community Services.”

Welkom warned in December 2021 that the stormwater channels needed to remain clean and clear “because it can assist with the flow of water, not just the big channels like the driffie in Fitzroy Street but also the smaller channels and stormwater drains.”

The municipality was asked about intentions to address the debris build-up and clearing the stormwater draining system. Mjekula confirmed that there is a plan to clean the system but that to do so, “The Council has to make the necessary decisions on financing.”

He also confirmed that the drainage system had been neglected “due to less maintenance, drought, [and]funding to improve such”.

Some improvements have recently been made through local community members who have been clearing some of the channels. Still, to be prepared for a weather warning such as the one issued for Friday, 20 May 2022, this work needs to be done at scale and regularly maintained.

Further comment on the readiness of Makhanda for Friday 20 May’s anticipated disruptive rains has been requested. As we receive a response, we will update this article.