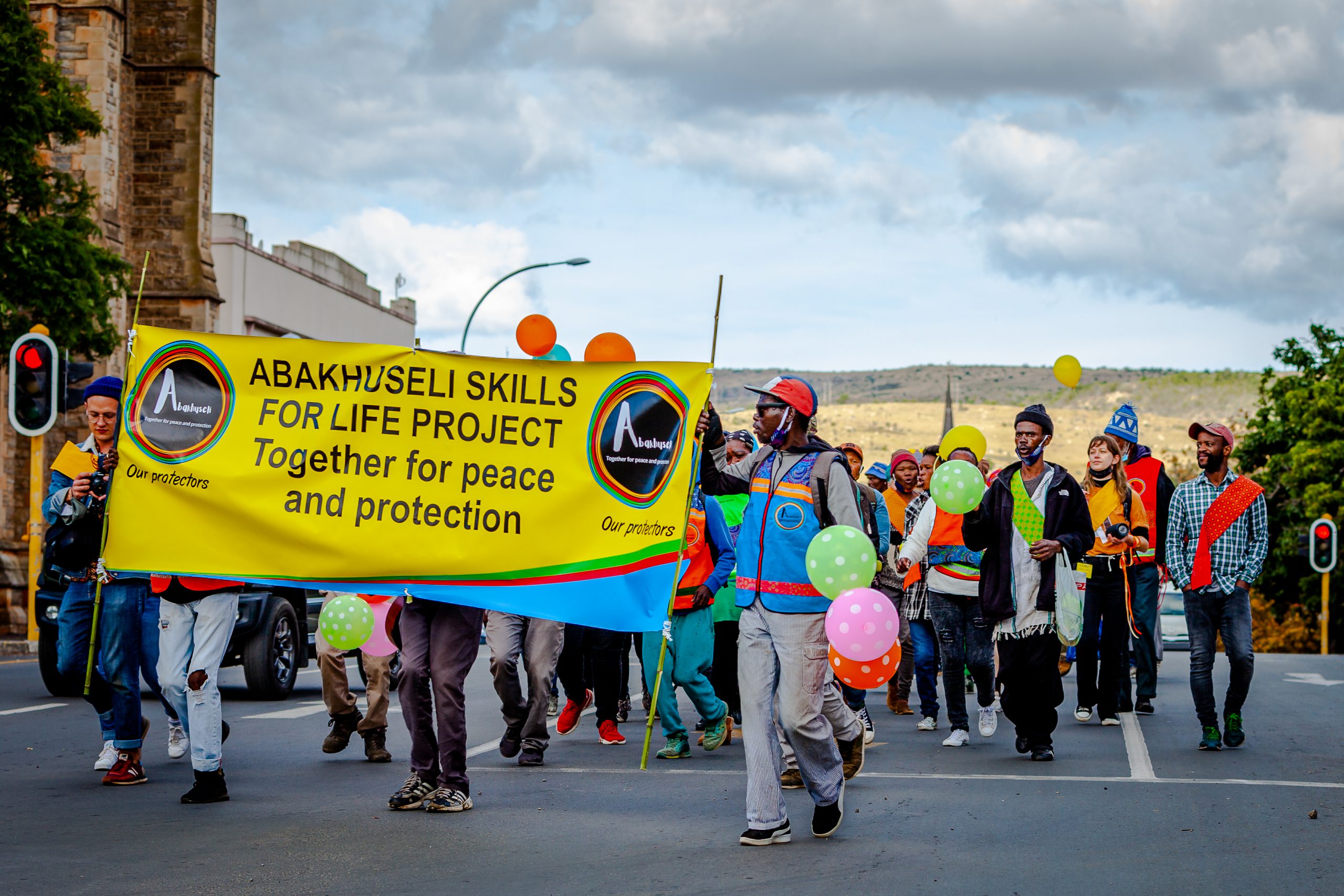 The Abakhulisi Skills for life Project parade through the city centre on Saturday 14 May. Photo: Atang Matiea

The Abakhuseli Skills for Life Project provides an empowering and dignified space for community members who assist and protect motorists – otherwise known as car guards – to express themselves, develop skills, and build autonomy and self-development. Abakhuseli members want to be differentiated from the criminals and pretenders on the street and be recognised for their dedication to their occupation, themselves, and this community. SAM BABAYA reports from the joyous launch of this uniquely Makhandan empowerment project on the weekend.

Uncontrollable smiles erupted on the faces of Abakhuseli Skills for Life members on Saturday, 14 May, during the launch of the organisation’s launch party, which included a celebratory, traffic-police-escorted parade through the city. The contagious passion of the Abakhuseli members infected all who attended the event.

“Together for Peace and Protection” is the mantra that guides Abakhuseli. It is dedicated to empowering and connecting community members who have chosen to assist and protect motorists (or car guards).

Abakhuseli was born out of the 2020 hard lockdown when car guards lost their income overnight. Relationships were developed during the Makhanda Circle of Unity’s food efforts to distribute food parcels and ‘skills for life’ pamphlets. These interactions became the catalyst for developing the Abakuseli Skills for Life Project.

The project strives for inclusivity and partnership, which is why collaboration between members and facilitators determines the direction. Every decision is backed up by group discussion.

This team of community members is creating a foundation for growth and development in Makhanda. Abakhuseli is catalysing an entrepreneurial mindset into our community by creating a space for education and inspiration. The hard-working individuals of Abakhuseli display relentless hope and determination.

Members meet every second week to discuss ways to improve their car-guarding careers and participate in workshops to promote personal and professional growth. Members sign an attendance form and find a space to sit amongst their colleagues.

The meeting is opened with a prayer recited by one of the members, and everyone bows their head in respect and gratitude for the community of care they have created. The meetings follow a clear agenda which has been prepared beforehand.

The meetings are either general feedback and reports or workshops. The workshops relate to skills development or discussions to induce more perspective, growth and learning in the community of car guards attending.

In a recently observed meeting, the members were split up into smaller groups to answer questions about the changes members would like to see in themselves, their relationships with their customers, and the project’s effects.

Generating more respect and creating better communication between each other and their customers was a common theme. The Abakhuseli members feel that their new uniforms with the logo and their name tags will allow them to look more professional. This will ensure customers view them in a more dignified light.

Name tags may help dissolve the barrier of othering by representing the car guard as an individual rather than a boxed-in character whose identity has already been decided. They want customers to recognise and trust them. “The customers must understand that we are their protectors,” said Abakuseli member Thulani Nkwinti.

Members wanted to be differentiated from the criminals and pretenders on the street and recognised for their dedication to their occupation, themselves, and this community.

“We are threatened by those who pretend to be car guards,” said Abakhuseli member Liziwe Skepile. This is one of the biggest daily work challenges car guards in Makhanda face. These posers have been known to bully both car guards and motorists alike and give car guards a bad reputation. The hope is that Abakhuseli uniforms will be seen as beacons of trust and safety.

Abakhuseli provides a space for community members to be heard, seen and respected. Car guards and others have a safe space to voice their concerns and opinions and be heard seriously and constructively. These individuals are volunteering their time to learn and discipline themselves. They are sacrificing work hours to come to these meetings to work at bettering their profession for themselves and the community.

The attitude of “everybody is welcome” means that everyone feels included in this space.
Abakhuseli is open to all, but members must attend three sessions to get a name tag to wear on duty and must attend five sessions to qualify for an Abakhuseli car guard uniform.

Abakhuseli hopes this will be seen as a badge of trust and assurance by the community. They hope this will get the ball rolling for good relations between car guards and motorists.

Pamela Matu makes the custom-made shweshwe uniforms of 9 and 3/4s uniquely designed for each individual with their chosen name.

Abakhuseli has received support from local businesses and community partners through this process. Red Café is a proud Abakhuseli supporter, and smaller meetings are often held at their establishment.

Other community partners include Food4Futures, a local NPO which provides food parcels for those who cannot feed themselves. This is funded by donations and the purchase of food parcel vouchers. Food4Future provides commitment food parcels for members of Abakhuseli who have attended at least three meetings.

Ten Abakhuseli members have been asked to work at the Foods 4 Futures auction event, further evidence of the growing partnership.

The next step Abakhuseli plans to take is registering as a formal NPO to expand their project and reach more people. They plan to raise funds for empowerment and skills development training that caters to the needs of their members.

This ambitious group aims for radical change in the culture of the Makhanda community. They are creating a mind-shift shift away from bias and fear toward a culture of respect, appreciation and understanding between different community members.