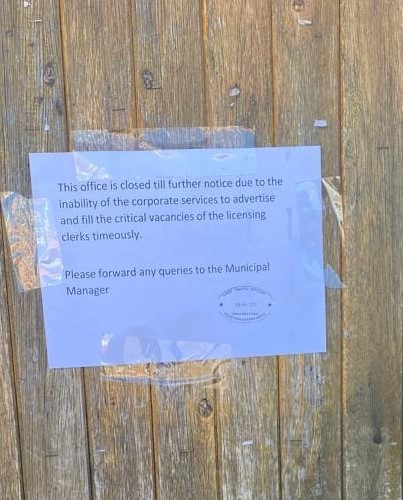 The 'notice' on the door of the Traffic Department recently. The department has subsequently reopened. Photo: Tim Bull

Makana Traffic Department clerks are back at their stations after a rescue agreement was struck with the Makana Council to retain their services, according to Makana Traffic chief Coenraad Hanekom.

The department was closed recently because several cashiers who had been ‘temporarily loaned’ to them by the Makana Municipality were redeployed.

Hanekom said he sent 14 reminders to the Makana human resources department over five months to advertise and fill the posts.

The clerical posts have now been advertised. The closing date for applications is 20 May 2022.

However, after they are hired, the Traffic Department will need about three months to train and evaluate the recruits, Hanekom said.

In addition to the closures, frustrated motorists have complained that the National Administration Traffic Information System (eNATIS) is often offline.

Hanekom said one reason the eNATIS system had been down was due to power outages. The Traffic Department is “never warned about power-downs except load shedding”, he said.

Also, the Makana Traffic Department cannot operate the system – administered by the Road Traffic Management Corporation (RTMC) in Midrand – when it is offline, he said.

The Traffic Department could not communicate to motorists how long it would take to be back online since the service provider failed to inform them. “If we are informed, we are not told how long it will take to get back online, he said.

Hanekom confirmed on Tuesday 10 May that the eNATIS system was back online.

Hanekom said that there were no alternative arrangements for driver’s license renewals when the department’s system is offline.

He said delays in the production of driver’s licenses had been widely reported on national news channels. He urged drivers to renew their licences on time. “Drivers should never wait to the last minute before renewing their licences,” he said.

Drivers could renew their licences at any local authority to ease the pressure on the office. “There is enormous pressure on this office as many PE drivers come here to renew,” he said.

Responding to residents’ allegations that there had been little to no visible Traffic Police presence in Makhanda in 2022, Hanekom also said that the department had limited resources concerning the deployment of Traffic Police in Makhanda. He said the department currently had seven traffic officers, divided into two shifts, making it difficult to cover the whole city.

“There are challenges with equipment and overtime,” he said.