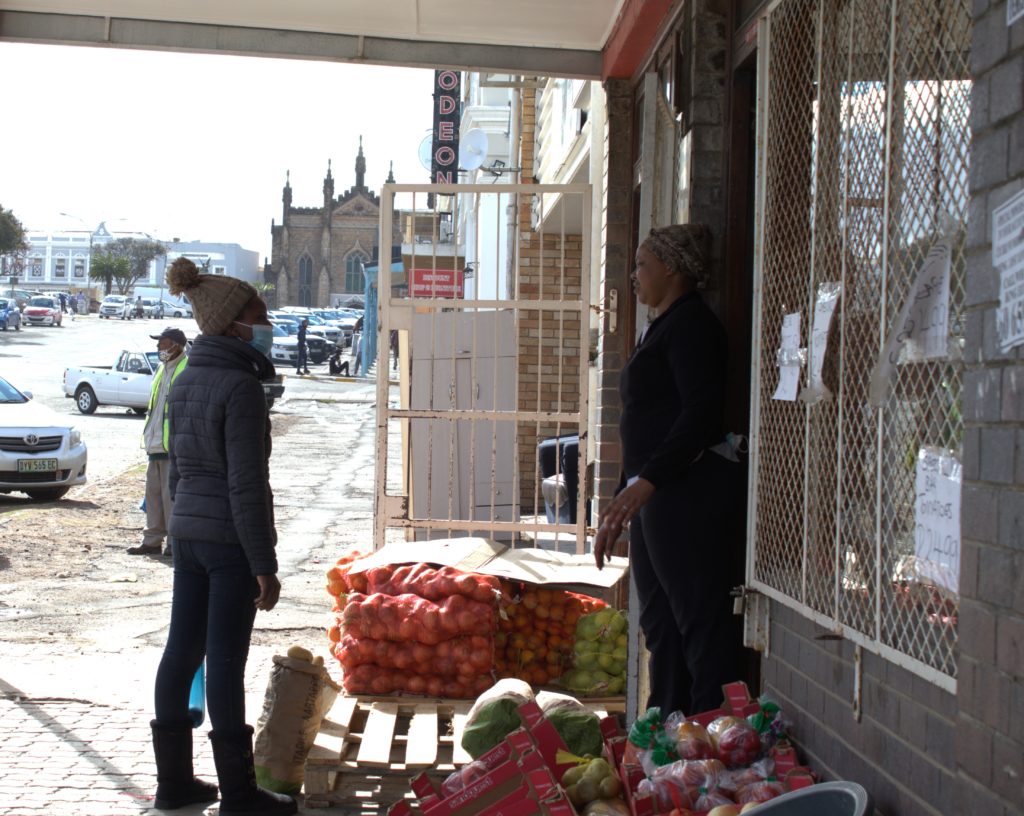 Street traders and small entrepreneurs constitute a significant segment of the local economy – but, they were hit hard by the Covid-19 lockdowns. MAKWENA MANAKA interviewed local vendors, store owners and entrepreneurs to find out how their businesses are faring in a still-bleak economic climate.

Fresh fruit and veg are always in demand

Weston Geza, 45, sells fruits and vegetables on Beaufort Street beside the SAPS station. He started his business six years ago and currently employs four workers.

Starting a business was not in Geza’s initial plans, but he decided to do so after unsuccessful attempts at finding employment. “After looking for a long time for work, I decided to start for myself.”

“There are a lot of African farmers who the government gave land. They are specialising mainly in beetroot, cauliflower, spinach and cabbage.”

Geza said it took a while for his business to take off, and his supply of fruits and vegetables would rot. However, as time progressed, he became known in the area and developed trust with customers.

Although Geza was hit hard by Covid-19 lockdowns, he did not seek assistance from the government to sustain his business.  Instead, he opted to wait for the relaxation of the regulations and attain a trading permit at Makana Municipality.

“I’ve heard about those opportunities, but being a foreign national, although legally in the country, I thought it would be a long process to start looking for money and all the help I can get from the government. So I just forgot about those things and just soldiered on.”

“But, I think the government should create more employment even under such difficult circumstances.”

Although informal businesses were allowed to operate earlier than most other sectors, Geza says sales declined as fewer customers had money.

Unlike bigger stores in Makhanda, his fruits and vegetables are not preserved by fridges. They are locally sourced and sold daily to prevent having excess produce that goes foul.

Nothando Qude is a mother of five children and has run her fruit and vegetable business on Beaufort Street for 30 years.

She buys her supplies from foreign-owned stores in the area. Qude lamented that the Covid-19 pandemic and its impact on the economy resulted in fewer customers.

“There’s no business; people don’t have money as they’re unemployed. We’re suffering. You can sit the whole afternoon without selling anything.”

Qude says she has attended multiple meetings at City Hall but could not get assistance to uplift her business. She was unaware of the government grants for informal businesses of up to R30 000 to sustain and propel their businesses revealed by the Department of Economic Development, Environmental Affairs and Tourism (DEDEAT) at an information session for informal businesses last year.

“I didn’t know about the meeting at town hall. We need someone who will speak for us. Some people say they stand for us, but we hardly see them.”

Qude wishes for more effective communication when business programmes get introduced. She continues to rely on customers travelling in and out of Makhanda.

Dianna Chibvongodze, 35, is the manager at Grahamstown Fruit and Veg, located at Bathurst Street in the Makhanda CBD.

She and her partner started the business in a passage at a store that sells second-hand furniture and, in 2017, relocated to Bathurst Street to expand their business.

Grahamstown Fruit and Veg has seen significant growth and currently boasts 14 employees. But, Chibvongodze says the development of the business has produced new challenges in delivery demands.

“You know when you’re starting something, you need more labour and more transport for delivering.”

Grahamstown Fruit and Veg did not get spared from a decline in sales due to the lockdowns. Chibvongodze said the store survived without any assistance.

Andiswa Stofu, 30, is a self-taught creative entrepreneur from Extension 9 in Makhanda.

In 2015 Andiswa was invited by Rhodes University’s Enactus student society – a global non-profit and community of student, academic, and business leaders promoting socio-entrepreneurship – to start her own soap business Enhanced Aloes.

“Enactus had a promo competition. I looked on YouTube and I went with it.”

Andiswa watched YouTube tutorials to learn how soap is made and experimented with making her soap. She uses several products, including essential oils like coconut oil and clay, to produce her soap blend. A chemistry expert assisted her at Rhodes’ Pharmacy Department to ensure that her soap was suitable for human use.

Although Andiswa is a part-time domestic worker, she pays great attention to ensuring that her products attract customers’ eyes at local markets.

She has expanded her business into making shower gels and jewellery using beads and artistically using everyday items such as keys.

When asked about what she attributes to her creativity, Andiswa says she was born creative. “It was given to me by the grace of God.”

She was introduced to shweshwe, a printed and dyed cotton fabric, in 2019 and used it to create book covers and dresses.

“Everybody needs a counter book. The wives want it for a shopping list, and the husband wants to write their tools in there. My dad has one to keep a record of his goats – when they were born and all the details.”

She has a supplier located in Pretoria with an online store where she orders the raw soap in bulk to cut costs. Andiswa says her soaps sell like hotcakes.

She initially used plastic to package her soaps but switched to brown wrapping paper to prevent melting due to heat.

She refers to her marketing style as “ambush selling”, whereby she mainly approaches people in Makhanda west markets and introduces them to her products.

“My customers like that it’s organic, and the price is not bad.”

Andiswa relies on local markets such as the Albany Market club to sell her products. She would like to expand to markets in Bathurst but says the travel expenses are too high.

Andiswa’s business is registered as a proprietary company (PTY) at the Companies and Intellectual Property Commission (CIPC) and listed in the Makana Municipality Local Economic Development (LED) database. She has, however, not been contacted by the LED office for opportunities to grow her business.

The lockdowns did not spare her business as she could not sell her products. Some of her soap melted, and she was forced to give them away for free to residents in her community.

“It hit me bad. It gave me time to do most of the stuff but financially, it was straining. It was a very dark place. I wouldn’t go back there. At least the markets are starting to pick up again.”

Enhanced Aloes currently has a Facebook page, but Andiswa aims to expand her online presence to other social media platforms and a live website. She has high hopes for her business exploits and, as a youth herself, believes more needs to be done to curb the youth unemployment plaguing Makhanda.

“My long-term goal is to have a business located at Joza Mall and employ 50 youths. If you’re young and creative and want a place to showcase your ability, you should come. I want businesses from town to come here and collect items for shelves at their stores,” she says.

Previous ArticleHave the cornerstones of local democracy broken down?
Next Article The mayoral imbizo roadshow