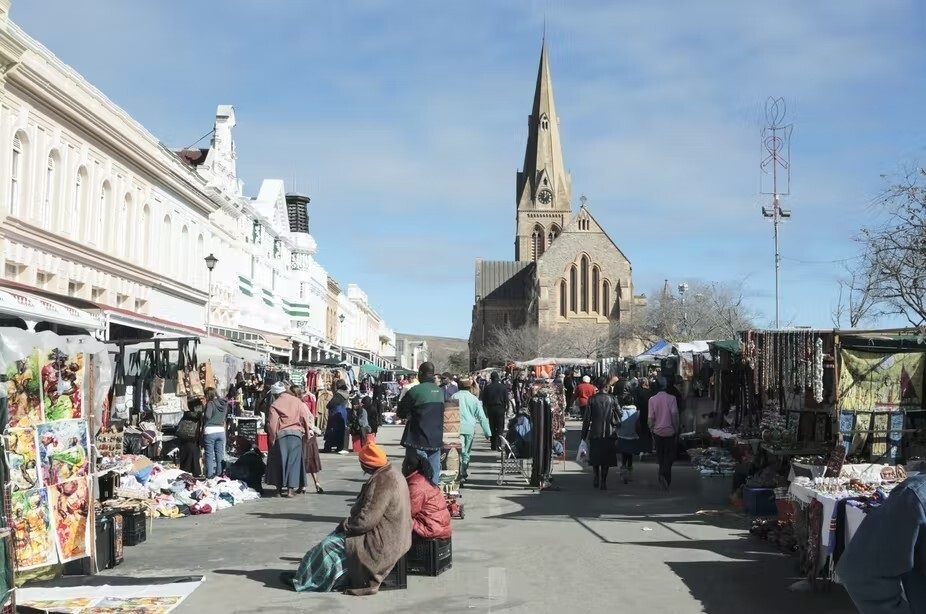 Street traders on High Street during the National Arts Festival.

The South African informal economy accounts for 17% of employment. Street trading is the largest. Street traders are scattered around the many corners of the country’s towns and cities. They sell a vast range of products.

Despite their significant role in economic and social development, street traders continue to be harassed by municipal officials. They face sustained forceful evictions, continued confiscation of their goods, and the soliciting of bribes by police officials. These actions indicate the repressive relationship between the street traders and local government in South Africa.

The justification is often that street trading is unruly, chaotic, and disruptive, driving municipal authorities to remove and relocate street traders forcefully.

The issue has ended up before the country’s courts, including the Constitutional Court. The cases have included the unlawful confiscation of goods belonging to traders, the removal of street traders from their stalls and their arrest. But as the Constitutional Court has pointed out, the ability of people to earn money and support themselves and their families is an essential component of the right to human dignity.

Local economic development is a process through which municipal authorities, community-based organisations, and local communities stimulate economic activity to create employment. It involves building on the resources of a local area. These include human, capital and institutional resources.

South Africa’s constitution mandates municipalities to drive local social and economic development. The mandate is fleshed out in the White Paper on Local Government and the Municipal Systems Act.

This effectively commands municipalities to forge relationships that can help them improve the livelihood of local communities. It also empowers municipalities to use legislative and other means to create environments that enable formal and informal businesses to thrive.

Local economic development can therefore be a tool for facilitating the growth of local economies, creating employment, and reducing poverty. And street trading can arguably help achieve these objectives. More so with rising unemployment in South Africa.

In addition, street trading is widely regarded as a “safety net” against poverty.

We argue that the principles, values, rights and duties embedded in the Constitution are directly relevant to the advancement of street trading as a tool for local economic development.

The principle of constitutionalism, for instance, states that the regulatory powers, duties, and functions of municipalities are derived from and also limited by the Constitution.

This means that all the bylaws that municipalities use to regulate street trading must comply with the Constitution. In practical terms, the conduct of every municipal official must always be informed by the Constitution.

But a review of some of the actions against street traders contradicts the values, rights and duties set out in the Constitution. Various high and constitutional court rulings have confirmed this.

Constitutionalism suggests that city authorities must balance the development and enforcement of regulatory instruments such as bylaws or municipal policies against the rights of street traders. These include the right to dignity, freedom of trade and occupation, property rights, and access to information and the courts. These rights are reinforced by the constitutional principles of legality, human dignity and equality.

Constitutionalism also requires that city authorities ensure that their powers and duties in regulating the informal sector are aligned with established constitutional principles. These include legality and the rule of law.

Our research shows merit in adopting a constitutional law approach to street trading. The constitutional compass would allow the sector to thrive. In turn, this would help strengthen local economies.

For the authorities, the constitutional compass serves as a barometer for the conduct of officials.

In our view, street traders would be guaranteed a range of constitutional rights if local authorities complied with the dictates of the Constitution. This would enhance their ability to trade and help promote local economic development.

On the other hand, street traders should respect local laws and constitutionally compliant policies. This is in line with the governing powers of municipalities.

This article was first published in The Conversation Africa.

Oliver Fuo is a Professor of Law at North-West University