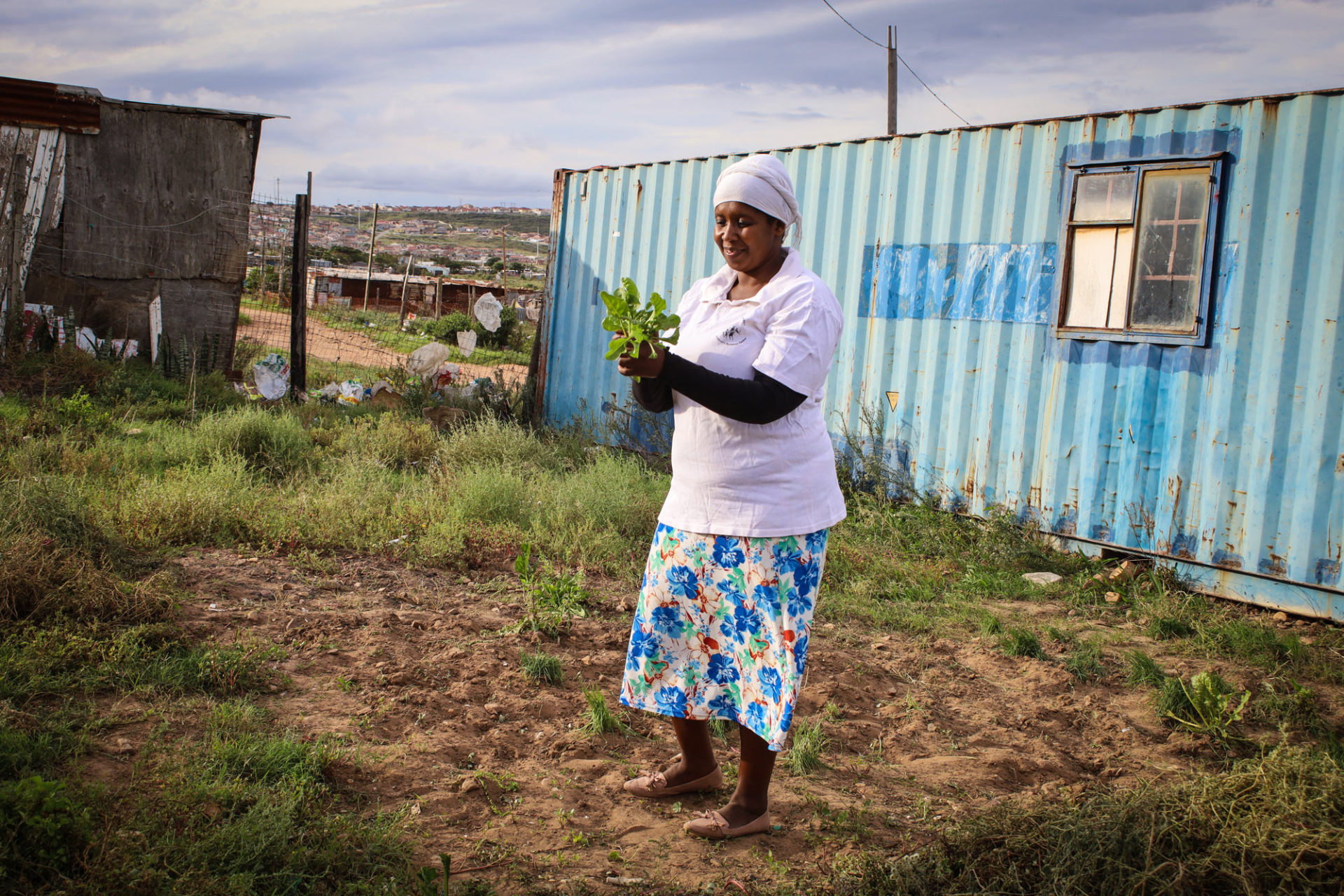 Felicia Lethese, coordinator of the Children’s Movement at Riemvasmaak in Bethelsdorp, Gqeberha, holds spinach from what was a thriving garden until the taps ran dry and water became scarce. Photo: Bonile Bam

Starvation and not just hunger and malnutrition has become a feature of life for many impoverished kids. They need solutions for the long term that go beyond charity. New Frame’s ANNA MAJAVU reports.

A new campaign against child starvation will hold public hearings on children affected by malnutrition and take the government to the Constitutional Court for violating children’s rights to food and life.

“Our kids are in a terrible state,” said CRC founder Marcus Solomon, 83. “Malnutrition is slow violence, and stunted children are unable to learn. This campaign aims to get mass support for children’s rights to food, a basic income grant, and a whole environment. We are asking as many people from every aspect of life to join.”

The latest figures from the University of Cape Town’s Children’s Institute from 2020 indicated that about four million children in South Africa had stunted growth because of malnutrition. Another 10 million went hungry every day.

Solomon founded the CRC in the 1970s out of the community struggles in Mitchells Plain. After ten years as a political prisoner, he had just been released from Robben Island. Since then, the centre has also launched the Children’s Movement, which has about 20 000 child members across the country, and the Girl Child Movement, which opposes the culture of female subservience and male dominance by uniting girls to organise and solve their problems.

The new campaign aims to use the organising successes of the past to amplify children’s agency. “This is not a webinar campaign. The basis is the mothers and children in the streets,” said Solomon.

The CRC participated in a six-year-long class action against bread price-fixing by a cartel comprising Pioneer Foods, Tiger Brands and Premier Foods. It eventually resulted in an out-of-court settlement. The organisation learnt that campaigns must be mass-based and not reliant on the courts. However, it will head to court when necessary.

“Children have agency, and they can be active participants in building a new world if they have an environment conducive to the growth of their intellect, hearts, souls and bodies – food, arts, culture, sports and more,” said Solomon.

The campaign hopes that a Constitutional Court case will result in government departments being prosecuted whenever a child dies of malnutrition because the government is not fulfilling its constitutional mandate to implement interventions to eliminate hunger among children.

“There must be justice for these children and their families. The government must be held accountable,” said Ivor Baatjes, an interim campaign committee member and director of the Centre for Integrated Post-School Education and Training (Cipset) at Nelson Mandela University. “We don’t even know if the families get any support when children die of hunger.”

The campaign believes that the profit-driven food industry, with its penchant for increasing food prices and its oversupply of non-nutritious processed foods to impoverished communities, is part of the malnutrition problem. And, it says, the threat of climate change further creates the need to overhaul the way food is produced, sold and distributed.

It plans to link the estimated thousands of local community food gardens across the country and work with grassroots organisations to set up more such projects that government, business and the public must support. In the Eastern Cape, Cipset already works with 164 community gardeners across Gqeberha, supplying seedlings, training and equipment.

“Soup kitchens are a short-term solution,” said Baatjes. “We must give communities much greater control over their food, not just by donating seeds to plant, but by establishing food systems where communities have access to land, support, and produce and distribute food so that people have food regularly.”

The other aims of the campaign are to secure a basic income grant for adults, an increase in the child support grant and the right to work for adults.

Doing it for themselves

Felicia Lethese, 42, CRC coordinator for Bethelsdorp, about 20km from Gqeberha, has been trying to put the campaign goals into practice for years. She lives and works in the town’s impoverished Riemvasmaak shack settlement, established in 2007. There are only six taps for about 500 people, and one has been broken for the past four years. The residents have no flushing toilets and use the bucket system, with the municipality removing the buckets of faeces only once a week.

The Children’s Movement has 1 000 young members in the Bethelsdorp area and runs a weekly food kitchen. It also conducts anti-bullying, anti-fighting and anti-drug workshops in schools.

The area’s children started two gardens using a spade without a handle to dig the soil and plant seeds. “We had no fertiliser, watering cans, water storage tanks or garden equipment,” said Lethese. “Yet we managed to use this broken spade to set up our gardens because our slogan is ‘we use what we have’.”

The children also sew and sell “wonder bags” – energy-saving insulated cloth bags that continue to cook food in a pot after being taken off the stove.

Lethese is proud of the children’s agency and critical thinking skills, but the projects struggle to survive without substantial support from a mass campaign and the government. The two vegetable gardens were once flourishing, but today they are almost barren because water in Riemvasmaak is cut off for up to four days at a time. When the water returns to the few working taps, it is sometimes only a trickle, and the queues of residents waiting to fill buckets are reluctant to allow anyone to use the scarce liquid to water plants.

The soup kitchen also opens only once a week when enough donations are received. This is not always enough to prevent malnutrition, and Lethese often buys ingredients with her stipend.

Solomon says feeding initiatives like these, many of which were started by working-class people during the Covid-19 lockdowns, cannot continue to rely on goodwill and a charity response. “Without a coordinated national response, children are paying with their lives.

“We cannot continue to be the passive victims of violence of poverty, gender-based violence and more. The cliché that says children are the future is meaningless. They cannot have a future unless they have a now,” he said.