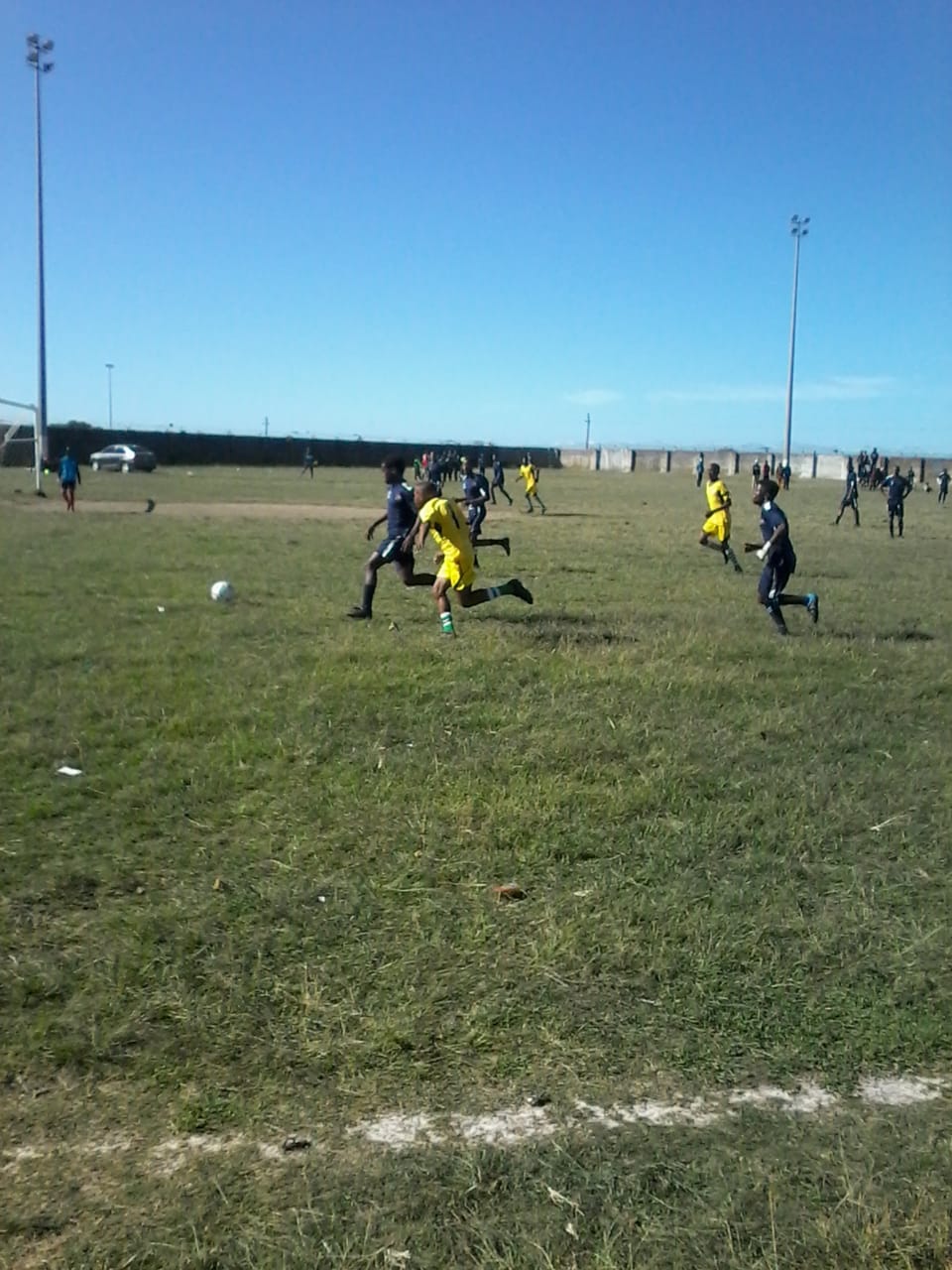 Sophia Young Stars in navy against Eagles in yellow in their semifinal clash.

All roads led to JD Dlepu stadium this past weekend for the Makana LFA U18 tournament. All teams looked very sharp and prepared for this event, and the margins in the final scores were not significant.

Some blazing hot encounters got the huge crowd on their feet. The teams knocked each other out as early as Saturday morning, and we were only left with four teams on Monday.

In the first semi-final, City Pirates fought very hard to beat the on-form Black Stars 2-1. In the other semi-final, defending champions, Sophia Young Stars, locked horns with Young Eagles to revive their rivalry in the youth competition. Both teams had registered two teams for this tournament as they both boast a high number of U18s.

Eagles’ first team was disqualified against African Spears for failing to produce proof of their players’ eligibility. They were then left with one team that knocked out Sophia’s first team in the quarter-finals.

They were both left with one team each, and football fans came in numbers to witness their semi-final clash, which did not disappoint. Both teams played outstanding football and got the huge crowd entertained. Eagles led 2-1 until the last minute of the game when a dubious penalty was awarded to Sophia Stars to level matters.

This forced the game into a penalty shootout which was eventually won by the defending champions after sudden death.

Sophia was supposed to face City Pirates in the final, but that never happened as Sophia Stars and Eagles were found guilty of using players that were not eligible to play in the semi-final clash.

Pirates were then crowned as champions and will represent Makana in the Engen U18 provincial tournament.

Makana LFA secretary and competitions officer Akona Heshu explained the incident. “Sophia Stars have been disqualified in the tournament for using players not on their team list for this game but were part of the team that lost in the quarter-finals. Eagles were also found guilty of the same offence and were also disqualified, and the tournament rules guided this. This left us with no choice but to declare City Pirates as the champions.”

Pirates U18 coach Loyiso Platjie was excited. ” We came here to play with the legitimate U18 squad as I wanted them to learn, and I told them to play and enjoy the tournament and see what happens. It is sad to win in this manner, but rules are there for everyone to adhere to, and if you don’t follow the rules, there are always consequences.”

It was a very good spectacle for the spectators, and they enjoyed every moment of it. Makana LFA did an excellent job. The only thing they need to consider now is using identity documents in this tournament to help eradicate age cheating and other underhand methods.

Coaches and club managers need to be honest and teach these youngsters integrity. They also need to understand that the primary purpose of the tournament is development – trying to win at all costs is destructive when trying to develop up-and-coming footballers. If you want to win, learn to win fairly. Dishonesty will dent the image and integrity of the club and undo all your hard work.