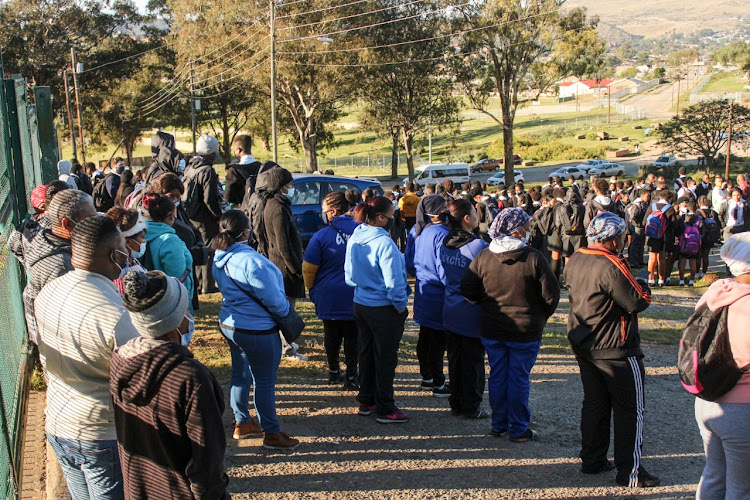 Parents stand in front of the main entrance to Mary Waters Secondary School in May 2021 and around 300 learners gather below. Parents closed the school after they discovered Grade 8s and 9s had missed out on teaching in four subjects since the beginning of the year. Similar scenes played out on Monday 25 April 2022 as the school continues to struggle fill vacant posts. Grade 10-12 Afrikaans learners had been without a teacher since the start of the year. Photo: Sue Maclennan

Mary Waters Secondary School parents and teachers gathered outside the school’s premises on Monday after parents had locked the gates in protest about the shortage of teachers at the school.

Mary Waters principal Alphonso Michaels said the school was currently without a permanent Afrikaans medium history teacher for six classes – three in Grade 10, two in Grade 11 and one in Grade 12 – and there are vacancies for a deputy principal and a departmental head post.

“The history teaching problem is more of an internal school issue rather than a departmental issue because the Afrikaans-medium history teacher voluntarily placed himself on the ‘excess’ list. According to the post provisioning norm (PPN) for the school, we had one excess teacher – and he volunteered,” Michaels said. He has now been placed elsewhere.

When the school was finally in a position to get a substitute teacher in March, applications were received, but from candidates who did not have the requisite certificates, Michaels said. “It has been difficult.”

The PPN is used by provincial education management to allocate teachers to schools according to specific criteria. Michaels said the PPN – also known as the ‘Morkel system’, after its inventor, Peter Morkel – did not work for his school as they teach in both English and Afrikaans.

“Our school is unique in that we teach in both English and Afrikaans as a medium of instruction. PPN does not take that into account. The dual-medium makes it difficult. That has been our main problem over the years. We have to provide for these Afrikaans learners.”

“The department says we have created this problem for ourselves. They suggest we teach most of our subjects in English but still offer Afrikaans as a home language. But, you will disadvantage the Afrikaans learner for whom English is an additional language. Originally this was an Afrikaans school,” Michaels said.

The school was shut down for two weeks in May 2021 following a struggle for more teachers at the dual-medium school after it was discovered that Grade 8s and 9s had not been taught four of their subjects since the beginning of the year. In June, education MEC Fundile Gade allocated two additional temporary teachers in addition to the post provisioning norm (PPN) for the school.

At the time, Gade acknowledged that home-language teaching was crucial to breaking the dominance of English in intellectual discourse. He admitted it was the State’s responsibility to find Afrikaans teachers. “Otherwise, we will be burying these kids alive because of language,” he said at the time.

Afrikaans matrics are writing a history exam on May 9, but they haven’t had a history teacher since the start of the year.

Michaels said a retired former history teacher at the school had agreed to volunteer as a teacher for the matric Geskiedenis (history) class starting this week. She will consider teaching the two Grade 11 classes, too.

“We also had an issue with isiXhosa Grade 8 and Grade 10 and a few Life Orientation classes, but we have also resolved that. We spoke to the circuit manager – an educator at NV Cewu has been declared in excess at her school and will join us this week. She will teach isiXhosa and LO.”

The contracts of the two temporary teachers appointed by Gade last year ended in December 2021, but the two teachers volunteered to come back to teach in January 2022. “From January to March, the school paid them a small stipend,” he said.

In April, district education manager Nkosinathi Godlo gave the school the go-ahead to re-appoint the two teachers. “That is still in process, but area manager Sizwe Betela assured us the appointments were with the finance department for processing,” Michaels said. Again, these are intervention posts that will expire at the end of the year.

Meanwhile, appointments for the deputy principal, department head and history posts will likely only happen by September. With just under 1200 learners, the teachers are already stretched to the breaking point. There are 45 learners in some classes. Educators are teaching for 93% of the school day – according to the department, teaching time should be between 80-90%.

Even Rhodes University support programs like 9/10ths struggled to find Rhodes mentors who were able to assist Afrikaans learners. Similarly, the Rhodes Vulindlela program provides SD cards loaded with learner support materials to all local matrics in no-fee paying schools, but these resources are English.

SGB crisis committee tried, unsuccessfully, to secure a meeting with MEC Gade to follow up on his promises